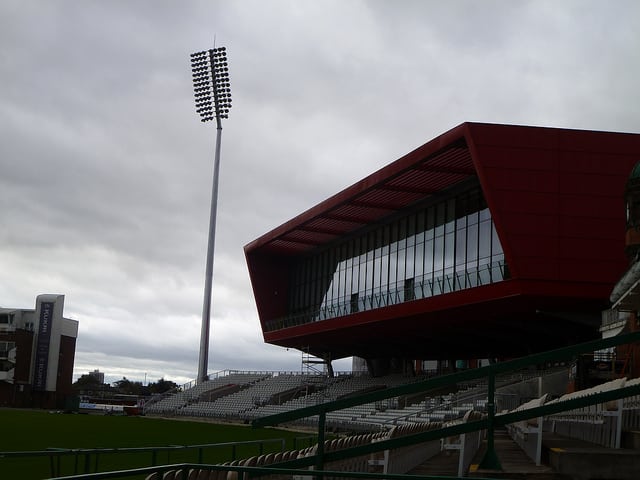 Grey skies were seen across the country, like at Old Trafford in this picture. Photo: welivecricket.com

Greyness and gloom tried their best to extinguish any hope of county championship finals day reaching the heady highs of this summer’s international cricket, but of course – test cricket produced the exact kind of spectacle that it does best: A gritty, unpredictable game of highs and lows.

Persistent rain and a batting collapse scuppered Somerset’s early hopes of winning their first county championship with a win at home to Essex. Tom Banton’s elation at his debut International T20 call up would have been spoiled by being removed for a duck by the imperious Simon Harmer. Their highest score was a painfully slow 43 off 132 balls from captain Tom Abell. One pleasant reminder of a certain sunny afternoon in Headingley was that Jack “Taunton Tendulkar” Leach was in-fact, not out.

Somerset needed 20 wickets on day four of the test to take their first county title, and with Sir Alastair Cook at the crease, this looked unlikely.

There was of course, some more Leach heroics in the way of the inevitable. Leach used the same spinning wicket that had made Harmer’s attack effective devastatingly well. Cook fell for 53 from a ball that turned and bounced dramatically towards leg stump and found his outside edge through to Craig Overton. Aided by fellow Leg spinner Roelof Van der Merwe they had Essex skittled for 141.

The sun came out and long shadows grew, there was an hour left of play at best. Somerset forfeited their second innings, setting Essex a target of 63 to win. If Somerset were to keep bowling the way they had been even the draw that Essex needed looked challenging. Cook dug in hard however, and despite Somerset setting a very aggressive field and making appeal after appeal at 17.21 with no sign of a breakthrough, the umpires called stumps and Essex won their 8th county championship.

It was not the same story as Surrey met Nottinghamshire at the Oval. A dramatic sky that blew in from the Vauxhall End mirrored perfectly the state of newly relegated Nottingham’s game. Facing a stinging 402-run declaration from Surrey and the loss of their opener and captain Steven Mullaney for only 21, stumps being drawn early on day three must have felt like a relief. No play on the final day secured the draw.

Oli Pope more than justified his England call up with his eighth first class century. Warwickshire vs Yorkshire was also a dismal draw, with Tom Kohler-Cadmore’s lighting fast 165 seeming almost out of place.

Every game on finals day ended in a draw. It would be very easy to see this as a washed out end to a heady summer for most cricket fans. Yet, as ever in the last few hours of play on an autumnal afternoon, test cricket proved how it can still be utterly gripping.