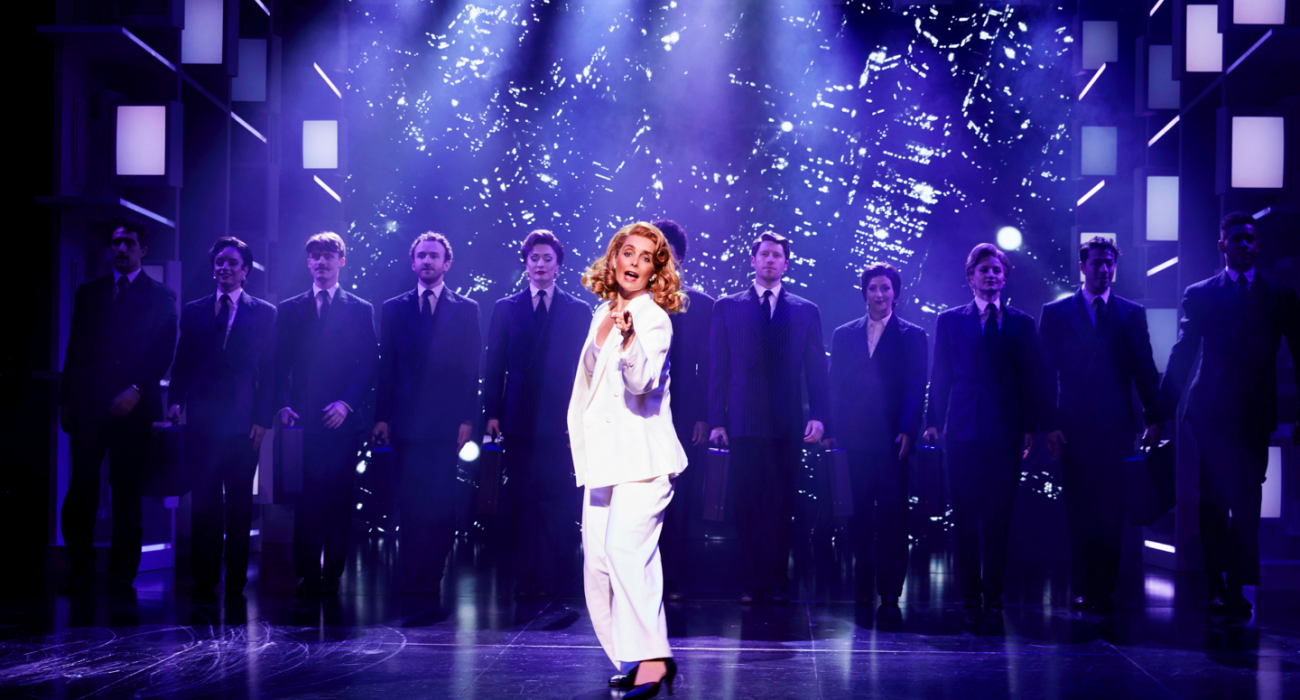 The 1980 film 9 to 5, starring Jane Fonda, Lily Tomlin and (of course) Dolly Parton, is brought to life in the stage-musical, currently running in the West End and touring around the UK. The tour stars Louise Redknapp (Violet Newstead), Love Island star Amber Davies (Judy Bernly) and Georgina Castle (Doralee Rhodes).

The main characters are set up as archetypes: the ‘uptight widow’, the ‘blonde bimbo’, and the ‘small-town girl’. However, each rebel against the audience’s (and society’s) expectations of them.

The performance begins with a narration from the queen herself – blonde bombshell and country music legend, Dolly Parton – through the form of a video-recording in a giant clock-face, followed by a catchy rendition of the title song.

The energy is palpable from the moment the punchy opening chords come in. The musical comes to life as Dolly and the ensemble break into the song that has become synonymous with Dolly and the working life grind. This cameo certainly added to the fun of the whole performance.

Louise Redknapp’s character had several moments of poignant self-reflection. Out of the three protagonists, she seemed to go through the biggest journey. From being a cog in a business machine to becoming the CEO of the company, she grew in terms of ambition. By allowing herself to fall into a new relationship after the passing of her husband, and by experiencing life as a single mother, the performance also portrayed the character as a woman finding her voice and power.

However, it was her ‘voice’ that slightly undermined this character’s portrayal. Unfortunately, Redknapp’s accent was inconsistent and at times off-putting and overshadowing of her acting. There was a twinge of New York and sometimes a California drawl, and sometimes, she just sounded British…

Davies and Castle managed to keep consistent accents throughout. Davies, with a reserved yet commanding voice, delivered some of the standout comedic lines of the show. The audience were in hysterics when she exclaimed that she ‘just miss[es] Dick’ (it is worth clarifying that Dick is the fitting name of her ex-husband).

Each of the three women delivered a knockout musical number. Repknapp’s ‘One of the Boys’ was vibrant and energetic. Castle’s delicate and effortless voice was perfect for ‘Backward Barbie,’ a number about being judged on her appearance instead of her personality and heart. Whilst she is not a ‘big name’ draw, and so her name isn’t used in promotion, her on-point character portrayal, comedy and beautiful voice made her the standout in this show.

Davies gave a powerhouse performance in the song ‘Get Out and Stay Out’. Her song felt not only like a triumph for her character but also a message to the haters who say you can’t be talented and the winner of a reality TV show.

She belted through the song, effortlessly hitting high notes. Some audience-members physically gasped at how she handled it vocally. The end of the song received a mighty applause and even the wiping away of some tears.

All those Love Island cynics can certainly be silenced now. This talented actress has earned her place on the musical theatre stage.

Credit must also be given to the play’s secondary characters. Sean Needham, who played the ruthless and slimy antagonist Hart, was at times a little cringey (though this was undoubtedly intentional), and at many moments sidesplittingly funny.

A particular highlight was when the three women strapped him into his own S&M attire and hoisted him up with the chandelier cables, leaving him dangling from the ceiling with a gag in his mouth. As the lights for the interval came up, Needham continued to hang there, shouting helplessly to the audience for someone to get him down. When the second act started, the curtain crept up to slowly reveal Needham’s legs still swinging back and forth, providing a stellar comedy moment in the show.

Lucinda Lawrence, who plays Roz Keith (Hart’s assistant and corporate spy), was fantastic as a loveable and weedy secondary antagonist. A highlight of the show was the number ‘Heart to Hart,’ where Roz fantasises about being with Hart through the form of a passionate tango, in which Lawrence rips off her dowdy office clothing to reveal a dazzling burlesque-style outfit and the two characters partake in a fantastically funny dance.

Whilst the musical was flawed, the integral message of female empowerment rang true. The conviction and talent of the entire cast, and the sheer joy and unapologetic fun, with a generous helping of cheese, blew the roof off the Palace Theatre and showered us in a dazzling spectacle of good ol’ fashioned musical theatre pizzazz!