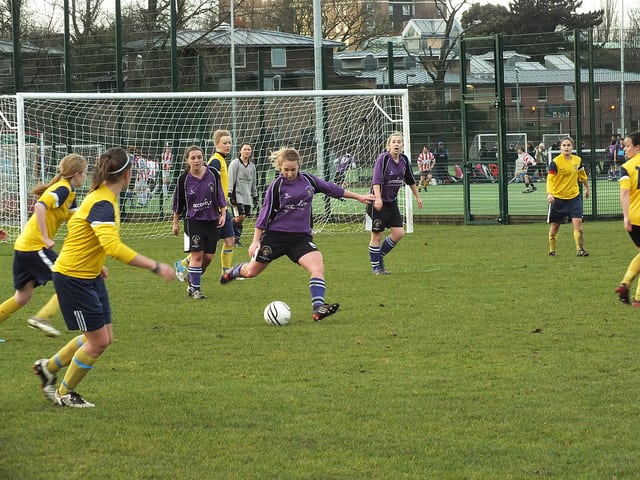 The campus league is a great way to get involved in some competitive sport, without the long away trips of official uni teams. Photo: Cil Barnett-Neefs.

As October rolls around a new season of the University of Manchester’s campus football got underway.

With players of all abilities playing for many different reasons, the campus league is a great opportunity for students to get involved in the Wednesdays afternoon sporting action.

The leagues are comprised of five divisions, each including a total of ten teams who play each other twice – with a cup competition running on the side.

In the Premier Division the question remained whether the Manchester Medics would once again dominate the campus leagues. It was a question they duly answered as the breezed past Athletico Dentico 3-1.

Elsewhere in the top division, the Owens Park First Team edged a thrilling encounter 3-2 over local rivals Oak House FC. Newly promoted University of Manchester Cricket Club FC quickly adjusted to life in the top league with a win over Geography FC, while the points where shared between Physics FC and Maths FC.

Dropping down to Division One and there was still plenty of football to feast over, despite MACE Athletico being awarded a walkover over Whitworth Park A’s, leaving the latter on -1 points.

ISOC have paired up with UMAS to create a joint team and it looks as if they have gelled quickly as they already top division one. The rest of the matches played have showed just how even division one looks to be, with six teams all sitting on one point.

In Division Two things look to be the complete opposite of the division above. The top five teams – from leaders Owens Park Two’s to FC Sheavyn in fifth – all are on maximum points, leaving the bottom half of the table all pointless.

However, with 17 games still to play there is a lot of football still to be played.