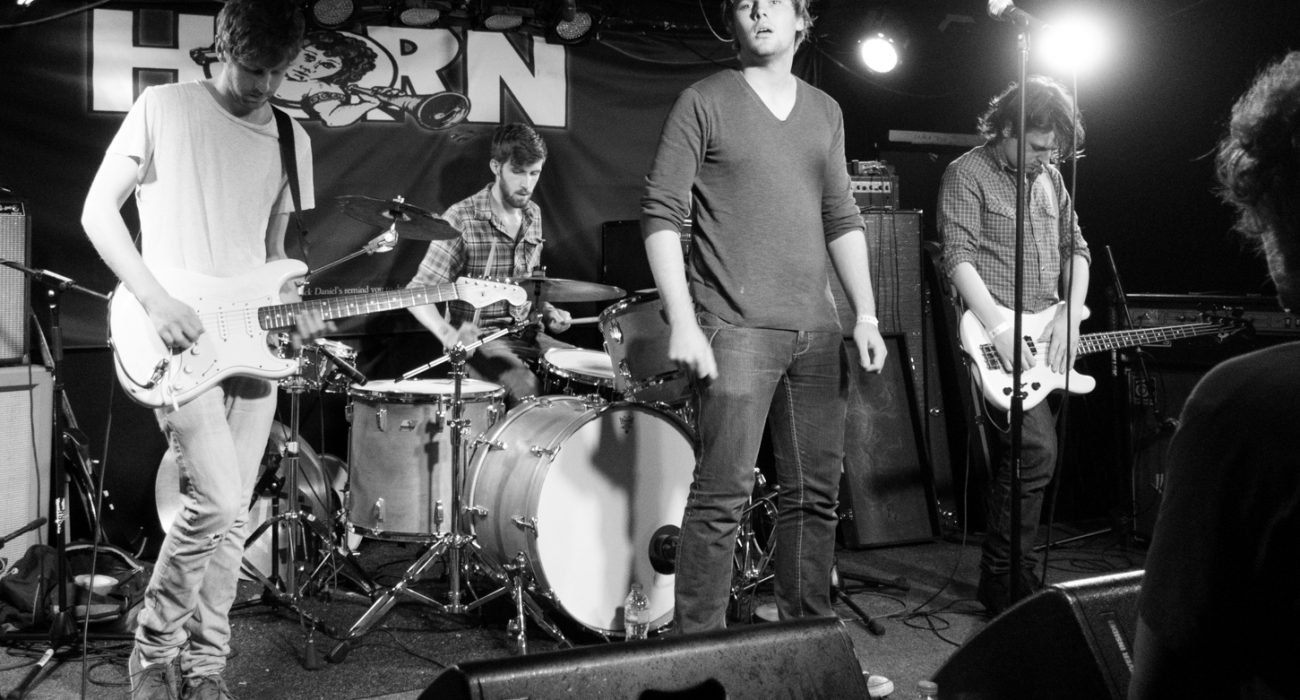 After an indefinite hiatus began in 2017, coupled with very little engagement with the public on the reasons why, there was little expectation of any kind of comeback from the Dublin-based noise-rock quartet, Girl Band.

But alas, almost two years after their last live performance, they announced the upcoming release of a single, ‘Shoulderblades’ – a sprawling, industrial, almost techno sounding track that acted as a reaffirmation of the iconoclastic nature of the band. The track combined the buildup-breakdown elements of some of their most iconic songs with a strange cavernous production, which ultimately results in what is perhaps their best track to date, hinting at what was to come.

Given the fact that the band took a hiatus to address the mental wellbeing of lead singer Dara, the fact that The Talkies seemingly represents the process of an extended mental breakdown fits very appropriately. The first track, ‘Prolix’, immediately tells you this is going to be an unsettling experience, consisting of Dara struggling to breathe during a recorded panic attack over an ambient soundscape.

This is then followed up by two of the album’s singles: ‘Going Norway’ and the previously mentioned ‘Shoulderblades’. The former is a noisy, chaotic mess that manages to remain rhythmically entangled despite the bizarre instrumental choices. In the latter half of the track, there appears to be a power drill in the mix which resembles some of the experimentations of No-Wave artists from New York in the 1970s.

Following the singles is ‘Couch Combover’, featuring Dara’s trademark nonsensical lyrics – “Got a semi in a hot topic sauna” –  in a surprisingly melodic delivery over a pulsating, raucous performance from the rest of the band, whose performances are equally commendable over the whole record.

‘Aibohphobia’ is a rather amusing moment on an album that sounds like the soundtrack to a haunted mansion. With lyrics exclusively in palindromes, the track title referring to the phobia of said palindromes, and the minimal instrumental seemingly being equally palindromic: a simple drum beat that becomes increasingly more cavernous and distorted as the track goes on. It is clear that the band have lost none of their wit that brings them above complete, abject chaos.

‘Salmon of Knowledge’ has an almost jazzy foundation with very laid-back drumming compared to the rest of the record, and indiscernible guitar/bass echoing in the background. Whilst it stretches itself over a monolithic 6 minute 20 second runtime, including a false finish, it doesn’t find itself slumping, and in the context of the record works phenomenally well. ‘Akineton’ follows, and is a caustic, noisy collage of various elements of the previous tracks combined with a jarring synth pattern. Before you can even become accustomed to the aural assault, it ends.

‘Amygdala’ is another short track, trading witty lyricism for complete babbling and nonsensical noises. The track pushes the limits of the listener in a similar vein to another acclaimed, deconstructionist release this year, Schlagenheim by Black Midi, albeit much more abrasively, with even less accessible instrumental qualities. Whether this appeals to the person listening, however, is a completely different issue.

Later track ‘Caveat’ is an eccentric combination of surprisingly groovy drumming and their trademark noisy whirls, showcasing their strange aptitude of creating danceable songs that sound completely unapproachable. This then suddenly transitions into ‘Laggard’, a droning track that once again echoes their No-Wave influences. An increasingly dissonant and intense buildup is paired with noisy stabbing interjections that then falls back to reintroduce Dara’s signature yelping, over a similarly unharmonious instrumental that again builds up in its intensity to a final abrasive finish. The somewhat discernible three-act structure of this track in particular really demonstrates what they’ve become known for in their brief music career, and shows that they most definitely are not willing to give it up.

‘Prefab Castle’ is the pinnacle of the album, a track which transitions multiple times over its near 8-minute runtime. Introducing itself with what sounds like the purring of a cat distorted into oblivion, it mutates into a glitched psychedelia, before shifting into a pounding noise-rock track. It then shifts again in its second half into nightmarish techno, sounding like it could have been taken straight off of the soundtrack to Gaspar Noé’s ‘Irreversible’. As this slowly fades away, we are greeted by the final track, ‘Ereignis:’ a calming, tropical sounding track, perhaps signifying the end of the mental turmoil that permeated the album.

The Talkies is a tour de force from Girl Band, taking the danceable, noisy grooves of their previous record Holding Hands With Jamie, but utilising them in the most coherent release from the band to date: a haunting, nightmarish exorcism of an album that hopefully establishes them as a figurehead of the current alternative wave, a title they already deserved half a decade ago.