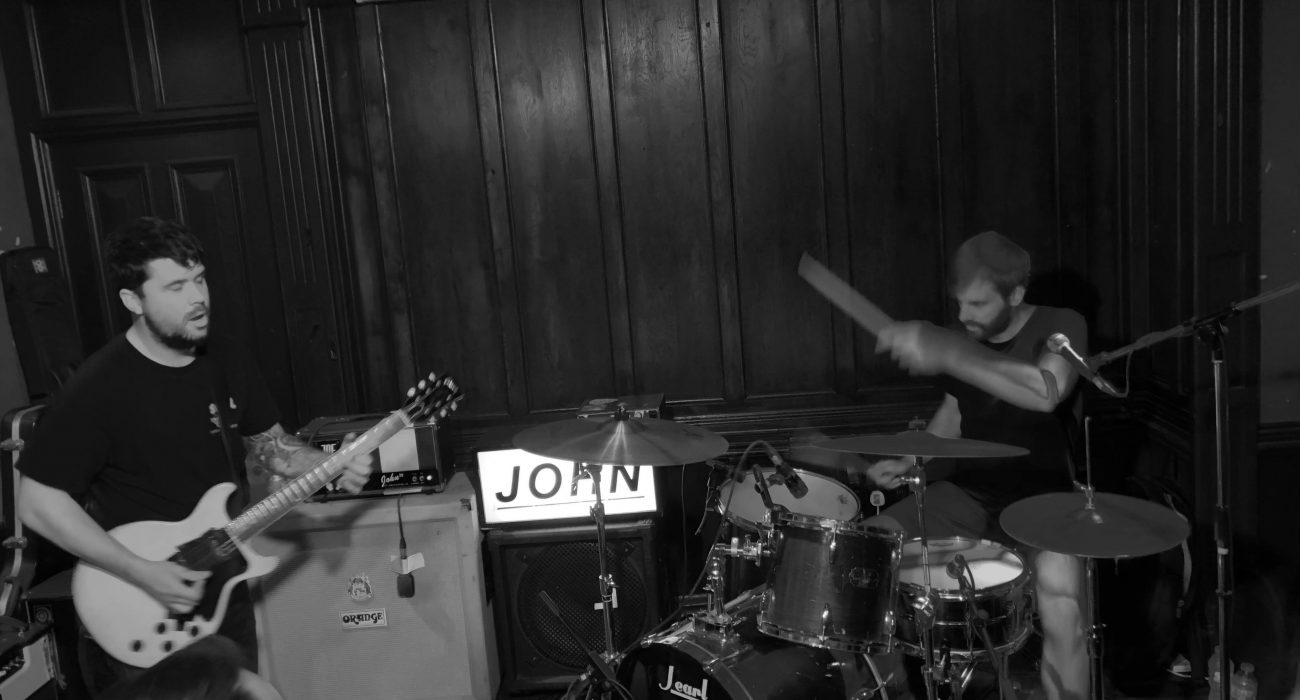 For any out of the loop, to Google the band JOHN, would be taxing. However, for those in the loop, you know to type (TIMES TWO) into the search engine.

As of recently, there has been a lot of amazing two pieces, and with the whole explosion of ‘Indie’ bands coming out of the woodwork, JOHN are worthy of amazing feats. Describing themselves as, “Four Arms, Four Legs, Two Heads, Wood, Metal, Plastic” could be a summary of a band taking the simple things in life and stretching them to such phenomenal extremes.

Their return to Manchester has been anticipated with the gig being sold out over a month ago. Additionally, the band’s second record Out Here on the Fringes was released the same day. So, after 12 hours of absorbing the new record, including the two singles gaining radio play with radio 1 rock show in the run-up to release day, listening to them live was nothing short of brilliant.

After a lovely and neatly wrapped opening from the drums and bass two-piece, Slap Rash, and a charming following from trio, Slow Hand Clap, we arrived at the main event.

There was no counting in or introductions as JOHN started their set, dropping straight into ‘Squad Vowels’. Johnny closed his eyes and gently nodded his head to the amazing riffs he created. Whereas John (Newton) with his entire being, pummelled into his drums, a massive grin forming as Johnny faces upwards.

The sheer visceral intensity of JOHN is already apparent, with John singing in rugged tones, firing on all cylinders at the drum set. Johnny standing by his faithful pedals, swaying back and forth with each purposeful strum, all of his being into all 6 strings.

As soon as the new material comes in with ‘Standard Hauntings’. A colossus of a riff, that has the room already bouncing with both shoulders of the front row of people moving, heads from side to side, fists pumping, sweat dripping- we’re only 5 minutes into the gig.

After a decent amount of water consumed in the minimal gaps between each song John dryly announces “Hi, Manchester. I’m John, He’s John (pointing to a tuning and smiling Johnny)- We’re JOHN” calmly. This kind of dry humour evident of a band, that clearly loves what they do, making really amazing music.

In recent interviews, they have often been described as “brutal,” “refreshing” and “perfectly produced,” sounding like descriptions to a new and exciting drink at the trending new tavern; However, JOHN carry a double-edged sword whereby their live videos, and to an extent their albums, don’t fully do them justice of what a truly fantastic live band they are.

They charge pragmatically through one song to the next, including the second single, ‘High Digger’. Johnny’s excellent use of an EHX “Chill Switch” throughout each song, but in no ways “Chill” as the name describes. Carefully holding back a torrent of sound, letting the clear yet piercing guitar lines have a moment, then a booming presence of the lower octaves through an adjoining amp combo, creating a full, rich and uncompromising sound that few can achieve. Further compounded by Johns primal, rhythmic fills, allowing him both the space to croon the microphone, and deliver carefully timed fills.

For a two-piece, a lot of people assume that it’s easy to be tight and effective. However, this is not the case, as if you mess up, it’s even more obvious with just two people. JOHN (other than an audience participation accident) didn’t put one single note or moment out of place, from ‘Squad Vowels’ through to ‘Solid State’. Even with a failing snare drum, sincere and memorable to the end.

JOHN will hopefully be coming back soon to Manchester, for even more ‘Brutal Refreshing Power’.