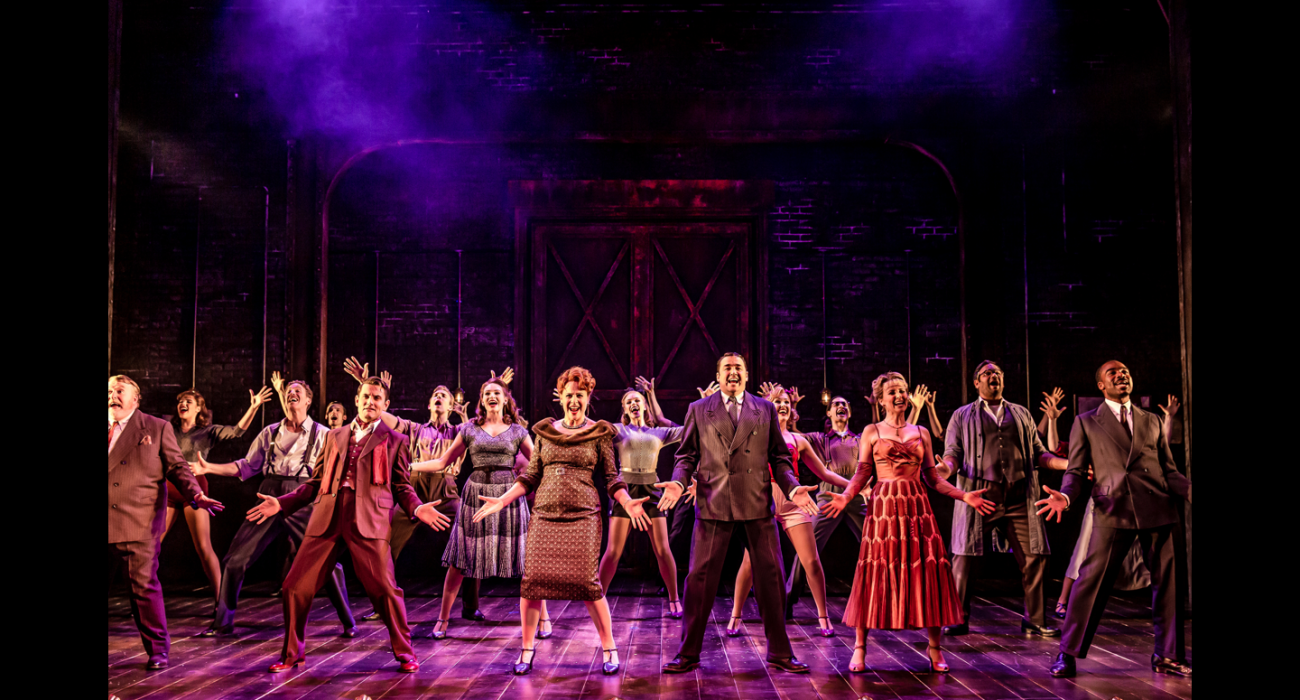 On opening night of Robbin’ Hood of the Old West, the supremely untalented leading lady, Jessica Cranshaw (Nia Jermin), is murdered. Before the cast and crew have the chance to leave the theatre, lieutenant Frank Cioffi (Jason Manford) arrives to investigate the murder. There’s only one problem – Cioffi seems to be more interested in starring in musical theatre than he is in saving the case!

The show opened with the show-within-the-show, in which the audience got to see just how terrible an actor Jessica is. Jessica then exited the stage, and the action was turned around, with the set now facing the back of the stage. This was a great way to stage the scene.

Jessica complained about being distracted by the man in the front row who kept waving at her, only to be told by the stage manager that he was the conductor! She then went back onstage for the curtain call and was given a bouquet by an audience member, but when she headed offstage again, she collapsed. Duh-duh-duh!

Whilst most of the show’s musical numbers were forgettable, there were some pretty awesome scenes. ‘Show People’ was a typical 20th century Broadway number; it felt nostalgic and familiar. ‘Thataway!’ was a great song to close Act 1, and the repetitive form of ‘He Did It’ was very entertaining. I also liked the Seven Brides for Seven Brothers-feel given to Robbin’ Hood of the Old West, though it was much more lively, raunchy and raucous than Seven Brides!

‘What Kind of Man?’, in which the production team wondered what kind of person would want to be a theatre-critic, was brilliant and had me wanting to slide into my seat and pretend I wasn’t there to review…

The show addressed the audience, and even the critics, several times, with the show’s producer, Carmen (Rebecca Lock) telling Cioffi that his comment on critics was very nice, to which Cioffi replied: “You never know who might be in the audience,” and the pair of them staring into the audience to great laughter.

The musical was undeniably funny, with each and every character given comic lines and delivering them perfectly. Samuel Holmes received the most laughs as director, Christopher Belling, an outrageously posh British caricature. He was witty to the point of sardonic. A hilarious moment came when Cioffi was discussing the murder and called out his name, to which he responded “I did it!”, but then apologised and told everyone he just has a habit of taking credit for everything!

The musical made lots of jokes about murder and death, which I felt a little bad laughing at, and seeing a man hanging from a noose could be a little unsettling for some audience-members, though this is a musical that does not intend to be PC at all. 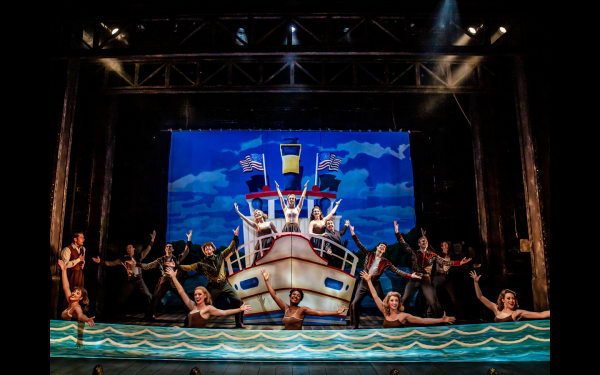 Whilst Jason Manford was the show’s lead, and did an undeniably superb job for someone not trained in theatre (like the rest of the cast), the standout performance came from Lock as Carmen. She was glamorous and mysterious, and you didn’t know whether to trust her or not. Lock’s singing, acting and movement were all flawless.

Presenter and Strictly winner Ore Oduba made a brilliant stage debut as Aaron Fox. Given he’s a triple threat, though, I would have loved to have seen some dancing from him. Andy Coxon will be playing the role of Aaron at certain venues; having seen him in West Side Story, I can assure you you won’t be disappointed that you’ve missed out on seeing Oduba. They’re both amazing!

Carley Stenson (Hollyoaks) was excellent as Aaron’s romantic and professional partner, Georgia Hendricks. Stenson is married to Danny Mac, who I’ve seen onstage twice (Sunset Boulevard and Amélie) and reviewed once. They’re a massively talented pair, and I’d love to see them onstage together (please, make it happen!). But Stenson and Oduba (who, funnily enough, beat Mac in Strictly a few years back) oozed chemistry and passion.

The musical had many twists and turns. I, personally, would have preferred a little less focus on the recreating of Robin’ Hood in hopes it gets better reviews, and a more focus on the murder mystery side, which I think fell a little flat. I would have liked characters to be made more suspicious and given more motives to murder Cranshaw, à la an Agatha Christie novel.

Curtains is an entertaining musical that doesn’t require you to think too much, and, sometimes, that’s just what you want.

Curtains runs at the Palace Theatre, Manchester until 12th September and then continues its UK tour into 2020.