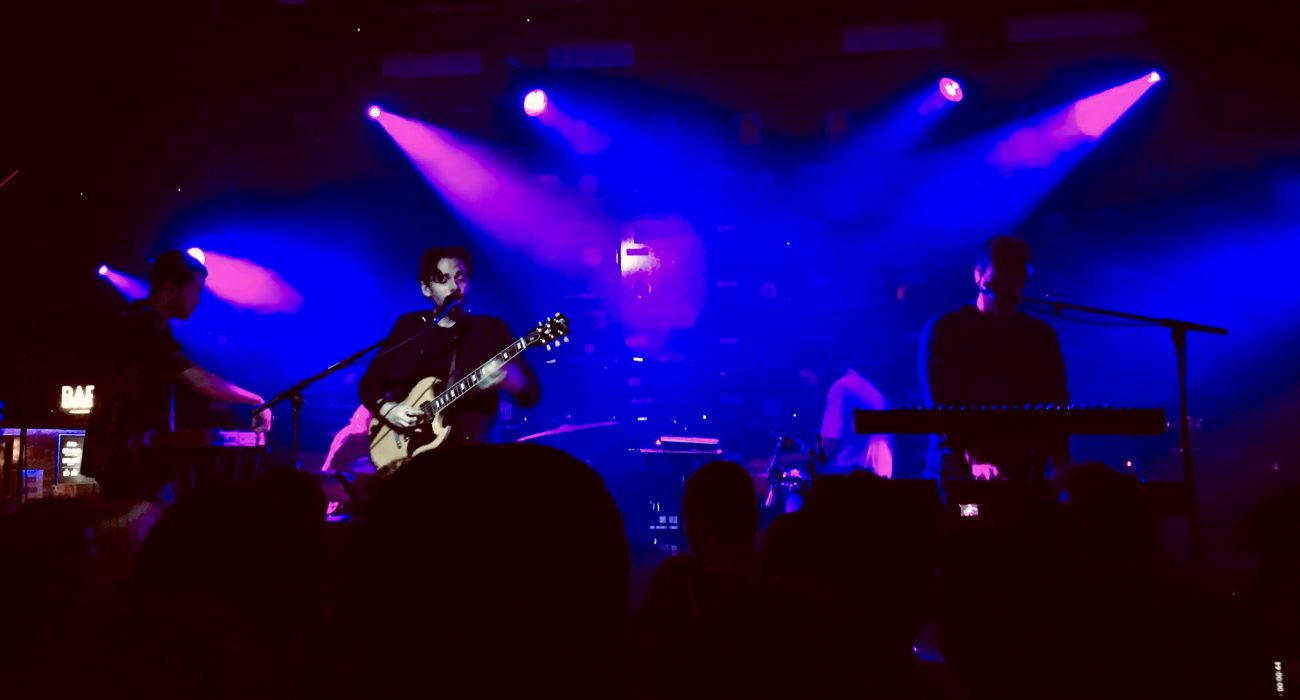 Entering their fourteenth year together, indie rock band Local Natives traded the glamorous streets of their hometown in LA for the unassuming arches of a Manchester railway bridge. With a sell-out crowd to impress, the band took to the stage to deliver a diverse setlist of harmony-driven rock music.

The wide variety in Local Natives’ extensive discography was immediately clear from the opening few songs. After ethereal opener ‘Vogue’ demonstrated the band’s delicate side then ‘Sun Hands’ brought crowd-surfing from lead singer, Taylor Rice, and the first drum solo of the night. The band’s energy was quickly and whole-heartedly accepted by a faithful audience, who added their own voices to long-term favourites ‘You & I’ and ‘Ceilings’.

Rare moments of quiet were observed by the crowd only to ingest the musings of Rice, who occasionally took time to introduce songs taken from the band’s 2019 LP, Violet Street. “This is a fun song about the apocalypse: act accordingly,” remarked the singer before unleashing the bass-heavy anthem ‘Megaton Mile’. Quite appropriately this saw some of the most euphoric dancing the crowd would achieve throughout the evening, with a last-day-on-Earth feeling dominating the room.

Fluidity in the band’s performance became a theme as they transitioned seamlessly into ‘Someday Now’, another new song greeted with rapturous applause from an ever-more excitable audience. Powering through four more high-energy fan-favourites, and the surprise addition of ‘Gulf Shores’, Local Natives were now coasting on the buzzing atmosphere they had so effortlessly created.

‘Dark Days’ and ‘When Am I Gonna Lose You’ closed the set in spectacular fashion before a short break was met with thunderous cheers. Not a single member of the audience even considered leaving the venue with the prospect of an encore lurking somewhere backstage.

This resolute ovation was rewarded with the band’s presence once more. ‘Shy’ provided a percussive, heavy-hitting start to a strong encore before the driving build-up of ‘Colombia’ gave spectators a chance to really empty their lungs. Finally, the night was rounded-off by ‘Who Knows Who Cares’, a powerful pop song with a finale fit only for this position on the setlist. It captured everything the band strived to display – flawless vocal harmonies, catchy hooks,  and great showmanship. This was an exceptional end to a well-rounded performance.

With three well-loved studio albums already at Local Natives’ disposal, it was bold to include nine songs taken from Violet Street. This decision, however, definitely paid off. The band’s new material arguably inspired the most animated dancing and it was apparent some members of the audience already knew every word.

In a modestly sized Manchester venue, Local Natives brought life once again to a music scene with a rich history. Their fun but well-rehearsed performance puts the band in a perfect position to become some of indie’s favourite veterans.