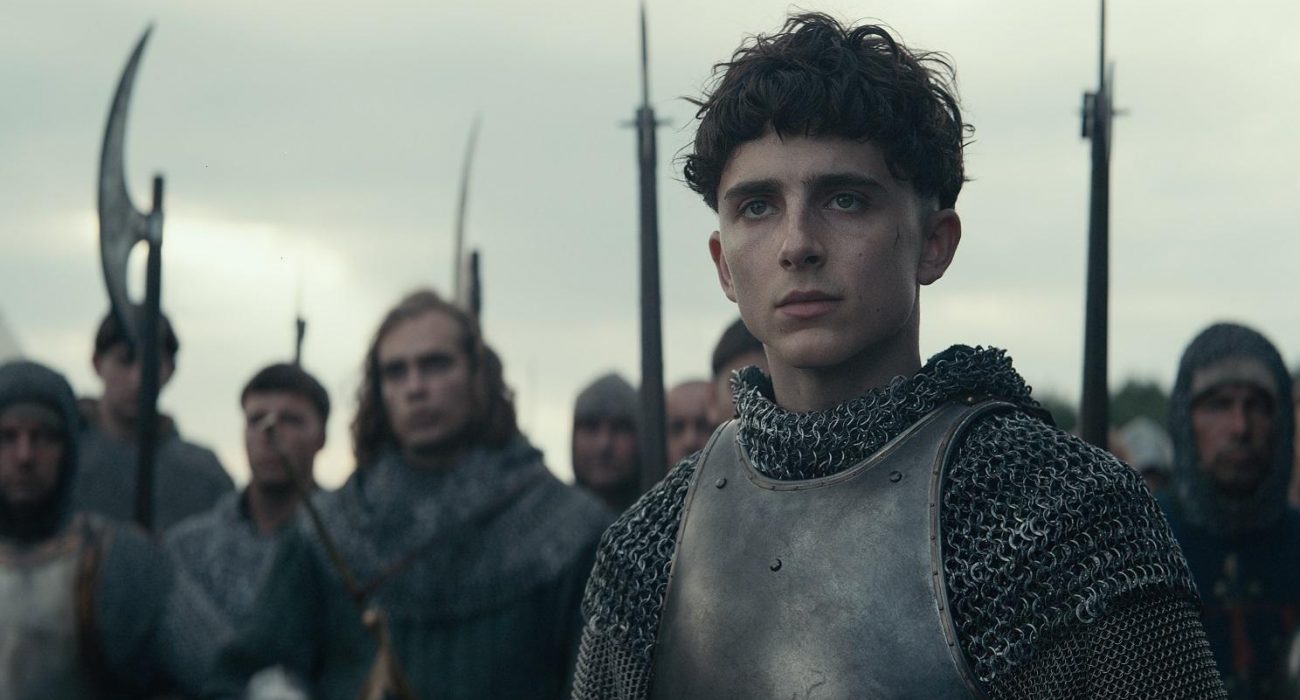 The new Henriad epic, The King, directed by David Michôd, is a vast, grand affair paying homage to the Bard.

Once more, Timothée Chalamet undertakes a role full of challenges and fleshed out characterisation with outstanding results. He shines from the start as a tricky young prince unwilling to inherit his destined position, before we witness his slow but sure ascent into kingship. In a similar fashion, Lily-Rose Depp snatches the crown in the last half an hour as the brilliant Catharine. With a derisive French accent full of mirth, she brings our new king down a peg in a moment of cinematic brilliance. The duo’s chemistry is evident despite the limited time spent together on screen, and they spark off each other with defiant brilliance. Another standout performance comes from Robert Pattinson as the slimy antagonist The Dauphin. He snidely snaps at Chalamet’s Henry in a low and evil French accent, causing you to wriggle at the unsettlingly sharp stare he treats the lens to.

Criticisms are already being made of the film’s length, casting it as a long slog that ruins Shakespeare. I would suggest quite the opposite; by snatching the best of the Henriad, slicing it into this contemporary format and setting it against a crisply cinematic format, full of action and bloody gritty scenes, Michôd updates the plays for a new audience. The film is a Netflix release, and a quarter of Netflix users are aged 18-24. While we all learn about Shakespeare at school and the texts are accessible widely, people rarely indulge in the Bard as much as they used to. By creating this Shakespearean epic in the fashion Michôd has, he has dutifully contemporised the Henriad for a world of streaming without sacrificing its brilliance.

Another note must be made of The King’s astonishing cinematography. Right from the start, the film shows it truly is made for the modern age visually. It feels designed for Tumblr gifs and Twitter photosets, with each shot immersive and vast all at once. The opening scene is a dim but gorgeous sky hovering over a finished battleground where we are immediately shown the bloody, gritty nature of the film. The King is certainly not for the light-hearted, and over the two hours we are subject to much violence and horror. But that goes with the medieval nature, the current presentation of war in the likes of Game Of Thrones that has proved so popular. There’s no shying from the consequences in The King, and you see Henry wrestle with such a moral dilemma throughout.

The King is a new form of Shakespeare adaptation, designed for the streaming age. It’s captivating and quietly classic, full of cinematographic excellence and a script made to be highlighted and stuck on bedroom walls. The star-studded cast is built to draw in the young, and I’d be interested to see how many youthful fifteen and sixteen-year-olds are dragged into the enriching world of Shakespeare that awaits them due to Chalamet’s exploration of his character. Overall, The King is a heavy film – you feel thought-filled post watch. Nonetheless, it is gritty, vast and theatric. It is everything one could want from a contemporary take on the Henriad, and Chalamet certainly is kingly.