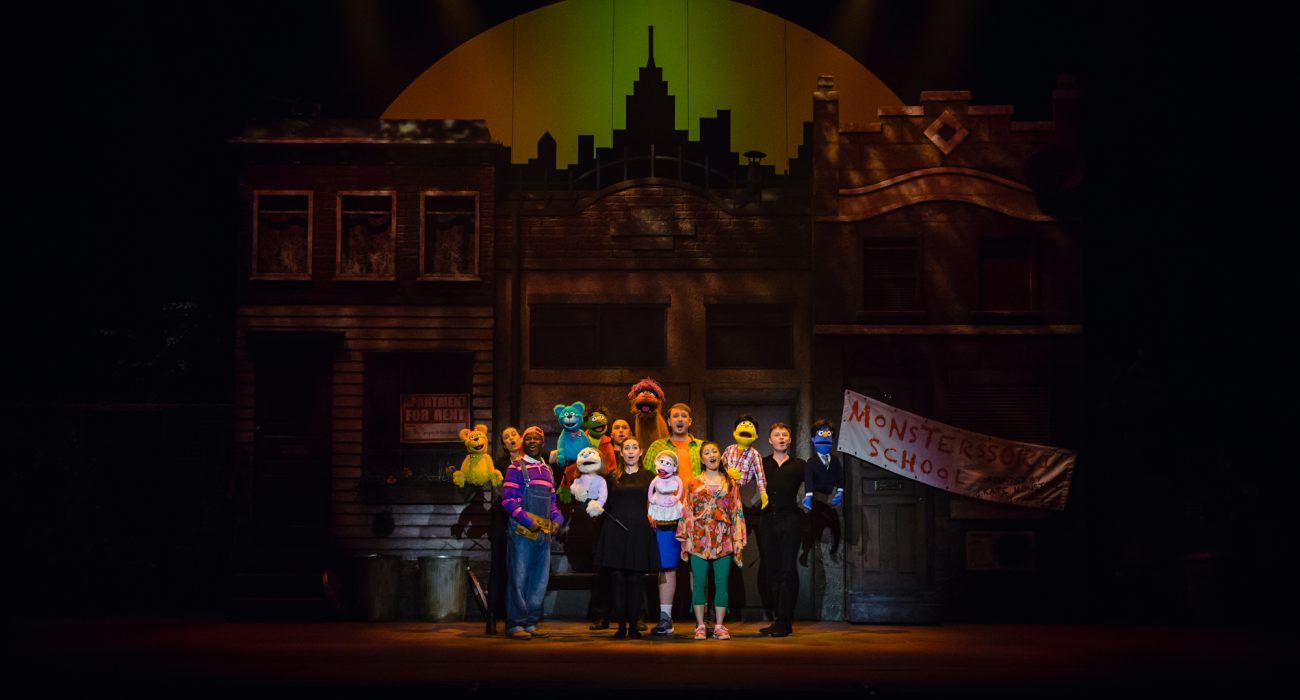 I’m not going lie, when I heard that Avenue Q was going to embark on a UK tour, I thought it was an (Avenue) Q-uestionable decision. A Sesame Street, Muppet-style puppet musical was not – emphasis on the past-tense – a show I thought was going to appeal to me or I would enjoy. After all, I didn’t need to add “fan of a musical with puppets” to my already dubious list of likings for a normal 21-year-old university student.

But, as they say, there is power in duality, so who is to say that I can’t seriously discuss my home country Ecuador’s current situation and, at the same time, enjoy foul-mouthed puppets singing extremely catchy songs? Literally no one, so I thought I might as well indulge in this whimsical experience of a show.

Avenue Q is a musical comedy featuring 11 puppets and 3 human characters that interact with each other Sesame Street-style. The puppets are controlled by puppeteers who go completely unnoticed by both the cast and the audience, surprisingly. They wear dark, unremarkable clothing, which is contrasted to the brightly coloured puppets made by Paul Jomain, with their colourful and obnoxious clothing, big googly eyes, and giant mouths.

The story is set on a fictional street (the infamous ‘Avenue Q’, of course) in an “outer-outer borough” of New York City, and it starts with Princeton, a recent university graduate who feels anxious about the uselessness of his English degree (“What Do You Do with a BA in English?”). He struggles with the harshness of adulthood and the fact that he is penniless, jobless and purposeless. He eventually finds an affordable apartment on Avenue Q where he meets his neighbours: Kate Monster, a kindergarten assistant teacher and the girl-next-door; Rod, a closeted gay man who also happens to be a Republican banker; Nicky, Rod’s messy roommate; Brian, an aspiring comedian; Christmas Eve, Brian’s Japanese fiancée and a client-less therapist; Trekkie Monster, a grumpy recluse who is addicted to online porn; and Gary Coleman (yes, that one), an ex-celebrity and the building’s superintendent.

However, besides the gut-busting humor, this musical is aggressively relevant and important. It touches on topics like acts of micro-racism, coming out, unemployment, homelessness, one-night stands, and, primarily, growing-up without fully knowing the harshness of adulthood.

As I always say, a musical is good when it is reactionary. When people cringe, laugh, gasp, or just generally feel whatever the characters are feeling because their story has become ours.

Whether human or monster, these characters reflect real-life people: the dreamer, the hopeless romantic, the porn-addict, the one with an identity crisis, the girl-next-door, the weird neighbour, the one with a useless degree. So, at the end of the day, you realise that we’re all part of Avenue Q. We have our struggles, our aspirations, and we all have that all-too-common feeling that we might be thrown into adulthood with a piece of paper, a gown, and no preparation whatsoever. By creating relatable characters, with an almost biographical narrative and insanely good songs, Lopez and Marx made it impossible not to react. And people did.

Throughout both acts, people have great fun, bopping their heads to the tunes and cringing when we had to witness – get ready – a puppet sex scene.

While the music, lyrics and story are brilliant in themselves, the show could not be what it is without its cast. Their versatility, creativity and talent are astonishing. All of the puppeteers play more than one role, but they do so in such a genuine and distinctive way that even when both of their characters interacted, you can easily recognise who was who. It is truly mind-blowing as an audience-member because it just makes sense.

I must give a massive shoutout to Cecily Redman, who plays Kate Monster and Lucy the Slut (yes, that’s the name of an actual character), for her amazing characterisations and delivering one of the most heartfelt moments of the show with her rendition of “There’s a Fine, Fine Line.”

Avenue Q is a relatable, funny-as-heck, whimsical musical, with annoyingly catchy tunes, witted lyrics, extremely talented performers, and a constant disorganised orchestra of laughter as a background. It’s a must see! It continues its UK tour into November.