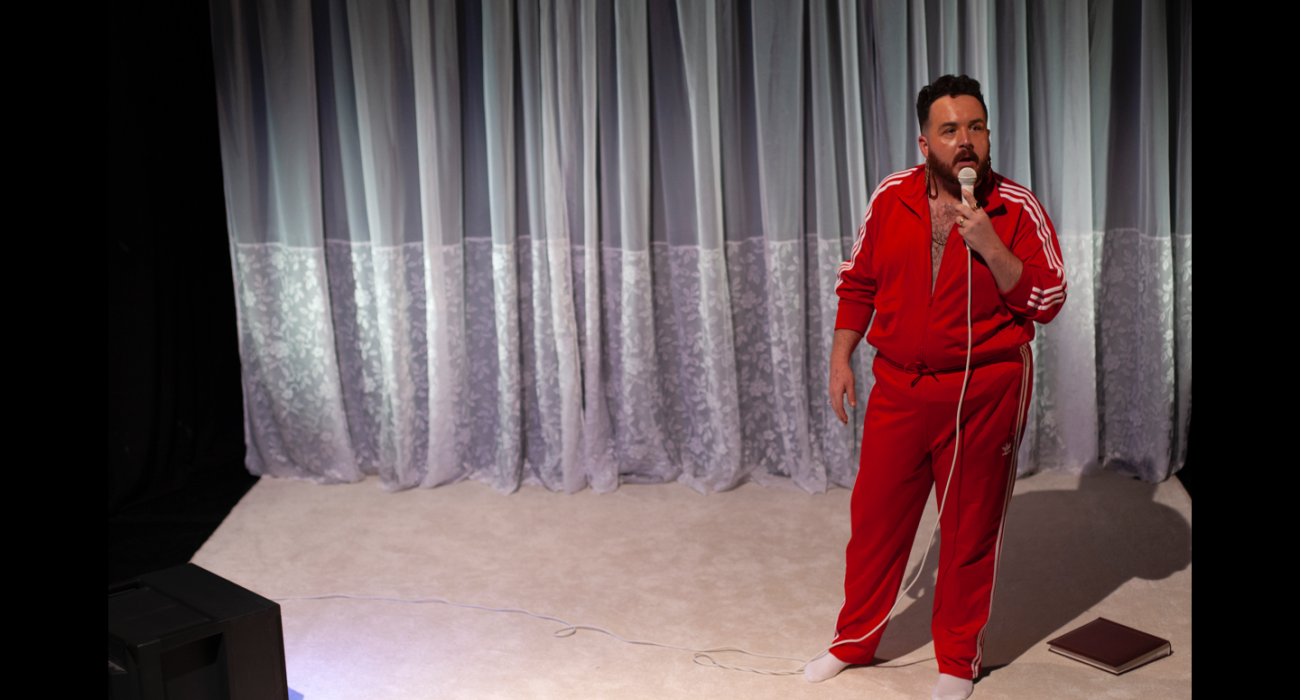 Returning to HOME theatre after last year’s Fat Blokes, Scottee makes the journey up to Manchester with his final solo show, Class. Taking over the main stage this time, Class is Scottee’s show “for the middle classes,” which sees him become unapologetic in embracing his working-class identity.

From the beginning, Scottee challenges the audience to confront their class privilege. He asks the audience to identify themselves as either working class or middle class by cheering at the appropriate times. It came as no surprise when the vast majority of voices cheered for the middle-class option. Scottee tells us that he expected such a result: “You know how I know? Because this is a theatre!”

He’s right: theatre is still a predominantly middle-class space. Scottee’s show rails against the privilege of the middle-class and the ignorance of how that privilege aids them through life. The very fact that Class is performed in a theatre is symbolic. By taking up centre-stage in a space usually reserved for the middle-class, Scottee makes a statement through his very presence.

Class makes the impersonal personal as Scottee forces the audience to recognise that class hierarchy is still a very real problem within the UK. With anecdotes from his own background, growing up poor in Kentish Town, and chilling statistics about poverty rates in the UK, Scottee takes something which many see as not their concern, and makes it so.

The show opens with Scottee making jokes and telling stories from his childhood in a way that prompts laughter from the audience. This narrative is flipped on its head as Scottee revisits these stories later on in the show, once the harsh realities of working-class life under austerity have been revealed. “We all laughed at that earlier,” he reminds us once the atmosphere has turned sombre and chilling.

The impact of Class wouldn’t be so hard-hitting were it not for Scottee’s masterful control of the audience and the atmosphere. With many call-and-response moments and audience participation, Scottee involves the audience throughout, tying them into his narrative.

The mood switches from lighthearted to sombre in a matter of seconds. Scottee would crouch lower as a tale that started off funny took a serious turn, and the lights would fade from yellow to blue as sinister sounding background music starts to play. Just as quickly, Scottee would then jump up, the lights would raise, the music lift, and the atmosphere restored as the show continued in much the same vein as before. This fast back and forth kept the audience alert, luring us into comfort just long enough to make it hit harder when the reality was shown.

Class makes a spectacle of its audience as Scottee draws on stereotypes of the middle class to highlight the way that the working class is constantly caricatured through media. References to Waitrose, detached houses and posh accents are plenty as Scottee allows the audience to experience what it’s like to be on the receiving end of such comments. The difference being, of course, that they will be able to return to their lives unaltered after the show is over. After all, what’s an hour of being subject to mockery compared to a lifetime?

There’s another question that runs throughout the course of the show, and that is the question of agency. We, the audience, chose to come and see this show. Those who are born into poverty do not choose it. Scottee asks us whether the working-classes need love or money the most, before stating that it’s atrocious not to think that both are necessary.  Even Class itself, he reflects, is a demonstration of how the working-classes are made to exploit themselves in order to live the same life that middle-class people take for granted.

This is the stance Scottee takes as he demands radical empathy from the audience. Radical empathy, recognition of privilege, and a question: why are we here? To pity? To earn ally points? To be grateful that’s not us? Or simply to empathise?

Although Class may be an uncomfortable watching experience for some, that is exactly the point.