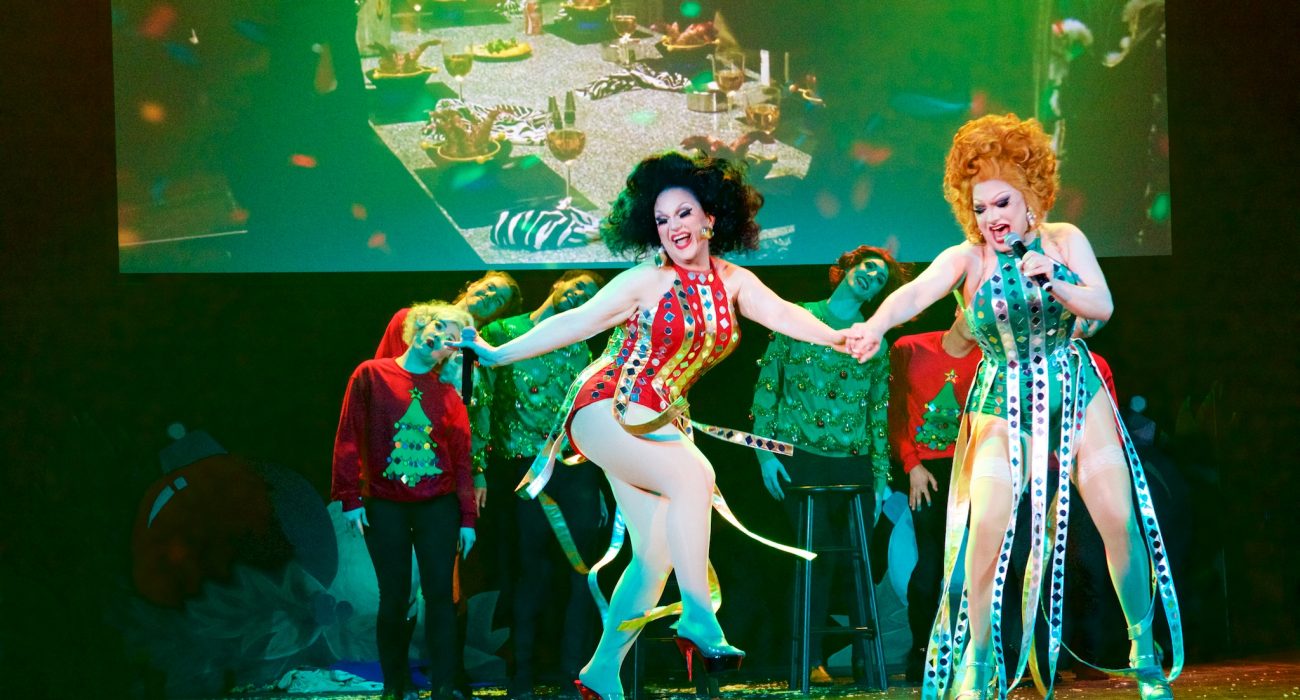 Preview and interview with Jinkx Monsoon, by Jay Darcy

‘DeLa is all sugar and Jinkx is all spice – but how do these two very different gals deal with the stress of the holidays? A little song, a lot of eggnog, and theaters full of people looking at them… Yup – all they want for Christmas is attention!’

All I Want for Christmas is Attention, which is presented by Contact, Soho Theatre and ATG, is a new Christmas-themed (obvs) show from drag superstars Jinkx Monsoon and BenDeLaCreme. Jinkx is best-known for winning season 5 of RuPaul’s Drag Race, whilst DeLa was Miss Congeniality in season 6, also appearing in the third season of RuPaul’s Drag Race: All Stars.

Both stars have performed in Manchester previously, with Jinkx performing here so frequently that she could change her name to Jinkx Monsoonchester, but this show sounds like it might just be their best one yet!

DeLa has also performed in Hocum Pokem but, unfortunately, not when it toured the UK. She did perform here with Jinkx, however, in Peaches Christ’s Drag Becomes Her, alongside Major Scales. It was a huge hit with drag fans, so I imagine they are all uber excited to see them reunite in a city with one of the best drag scenes in the world!

Jinkx told me that creating a new show with her long-time friend, BenDeLaCreme, is a ‘dream come true’. Whilst she and DeLa have very different performing styles, they have ‘very similar sensibilities’ when it comes to what makes ‘good drag’.

Last year, they created the holiday show, To Jesus, Thanks for Everything, which, unfortunately, did not come to the UK. Jinkx and Ben were very proud of this ‘entertaining and poignant’ show, which ‘summed up our complicated feelings towards the holiday season’.

However, this has created the ‘special challenge’ of trying to top what they created last year. But Jinkx is sure that, given she and DeLa are ‘perfectionists,’ All I Want for Christmas is going to be spectacular – even if it kills them!

Interview with BenDeLaCreme, by Evie Appleson

The interview began with confirmation that BenDeLaCreme is just as charming off-screen as she is on-screen. The delightful drag queen, who first captivated UK audiences during her appearance on season 6 of RuPaul’s Drag Race, answered the phone to my rambling flusters about trying to find the right dialling code to call Seattle. She graciously comforted me that she was once stuck in a London airport for an hour having not understood UK phone numbers correctly. This immediately assured me that her considerate nature, which comes across in all of her work, is entirely genuine.

She proceeded to let me know what audiences can expect from her upcoming UK show with Jinx Monsoon – All I Want For Christmas is Attention which will be exploding on to The Palace stage on the 1st December. Her description promised a full spectacle production combining music and humour with impressive visual impact. The fun, camp aspects of the show will encapsulate both the drag tradition with UK pantomime. This makes it the perfect show to welcome the Christmas season to Manchester.

I was touched by DeLa’s comments that the show would also explore some of the more difficult parts of the holiday season. With great sincerity, she explained that Christmas, with the focus it puts on family and Christianity, can be challenging for some queer people. She stressed that comedy has always been central to Jinx and her’s language: they see it as the best mode to convey more serious messages to their audience. I am certain that this show will be not only be funny but also provide a compassionate reflection on significant issues.

All I Want For Christmas is Attention marks BenDeLaCreme’s first international producing credit. Her determined, tenacious attitude was evident as she told me about the process of taking the show from a local Seattle audience, to a national, and now an international audience. She expressed how empowering it is, as a queer artist, to have full agency and control over her own work.

Finally, I asked her about her hopes and predictions for the future of drag. She eloquently explained how drag in all its iterations (comedy, theatre, music and art) has always functioned as a magnifying glass over society. She believes that drag is and will continue to be a sharp, witty commentary on the world around it. Drag breaks rules and boundaries whilst warmly welcoming anyone who wants to form their own connection to it. After having the pleasure to talk to BenDeLaCreme, I am sure that All I Want For Christmas is Attention will be no exception, and I for one cannot wait to see it.

All I Want For Christmas is Attention will play at the Palace Theatre on 1st Dec.