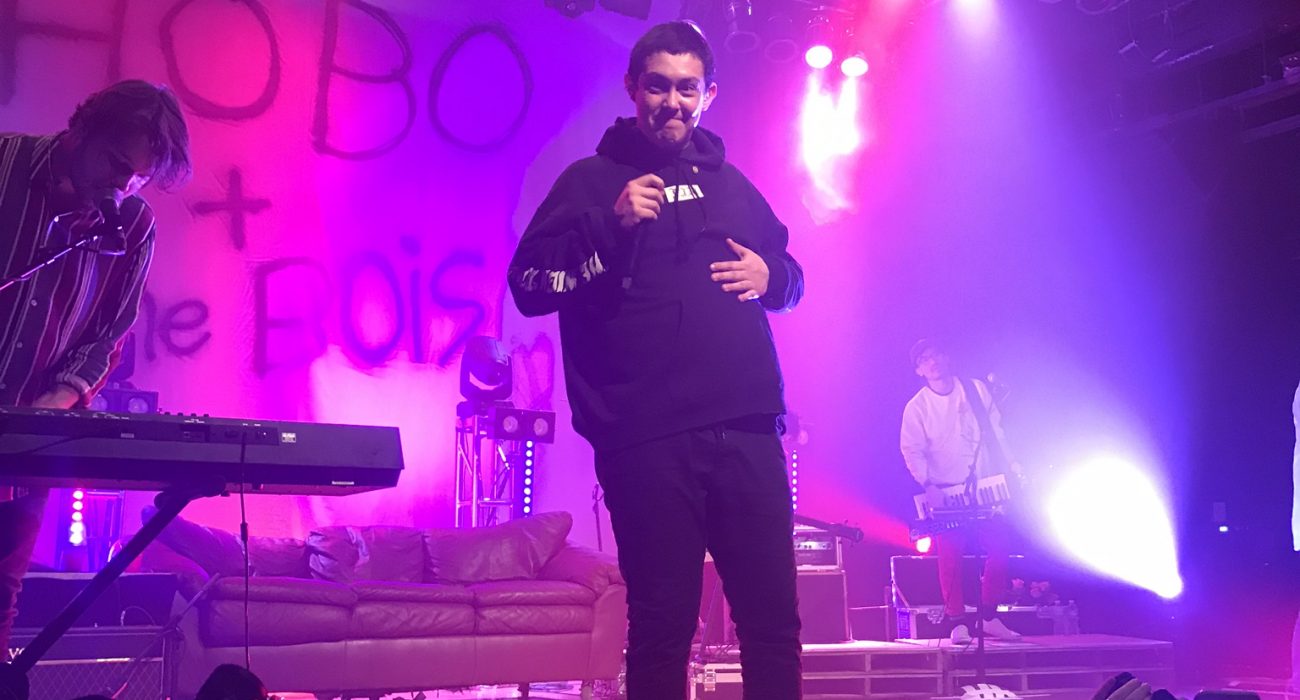 “To Hobo Johnson, Earth’s imminent demise won’t be because of climate change or nuclear war. Instead, the apocalypse will arrive the next time a girl he likes doesn’t text him back”. This is how Pitchfork opened their recent album review of The Fall of Hobo Johnson, demonstrating just a fraction of the criticism that Frank Lopes Jr. receives from popular music publications.

Yet with such negative press, how did the Lovemakers frontman secure himself, all within a year, an American tour, European tour and a headline spot on the festival republic stage at Reading and Leeds festival earlier this summer?

From humble beginnings producing music out of his car while homeless, adopting the alias Hobo Johnson, Lopes’ musical career has come far more from DIY beginnings than the ‘bedroom beats’ creators such as Ratboy. This alternative start to music has become the recurring theme in all things Hobo Johnson, from his patterned shirts, to his open admittance of his core shaking fear of death and the unknown. The creator of the viral hit ‘Peach Scone’ is anything but your ordinary musician.

It is this alternative nature that earns him love and respect from fans and less prevalent media sources such as NPR, whose Bob Boilen’s Tiny Desk Concerts competition gave Hobo Johnson and the Lovemakers their big break as their entry ‘Peach Scone’ exploded to the current point of having over sixteen million views on YouTube. It is also a weird-ness that has resulted in him being an artist that many people love to hate, but that’s exactly why many love to love him too especially his latest record.

Frank Lopes Jr detailed his desire to “make sure that every song on his new album sounded different” to NME, before the release of The Fall of Hobo Johnson. This is certainly something Hobo Johnson delivers on, and delivers well. The record was released on Friday the 13th of September earlier this year, and delivers everything from heartfelt ballads such as ‘Mover Awayer’ to a live rendition of ‘February 15th’, an acoustic performance desperately exposing Frank’s loneliness. The album also includes political commentary flavoured with Hobo Johnson’s own personal brand of humour in ‘You & the cockroach’. It is not often that a musician releases an album so varied and unique, yet so coherent, with some of the more peculiar sounds included in ‘Moonlight’ and ‘Ode to Justin Bieber’ complimenting the almost punk opener ‘Typical Story’.

Each and every song produced by Hobo Johnson seems destined for the stage, with live performances being where Frank reaches his peak and delivers his greatest sounds, supplemented by his band the Lovemakers. In the modern age of music streaming an artist sounding their best live can be a detriment to both their careers and their fanbase, yet, this is something Lopes Jr almost embraces. Constantly on tour with the Lovemakers, the quality and captivity of Hobo Johnson’s live performances are something that earns him almost as many new fans at festivals as being featured on Spotify viral playlists and the billboards heat seeker chart.

This is all due to the real emotional connection that Frank Lopes Jr is able to convey; exposing his own vulnerability and difficulties in life shows a real dedication to his music. Even in 2019 it is not often that men are celebrated for their vulnerability. Talking openly about his hopes for life in ‘I want a dog’ has earnt Hobo Johnson more than enough critics.

Hobo Johnson represents a potential turning point in modern music where men can talk about their feelings; this alternative can really be individual without having to be the same as everyone else that’s alternative. Breaking the mould of what an artist should look like, sound like and write like is something many people simply aren’t ready for yet, but for those who are Hobo Johnson has it all.

Featured in Forbes, reviewed by NME, Pitchfork and The Needle Drop by Anthony Fantano, Hobo Johnson has come a long way from the back of his 94 Corolla. Although he may have his critics, there seems to be no stopping Frank Lopes Jr and his European Fall tour this year isn’t one to miss. For every reason that makes him an individual, critics find another reason to hate on Hobo Johnson. But for every reason thst Frank Lopez Jr is critiqued for, there’s another reason you may just love him for.

Manchester has always embraced the alternative; holding those who are different high, and celebrating what makes each of us individual. This is something I feel shows that this fine city should be at the forefront of giving artists like Hobo Johnson a chance – a chance that, once given, isn’t likely to be regretted.