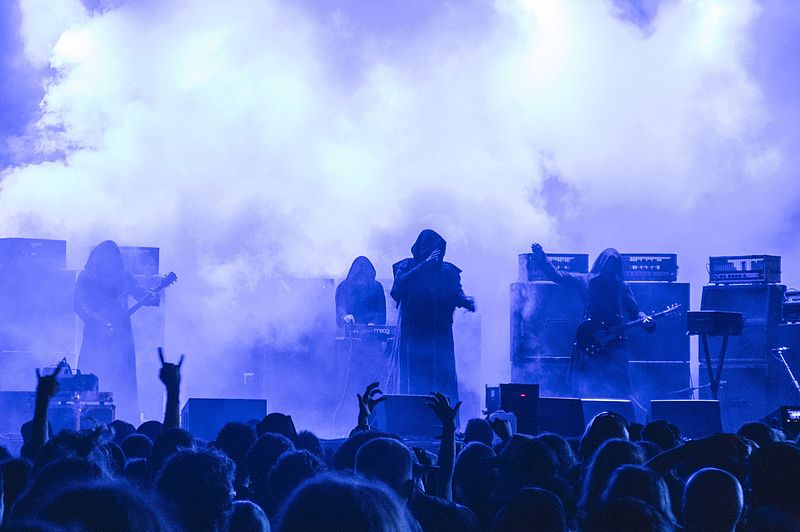 Formed in the late ’90s in Seattle, Sunn O))) seemed to appear in the peak of the US grunge explosion.

Pronounced ‘Sunn’ (owing their unique namesake and logo to the Sunn amplifiers brand), the group is composed primarily of Stephen O’ Malley and Greg Anderson. They began playing what is now termed as Drone Metal, quickly becoming figureheads of the genre along with experimental metal as a whole.

To describe Sunn O))) in simplistic terms, one would just have to unleash the ‘air guitar’, strum on the lowest note possible and hold it for 30-40 seconds with a ‘drunnnnnnnn’. But this is not always justifying to their music, and from the audience at the gig, they were there for something else. Sunn O))) is definitely not a band to dance to. They are a band to be witnessed, experienced and, as their tote bags suggest, to “breathe a frequency”.

In their wide array of albums, including this year’s epic releases, April’s Life Metal and October’s Pyroclasts (both recorded and engineered by the one-and-only Steve Albini) they offer tastes of their unique and ungodly sound. Yet their sound might not appeal to all. Where most music needs melodies and hooks, Sunn make up for in sheer volume and texture, best experienced, like all bands, through live performances where listeners can experience Sunn at their leisure.

Live, their music greatly intensifies through the dry ice and the sheer vibrations on every surface of the venue. Many of the audience close their eyes and lean back, rest themselves and appear to be mediating. Over 20 amplifiers are on the stage at full volume, to the point where if you put a drink down, there would be multiple ripples on their surface. Yet through the intense tones, akin to a mighty demon roaring in your face, this is all strangely hypnotic. Many of Sunn’s releases have a similar affect; however, many similar bands fails to replicate this live. To see Sunn O))) live is a transformative experience and, despite an hour and 45 minutes passing from the first note being played, when they finish and the lights have gone full circle to where they began, it only feels like 20 minutes has passed.

Even the beginning of the evening itself, with support band Anna Van Hausswolff, was a ferocious yet ephemeral performance. Echoed vocals, harsh pummelling rhythms, and waves of synthesisers being blasted from the stage created a blanket of noise, ruffled by the shrieks of sound, startling the listener but still maintaining a sonic bliss. After a magical arrangement of sound and fury, Anna and the band politely thanked the audience and left the stage, getting ready to witness the full fury of 20 amplifiers that were set up behind them.

In the brief interval between bands, even without the PA system on, and only the on-stage amplifiers halfway across the hall, a tuning note was played; vibrations through the floorboards were felt through the body upwards to the brain, every muscle tensing yet relaxing, almost like physiotherapy. Along with the sheer volume, low rumbling frequencies, echoing through the natural reverberation of the Albert Hall, there is not a more appropriate place sonically for this band in Manchester.

Since their last tour though, they have had a dynamic moment. With brief yet awesome moments in which a trombone, behind the robed guitarists, played through a reverbed microphone to change the timbre of the set from less of a roar to more of a call, the guitars lost a layer (or two) of sound to give it some breathing room. However, there was still not a moment of silence from either of them, or any less vibration on the steps to which the audience sit.

In all of the performance, fog was pumped into the room shrouding all members of Sunn, the lights bouncing off the fog and equipment creating strange yet wonderful shapes in the air, further distorted by the soundwaves until at the close of the eve. Both Greg and Stephen placed their guitars atop their amps and eventually let them fall behind, only to go and raise their arms in triumph and thanks to the audience as the sound eventually faded and the gig was over.

Sunn O))) themselves, again, legendary performers showcasing both the loudest and most capturing noise ever to be heard and seen, are without a doubt worthy to watch. 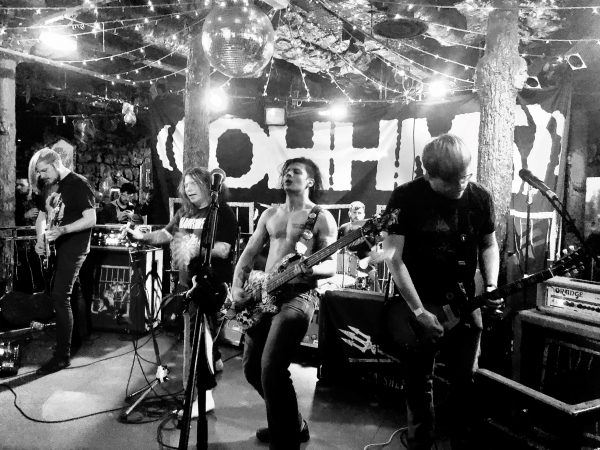