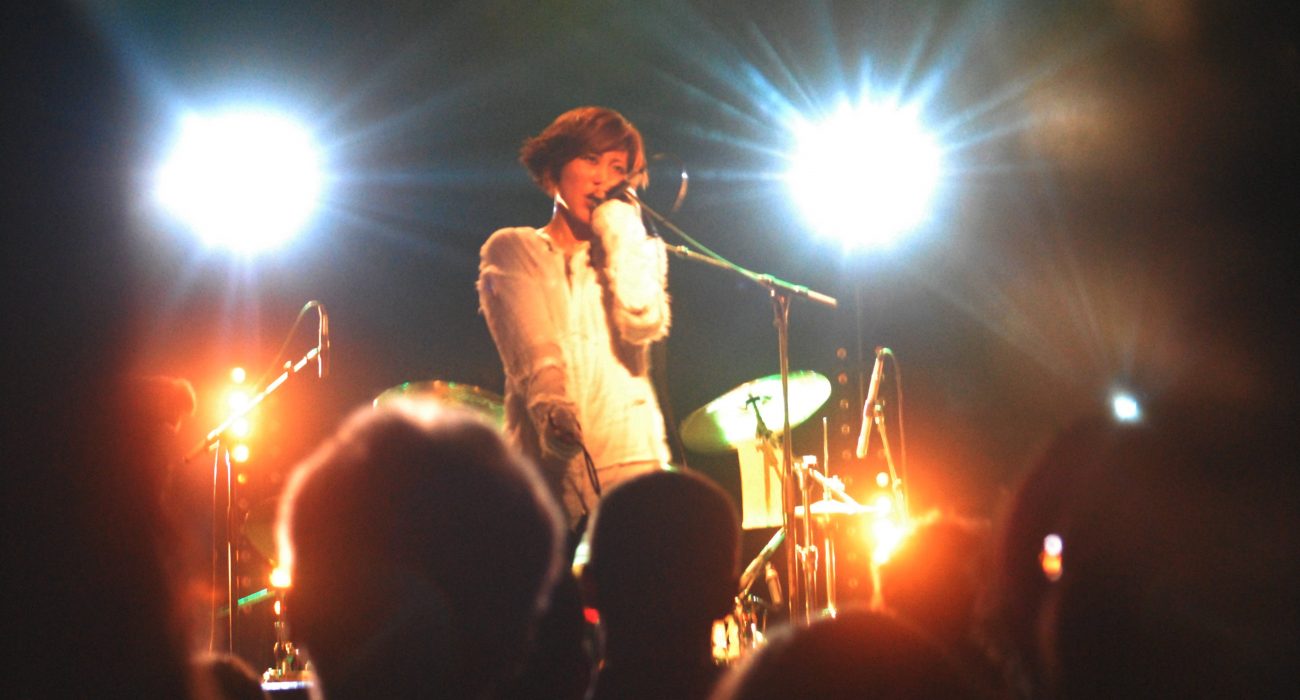 I think that for every gig-goer there is a belief that you won’t need to wear ear-plugs. However, when going to see Melt Banana, even on a Monday night, you will regret not having them.

In the early nighties, on yonder side of the globe in a noise-rock mecca, Tokyo, we find the origins of Melt Banana. The band have released multiple albums and collaborations, touring extensively with the likes of Mr Bungle, Napalm Death and many more. Despite all these years in the game, they have shown no signs of slowing, fatigue, or losing their unique sound.

It was an early start, for a weekday gig, with Melt Banana taking the stage at 9:15 PM exactly. The room was already buzzing. Vocalist Yasuko O and guitarist Agata took to the stage in front of a raucous audience, consisting of a fruitful mix of people: fresh-faced fans in their early 20s, more aged hardcore punks at the barrier, individuals in fluffy animal hats, and a lively fellow in a full-body banana costume (to which Yasuko points out “there’s a banana there, and a panda”). Most of these were in the mosh pit by the encore.

For Melt Banana their reputation was lived up to. Yasuko O waved a colorful remote in her right hand and positioned her microphone at angles to resemble a cross between a J-pop idol and a warrior dicing though the air in elaborate movements. Agata, on the other hand, had two pedalboards, multiple amplifiers, a SG, and a surgical mask. This resulted in a sound less like a guitar and more like a SEGA megadrive plugged into a high voltage speaker system and revved up to breaking point. Jolting and shaking as if bolted to the floor and desperately trying to free himself, high-pitched oscillations could be heard in the background as Yasuko was underway with the first batch of songs.

The band played many tracks from their 2013 colossus of a record, Fetch. Songs such as ‘The Hive’ and ‘Vertigo Game’ consisted of fast-paced rhythms and catchy, yet impossibly, noisy hooks resulting in the audience jumping and shaking to the beats. In most cases, bands who typically employ sequencers and backing tracks in place of members often use them as a creative crutch that leaves an artificial experience at gigs. This is not the case for Melt Banana who used these devices as a strong and awesome weapon. The EDM hardcore pulsed out from the PA at Gorilla, which only added to Yasuko’s yelping and high-pitched singing alongside Agata’s style of guitar tones and playing.

Twenty minutes into the gig, Yasuko O grabbed the microphone stand with a small list of songs taped to it. Clutching her sequencer remote, she politely announced the title of a song and both members launch into it. However, 10 seconds later, it was over. They repeated this numerous times, the crowd finding it charming and hilarious, and not without substance.

As the night continued, there were a lot of songs to be played through at ‘blink-and-miss-them’ tempos. This was an odd gig in a few ways. At the beginning of the night with the sounds akin to a Dance Dance Revolution Game that’s gone haywire, not many of Gorilla’s clientele were dancing beyond the modest head-nod. By the end of the night, however, all sorts of people were running and smiling, chanting and cheering. A lot of bands will tell you different stories but there is often a theme of audiences, and Melt Banana won over Manchester in the end.

Closing the night, giving an encore of the most energetic, off-the-wall rendition of The Damned’s ‘Neat Neat Neat,’ Agata slowly looped the main riff, and within seconds the room is electric. Yasuko O strutted and posed as each line was yelped, and Agata was constantly moving in all directions with ease and stood atop a Moog Wah and a classic Digi-tech Whammy at highest pitch.

Closing the night to ‘Candy Gun’, played with an anthentic hip-shaking bass line, interspersed with blast-beated EDM and a poppy hook and structure. A feat for any band in noise and one of the best two-pieces of the genre. Reflective of how unique this band is, and how this should be a bucket-list band for anyone who wants to venture into the wonderful world of Noise.