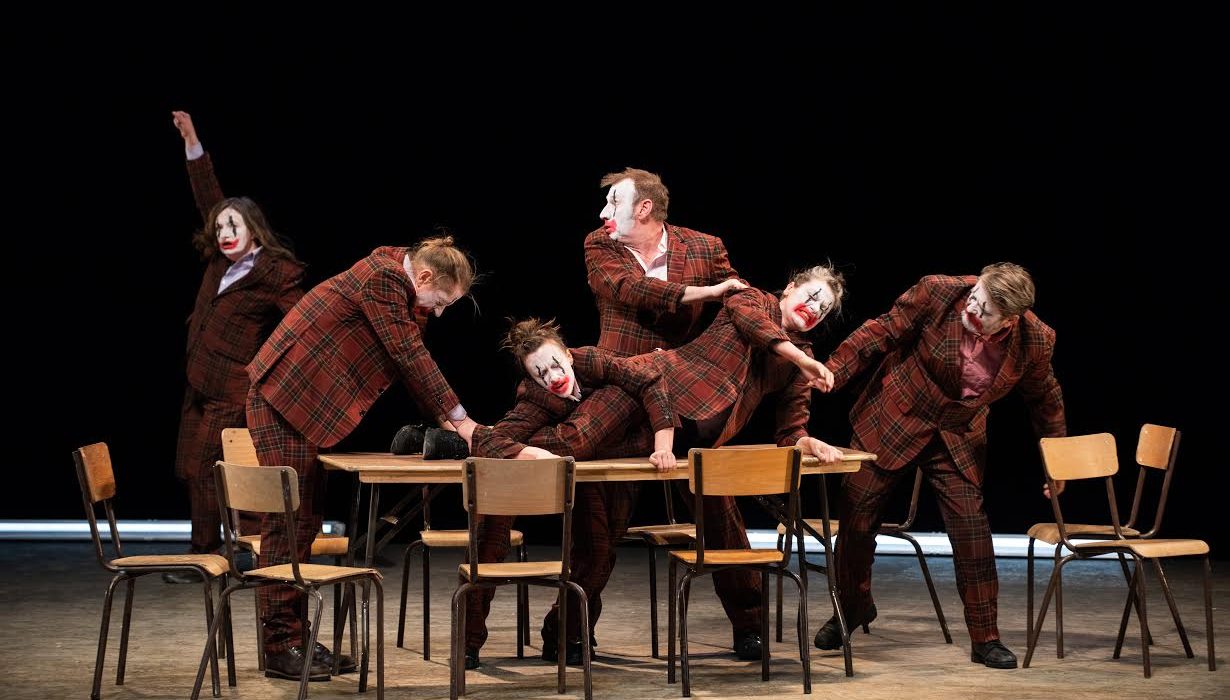 Review: Out of Order

Performed on the main stage at HOME Theatre, Out of Order is an absurd, thought-provoking and funny production which pushes the limits of what theatre can be.

Five clowns emerge from behind the red curtains draped across the stage. Breaths are held as the clowns take a seat. Music begins to play – and then chaos erupts. The clowns chase each other, seemingly having no control over their own actions and impulses. When the music fades, the clowns seem to settle down, returning to their seats.

Every time we think peace has been restored, the music starts up again, and the clowns will begin their furious chase again, like a clown version of Bjork’s ‘it’s oh so quiet.’ This was perhaps the funniest part of the performance. The loaded silences before the music swelled up again had the audience anticipating the chaos that was about to occur.

Towards the end of this sketch, the clowns almost seemed resigned to this. They would deflate when hearing the music, sighing and rolling their eyes, before reluctantly springing into action to repeat their routine once more.

The chase comes to a dramatic conclusion as the clowns finally catch each other. Having reached a conclusion, the energy on stage dissipates as they collapse one by one.

From here onwards, things play out much the same way; energy builds up on stage, reaches a climax, and comes crashing down until the next act. Incorporating balloons, horns, chairs, and the clowns themselves, these routines all draw on traditional circus-like slapstick comedy.

This is particularly effective given the way the production uses energy. Deliberately manufactured moments mean audience engagement is constantly fluctuating. Moments of high action and chaos have our full attention, whilst the long pauses where the clowns wander about the stage aimlessly or lie on the floor less so.

Out of Order is a fitting name for the performance, as there is no specific narrative or chronology to the actions of the clowns. After one routine finishes, the clowns appear at a loss as to what they are supposed to do next. One clown then begins doing something or walking in a certain direction, at which point, the others slowly join in. Once all the clowns are doing the activity, the tension builds and erupts into chaos once more.

The choreography and stage design in Out of Order is phenomenal. The whole stage is used throughout the performance, making moments when the clowns are concentrated in the middle or huddled together in a corner stand out. The chases and fights that persist throughout the performance are brilliantly executed; everything feels organic and natural. The sequences are complex and chaotic, and learning them must not have been easy, yet the performers make it look almost effortless.

With a constant background of music that is ‘out of place’, clowns that struggle with comedy, and themes unfamiliar to a theatre setting, Out of Order is a cleverly designed performance about the relationship between chaos and control.

Out of Order continues its European tour until the end of this month.