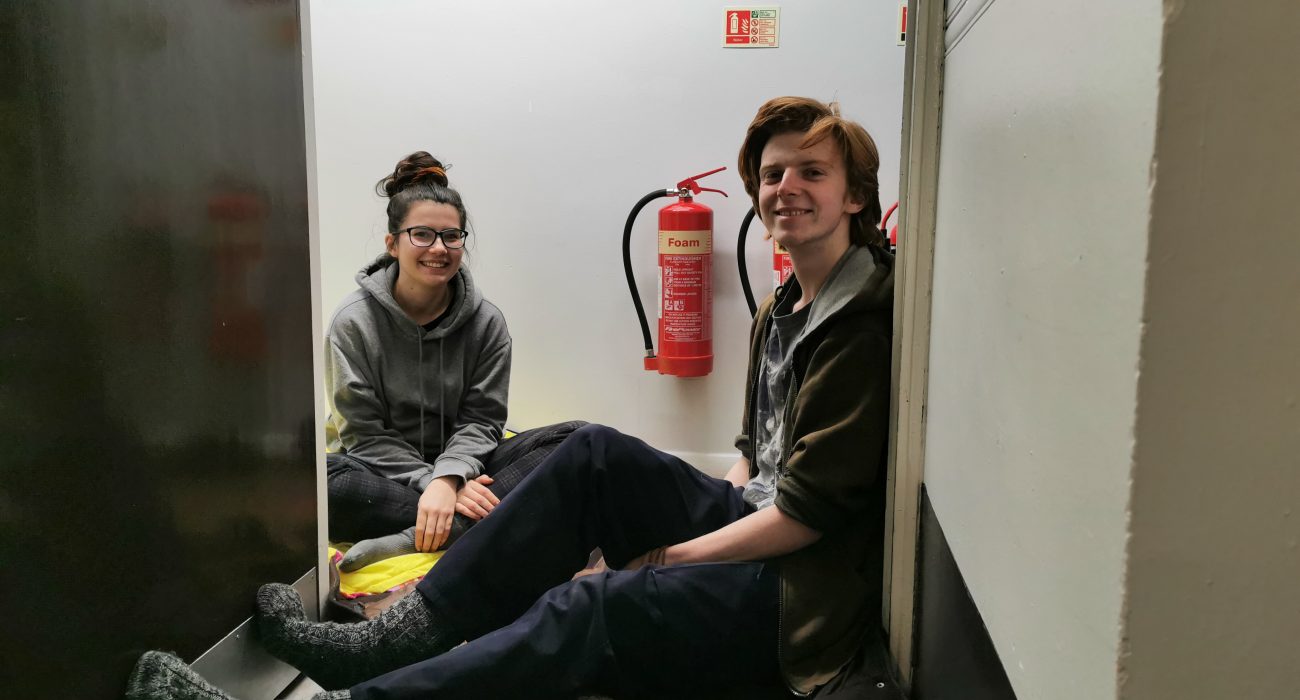 SU Welfare and Community Officer Adam Haigh and a student protestor in the corridor of the John Owens Building. Photo: The Mancunion

A group of student activists is on their third consecutive day of occupying the University of Manchester finance boardroom and are currently being denied access to food supplies.

The group is currently split between the boardroom and the corridor, with those in the corridor unable to access a toilet.

SU Welfare Officer -Adam Haigh and a student left the boardroom to collect food for the group last night but were then blocked from re-entering. They are currently occupying a nearby corridor in the John Owens Building.

A student who is involved in the protest told The Mancunion that “some of us are in a separate part of the building, unable to get back to the main group, and those people are being denied toilets also. Security presence has been really high, there were 7 of them just outside our main area last night, 9 in total (almost half of the 20 on uni campus).”

We’re now 48 hours in! We’ve been split into two groups, one still in the boardroom and another in a corridor without access to toilets. @OfficialUoM still not allowing food to be passed into the building. #fossilfree #EnoughIsEnough #timeisup #wearethechange #divestnow pic.twitter.com/eMfDVYhqQF

The students are members of People and Planet, a UK-wide student network which campaigns for ‘social and environmental justice’. The group, which includes 14 students and two SU Exec Officers, are demanding that the University divest from fossil fuel investment, which is currently estimated at £11.9 million.

The University has instructed security at the John Owens Building to deny entry to any further students, only allowing access to people in possession of a staff card, on the condition that they do not bring food to the protestors.

Some staff of the University have nonetheless attempted to bring food to the student activists, but were denied access and allegedly given a warning that their names could be taken down and reported.

Speaking to The Mancunion, a student representative of People and Planet said that the group are ‘still in good spirits but the uni is openly trying to restrict our resources. We aren’t being allowed food, and any staff that tries to bring us any gets their name (or if unavailable a description of them) sent to their higher up.”

People and Planet UoM also tweeted a photo on Wednesday of an electrician who they claim was sent to the building to cut off power to plug sockets in the boardroom.

BREAKING: @OfficialUoM HAVE JUST SENT SOMEONE TO COME AND CUT OUR POWER SUPPPLY. pic.twitter.com/PctaFHY0Ft

The SU Welfare and Community Officer, Adam Haigh, who is taking part in the occupation said that the University offered to meet with a student representative on the condition that all protestors leave the John Owens building. He explained that the activists plan to continue occupying the finance building for the time being as they felt talks with the University had been going on for quite some time with little effect.

A student representative confirmed this position: “As for demands, we all got letters from Patrick Hackett saying not much that we didn’t already know but that they would only engage with us with our demands through official channels. We have made it clear that we have tried to go through official channels for 8 years and it has come to this, we also would prefer not to be in this situation.”

The letter sent to students involved by the University of Manchester Registrar, Secretary and COO, Patrick Hackett, confirmed that the University recognises “the unprecedented challenges facing our planet and have publicly confirmed this by supporting the the Government’s declaration of a climate emergency. Locally we have signed up to Manchester’s plans to help the city become zero carbon and plastic free.”