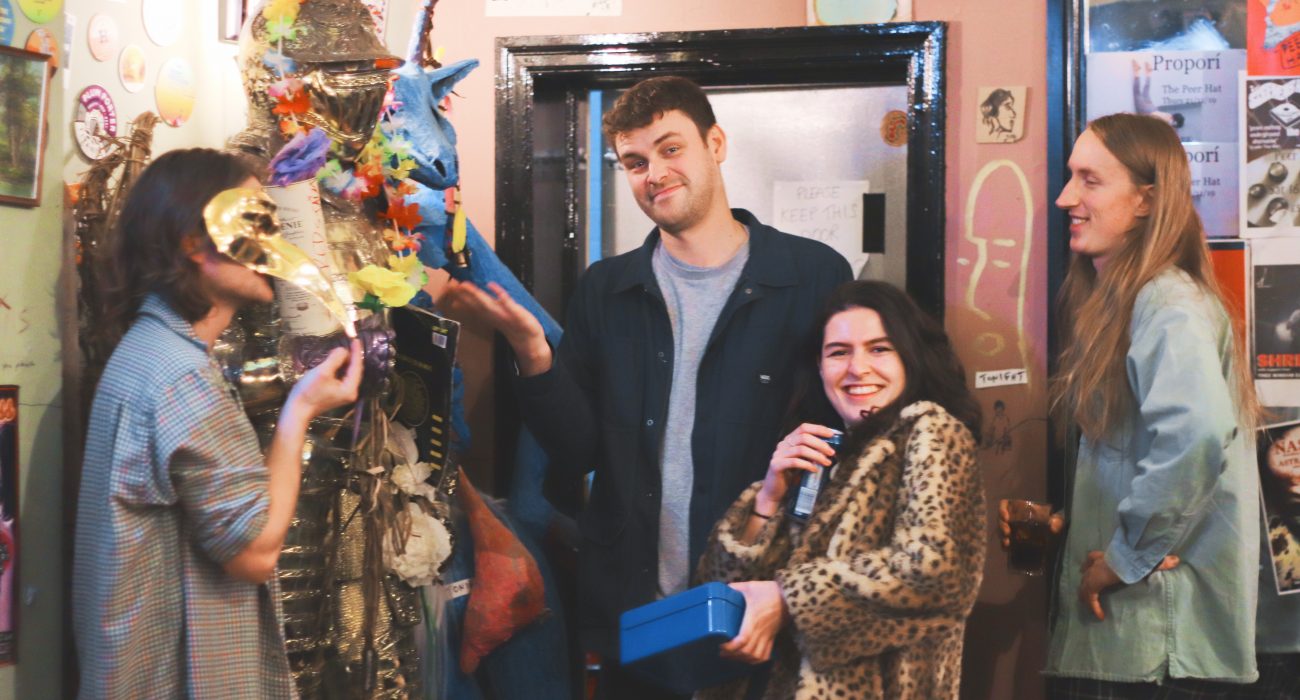 Energetic psych-punk band Hamer released their self-titled LP on the 25th of October this year, a milestone they celebrated on Sunday night at The Peer Hat in Manchester with supports from Cassette Apes and Slap Rash.

The night was both a celebration of the band’s achievements so far and a statement on Manchester’s current punk scene, highlighting what life is really like for emerging artists.

Before the night of varied musical talents got underway, I sat down with both Hamer and Slap Rash to talk about their experiences as bands in Manchester, the punk scene and Hamer’s inspirations behind the LP that features stand out tracks such as ‘You Know’ and ‘No one’.

Manchester punk duo Slap Rash really epitomise what being punk can mean as a band. Amelia and Huw Lloyd, who hail from Somerset, came to Manchester to find their own sound and break into the scene. Originally the duo formed part of a funk band, whose subtle influences can sometimes be heard in Huw’s basslines when he’s not melting your face off.

Whilst sitting down with Huw and Amelia we spoke about their original singles ‘Zone A’ and ‘The Grind’ which were produced by the band October Drift. The punk duo were very happy with their first releases, but also expressed their desire to be “more hands on” with their next project which they hope to be a full EP.

Both members were keen to point out how the Manchester scene was “very supportive”, how everyone around them was very helpful and that they had an “easy time” to initially break in compared to what they were expecting when they left Somerset.

It is unfortunately imperative for new punk bands to come to the city in the way that Slap Rash have, the band commenting on “how dead the scene is back home” and now how “networking is a lot easier in Manchester”. Whilst this may mean there is always going to be a punk band playing in Manchester for us to enjoy it also creates barriers for the poorest bands to really practice their craft.

Although Slap Rash and their experience can tell us a lot about Manchester from the point of a new punk band it is hard to view them as such, with dreams of supporting Idles and Amyl and Sniffers that they seem destined to reach. These punks are full of all the eagerness in the world both off and on stage, a demeanour that is both uplifting and enticing to watch.

Their only complaint about the city they love so much is that established bands “always get booked first” and you need “a little luck to get recognised”.

They describe their band’s sound as very spontaneous, since “being a two piece makes it more raw” and that their best tracks always come from not overthinking writing. The stand-out feature of the band does have to be Amelia’s vocals and her control of the microphone as a front-woman behind the drum kit, coupled with Huw’s ability on the bass.

The headliners of the night Hamer are the perfect blend of energetic, humorous and mischievous. Current band members Hamish Watts, Thomas Shuff and “Jim” James Tkaczyk-Harrison seemed delighted with the “great reception” their self-titled LP has received and the amount of orders they received at resale.

Newest band member, Jim, joked that the LP is a “9.9/10” and could only get better if he were on it, alluding to the recent high bandmate turnover — yet another difficulty navigating a punk band through the late 2010s.

Hamer as a band are unapologetically individual, praising the Peer Hat as a venue for being “grassroots” and having such a “DIY” theme. The band were bold enough to state that they wouldn’t want to play Manchester Academy if offered the opportunity, something other punk bands are chomping at the bit for. Yet it isn’t renowned venues like Academy fuelling Manchester’s punk scene, its “Musician pubs” like the Peer Hat.

Hamer’s comments on other bands in the scene were that there were many more “post-punk” bands than there was traditional punk, and that it was often hard for Hamer to finds supports able to match their energy. By the end of the evening, however, it appeared that Slap Rash had convinced them otherwise.

Punk as a genre is always evolving, as are bands like Hamer with the recent addition of bassist Jim adding more Primus style bass to their sound. Overall Hamer are aiming for a slightly more psychedelic sound for their next project which they hope to send to “record shops in America then the moon.” As well as a European tour the band are sitting on three tracks that they really feel could be something special.

As well as the moon, Hamer said that they are aiming for a Christmas number one. They also note that their favourite thing about the Peer Hat is that the building is “tall”. This humour shines through during crowd interactions during their set especially from frontman Hamish, in a way that shows them as a band playing serious music that doesn’t take themselves too seriously.

The gig itself was easily enjoyable, the highlight of which being Amelia of Slap Rash breaking the kick drum pedal mid song during a set that simply stole the night. Hamer performed their new album with fervor, again with technically excellent drums. The LP itself felt repetitive in places yet did not feel so at all live, with the headliners still putting on a show to be remembered.

Both Hamer and Slap Rash are living proof that whilst Manchester’s punk scene may not be thriving as much as it once was, it is certainly alive and kicking. It is certainly worth checking both bands out with Slap Rash playing at a punk Christmas special at band on the wall on the 20th of November and Hamer playing on the 23rd in a show they promise will be “radge”.