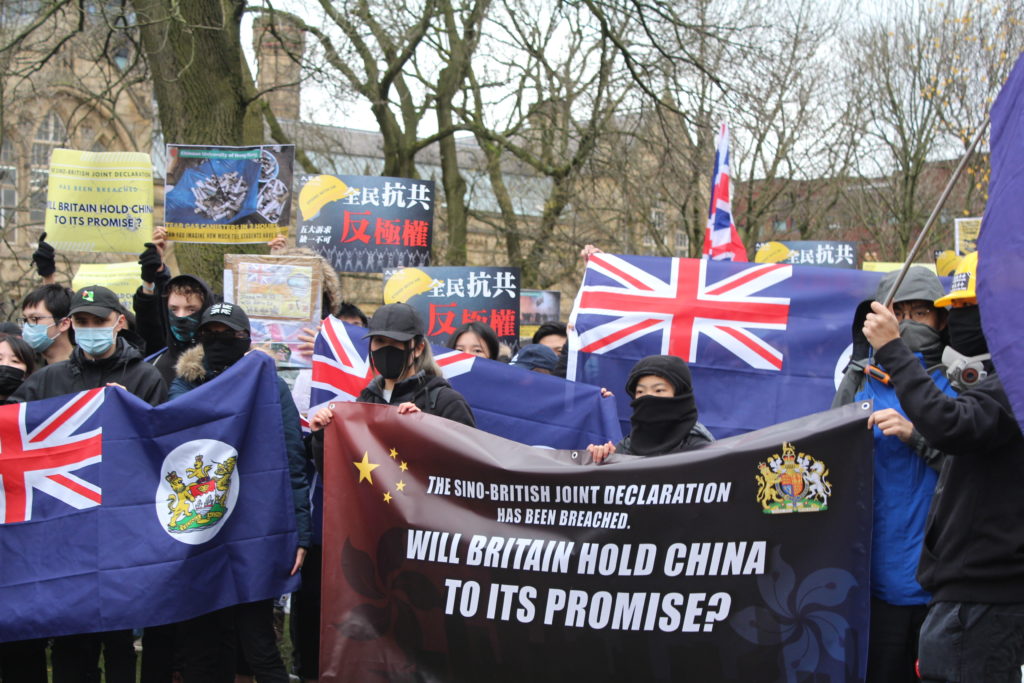 Around 200 protesters marched in Manchester this weekend in support of pro-democracy movements in Hong Kong.

The predominantly peaceful demonstrators, many of whom were masked, met in All Saints park near Manchester Metropolitan University to stand in solidarity with pro-democracy protests in Hong Kong, which have been continuing with increasing violence since June 2019.

The group headed north from All Saints to Deansgate and St Peters before moving into China Town where their calls for others to “Stand with Hong Kong” and “Fight for Freedom” were met with opposition from the largely pro-government community.

It is not the first time the two sides have clashed in Manchester. A pro-democracy protest early in October received opposition from patriotic Chinese students resulting in the two groups being separated by police in the city centre.

Protests in Hong Kong began in June in response to the proposed changes to extradition policy which would allow Hong Kong citizens to be tried in Chinese courts.

Protesters feel this move would threaten the autonomy of Hong Kong and violate the One Country Two Systems precedent which has been in place since 1997 and is expected to remain in place until 2047. This arrangement provides the region with a degree of independence from mainland China and also guarantees more rights for its citizens.

While the bill to change extradition policy was withdrawn in September, protests have continued with increasing violence between activists and Hong Kong police.

Many demonstrators who protested this weekend were critical of the British government’s failure to support pro-democracy movements in Hong Kong and called for greater action from the government.

In a statement written by a group of Hong Kong Mancunians, the group claimed: “As one of the signatories (of the Sino-British joint declaration), the United Kingdom has an indispensable role in the maintenance of the integrity of the ‘One-Country, Two Systems’ principle and the promise to an unchanged way of life in Hong Kong for 50 years.

“With the PRCʼs blatant breach of the Sino-British Joint Declaration, we most sincerely hope that the UK government can take a “much firmer line” against China and condemn the PRC for disrespecting its commitment and promise towards the maintenance of Hong Kongʼs autonomy”.

In response to calls for greater UK involvement, the UK Foreign Office told The Mancunion: “We remain seriously concerned at the situation in Hong Kong and recent violent clashes between protesters and the police”.

The British government has stressed it’s “support for Hong Kong’s high degree of autonomy as provided for in the joint declaration and our commitment to the principle of ‘one country, two systems’”, but have condemned violent action on all sides.

Earlier attempts by the British foreign secretary have not been well received by the Chinese Government.

Raab’s attempts to establish contact with Hong Kong’s leader in August 2019 were quickly condemned by the Chinese government.

Hua Chunying, a spokesperson for the Chinese foreign ministry reminded British ministers that the days when Britain ruled Hong Kong were “long gone” and claimed the British government has no juridical right to intervene in political affairs in the Chinese region.