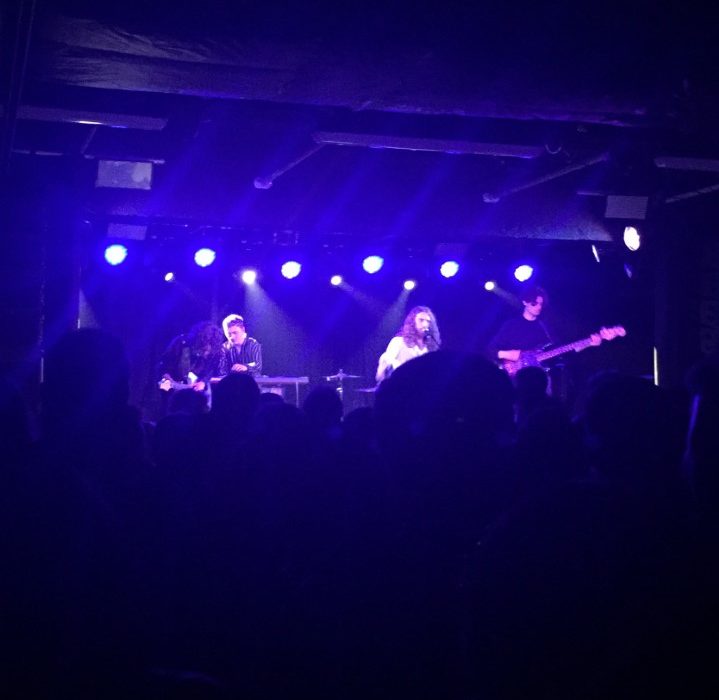 Whilst it feels like the Stockport-bred quintet sometimes get lost within the new-wave indie music being produced at the moment, this sold-out show demonstrated that they have gravitas that cannot be ignored.

Opening band Monks were a distinctive and sultry combination of catchy melodies, synth-led tracks and groovy bass. However, the looming disappointment of the evening was second support, Full Colour. Although the five-piece began to settle as their set progressed, at times I was confused about what exactly they were trying to achieve. Despite some obvious potential in the songwriting, vocals onstage struggled and they didn’t take to the crowd as well as anyone could have hoped. This culminated in a staggering lack of enthusiasm onstage, conveying itself as arrogance.

Proving that their character lies in their latest songwriting, Fuzzy Sun dragged the crowd back into the smooth richness of funk with their recent track ‘Gentleman’s Touch’.  Supported by trumpet-player Robbie Richardson, this multi-layered release is an impressive reflection of how new-wave indie is shifting back to the groove of the 70s and 80s.

The absence of keys-player Daisy failed to subtract from an excellent headline performance which engaged the crowd wholeheartedly. This was undoubtedly due to the hard work of the other members in maintaining their distinct sound through a carefully curated combination of guitar solos and driving synth melodies.

The set combined an eclectic combination of tracks, demonstrating Fuzzy Sun’s potential to push the boundaries of the genre into something both unique and staggering. ‘Eve’ successfully caught the emotion of the crowd, who were lively and engaged throughout the whole set.

When watching them live, however, you can’t help but think of their Stockport counterparts, Blossoms — the poster-boys of the North’s contemporary music scene and the jangly, synth-led indie rock that they have popularised. At times, the strong synth melodies felt a bit too much like something Blossoms would be writing and releasing, and lacked an individuality and identity of their own.

In Fuzzy Sun we could realistically be seeing the redefining of the indie-rock genre. The enthusiasm of the crowd and their engagement with the music being produced onstage was staggering. The audience was predominantly young, and at times rowdy, which was disheartening but as soon as the headliners took to the stage they seemed united by a love of the music which was reflected in the musicians onstage.

Fuzzy Sun revelled in their music and the crowd which was the essential segment of the performance ensuring an impressive stage presence that would rival even the biggest, most experienced performers. Their new single is a catchy and well-written summery anthem which is defined by both jangly melodies and rhythm-driven vocals. The backing vocals by drummer Mitch are well poised within the track to demonstrate the excellent writing behind it.

Overall, this was a gig that was difficult not to dance to. The crowd at times let the atmosphere down through their rowdiness, especially at the start of the gig, however this was a performance that reflected the potential Fuzzy Sun offer. Their infectious combination of lulling vocals and well-strung melodies are indicative of the movement the indie scene is making towards the iconic songwriting of the 70s and 80s and are a credit to the progression they have become a part of.