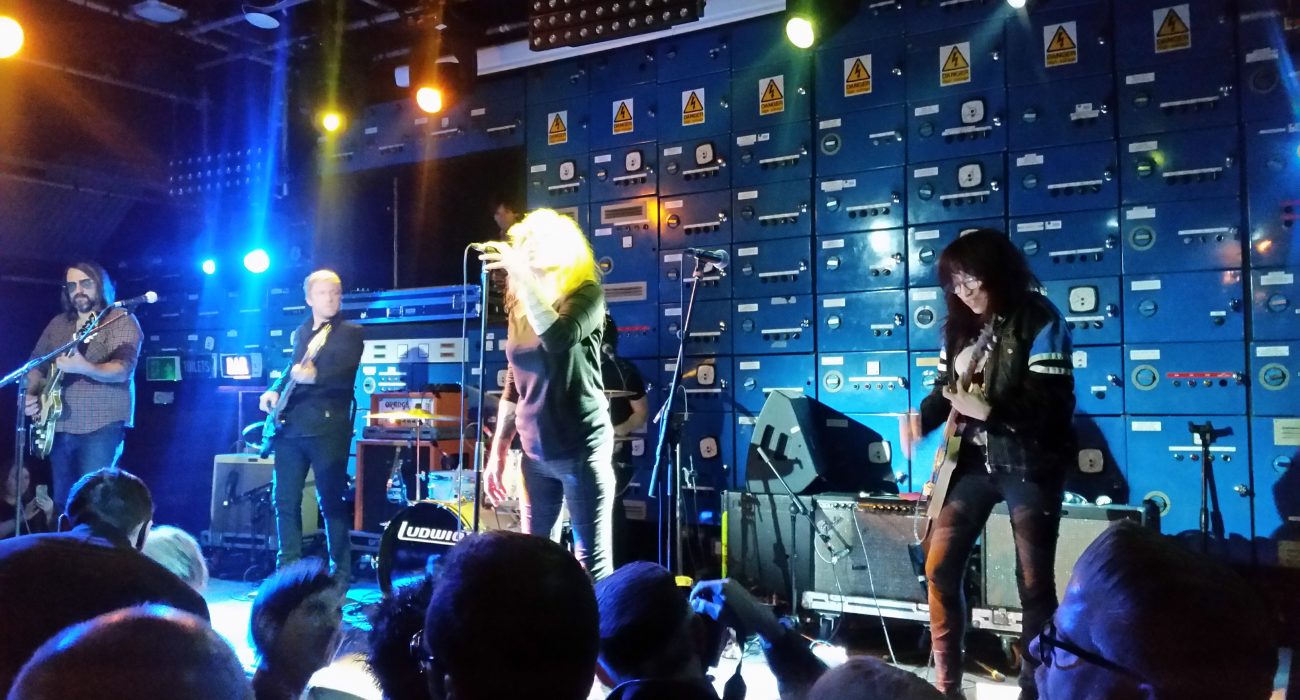 Marking the final date of their first UK tour in 15 years, what had the potential to be a fantastic gig was marred by lead singer Rachel Nagy’s destructive performance.

As support band, The Peawees, took to the stage, and blitzed through a selection their three-minute, punk-soaked rock and roll songs, every toe was tapping. To say our presence lowered the average age considerably would be an understatement; to say the crowd lacked enthusiasm and energy, however, would be totally unjust. It wasn’t long before a dance floor emerged in the centre of the crowd, arms flailing and hips shaking; it was clear everyone present was revelling in the moment. The Peawees’ slick set oozed class and professionalism, providing sharp contrast with what was soon to follow.

After the support left the stage there was an obvious excitement building as tracks by The Sonics, and other rock and roll classics, blared through the PA system encouraging a mass singalong. Met by rapturous applause, at just after 9:30, the band appeared on stage, first the rhythm section, closely followed by core members, Nagy, and guitarist Mary Ramirez (the only ever-presence in a constantly changing lineup). After a short, slurred introduction from a rather inebriated Nagy, they opened with “sad and angry” ‘I Can’t Go Back’. The single released on Jack White’s Third Man Records last year provided the perfect opportunity for the front-woman to showcase her aggressive yet soulful vocal style. Whatever clarity lost in her speech, was more than made up for with her singing.

After a slow start, the crowd were eager to dance again and fan favourites ‘Putty (In Your Hands)’, ‘Cha Cha Twist’ and ‘Midnite Blues’ from their 1998 debut Mink, Rat or Rabbit were on the money. The crowd were moving once again and balance had been restored. Nagy and Ramirez’ chemistry was undeniable and was a sheer joy to watch. The Cobras excelled most when they let their music do the talking.

Regrettably, this chemistry could not be extended to the rest of the band. On several occasions between songs Nagy could be heard instructing the sound technician to turn the bassist down, much to the bassist’s dismay. After more ill-received attempts at audience interaction, it was apparent that the band’s patience for Nagy was wearing thin; this perhaps goes some way in explaining their revolving door policy for members. Friction mounting on stage was inducing a tense atmosphere around the venue and there was an imminent feeling that something would go awry.

What happened next was borderline farcical. After what appeared to be a discussion over which song was next, the band proceeded to play the opening bars of ‘What More’, seemingly without their singer’s approval. Nagy refused to cooperate, missing her cue, prompting confused responses from the band and audience alike – was she really not going to sing? Although she eventually caved, reluctantly joining in to finish the song, the mood from this point onward completely shifted.

A few songs later they closed their main set with ‘I Wanna Holler (But The Town’s Too Small)’ and left one by one to a fairly underwhelming response from the audience. Minutes later they returned, once again to a muted response (barely comparable to that when they initially entered) to play a two-song encore. The first, a highly emotional cover of ‘Cry On’ (originally by Irma Thomas), a ballad that highlighted a more personal side to Nagy and, against all odds, proved to be a high point in the set.

Despite her earlier behaviour, it appeared that the enigmatic singer had won over the crowd once again, and the band had one more surprise to come. This was with the final song, a tour debut for another fan-favourite, ‘Hey Sa-Lo-Ney’ from their second record Life, Love And Leaving. A fine way to end an evening of highs and lows.

It must not be understated how brilliant the band sounded through the vast majority of the gig, save the sometimes erratic vocals, you could have been listening to a studio recording. Sadly, the performance was overshadowed by Nagy’s inconsistencies.