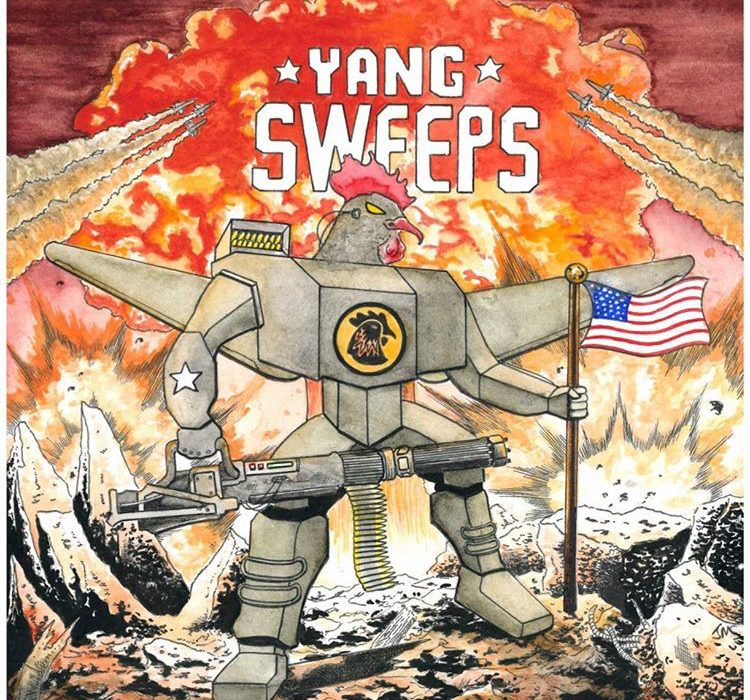 The first time I met Yang Sweeps was after a gig at Jimmy’s. Eccentric and unpredicatable – I thought they were perfect for Art in Mancunia.

Last years performance for Art in Mancunia rigorously tested the infrastructure of Antwerp as choppy waves of heads banged and mosh pits emerged inside the crumbling walls of the Mansion. It is safe to say that as the final act, Yang Sweeps blessed us with an outstanding performance and now 2020 anticipates round two.

However, the newly reformed “quintet rock outfit”, as a result of a new face who dared to join the intriguing “cesspool” that is Yang Sweeps, can only mean one thing – something new and more daring…

Despite the various bumps and turns that the 2019 road threw at Yang Sweeps, the successes of their 2019 EP ‘Dad Rock’ demonstrates the quality of their music. The band are ranked 24 out of 30 by MIMR Alternative Indie Music Blog and their achievements do not halt here.

Yang Sweeps have performed more gigs in the past four months than in their first year voyage into the indie ocean, keeping their sails afloat with the recent release of a brand new EP, CHICKEN RUN SEQUEL CONFIRMED (C.S.R.C.) which dropped on the 1st January this year.

The EP begins with ‘Mustard Tears’, in which I cannot help but visualise Sonic The Hedgehog cloud-hopping and rolling in slow motion through space, eventually obliterating into a thousand megapixels. Piercing through the multicolored haze, an unforgiving guitar rift pulls the listener down to where the story begins, a breezy sunflower meadow with the wind blowing in their hair.

The seamlessly chaotic enchantment of this EP oozes out from all angles. Moreover, the EP cover design by @judemstedward_art enhances the artistic dynamism of Yang Sweeps, and has much to be credited for. Whilst the design suggests a political critique of state control, ready yourself to find each of the four tracks as entities in themselves, independent from some themes communicated in Stedward’s design.

Serious reflection on and reworking of the Yang Sweeps sound is what has been most apparent from this EP, but mostly the band’s attitude. 2019 saw the transition from a more colourful melody that teased with optimistic chords, to the C.R.S.C EP which demonstrates a creative contrast between light and dark. C.R.S.C is a compilation that intimates with unexpected digital frequencies, harrowing guitar solos, and tenacious drums.

You can follow Yang Sweeps before the exhibition on Instagram, @_yangsweeps_, and catch them playing at local gig venues and bars across Manchester.