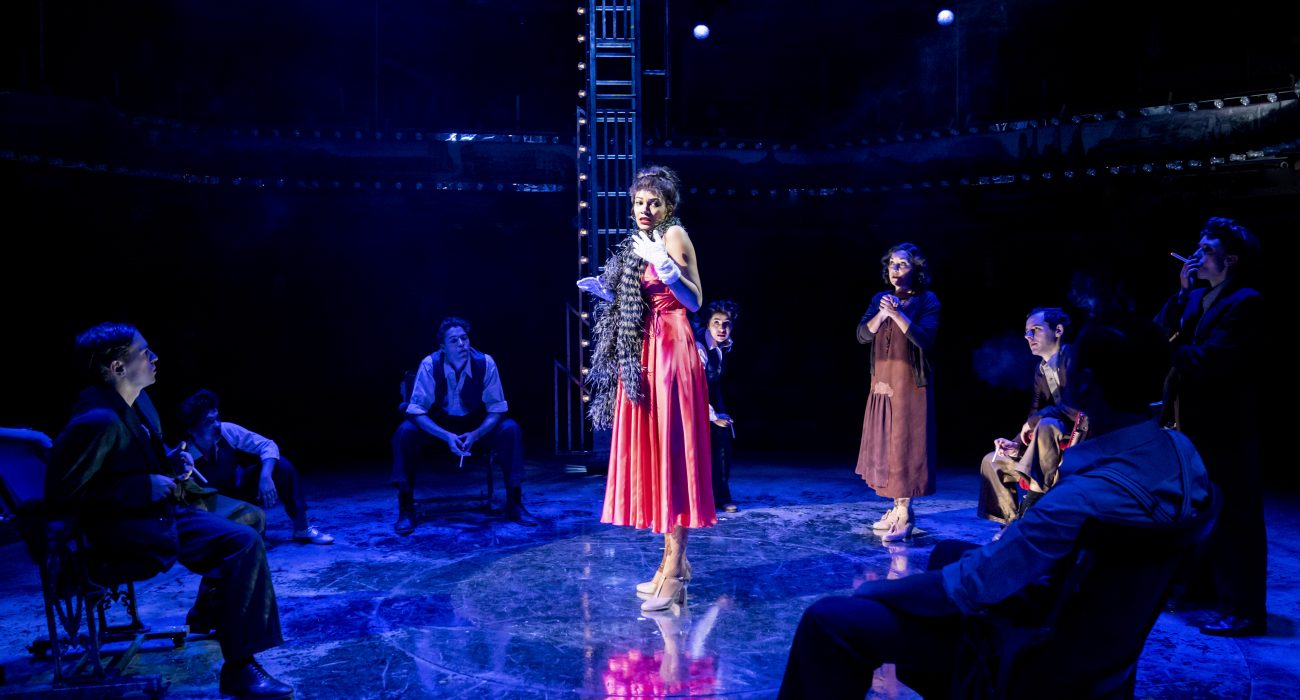 While in New York about 10 years ago, I was at the South Street Seaport ticket booth perusing the bills to get some last-minute tickets to a Broadway show. The usual suspects passed under my eyes, Phantom of the Opera, Chicago, The Lion King, etc., when a thickset Brooklyn man spoke from behind me. “No!”, he ordered, like a judge’s voice cutting through the courtroom: “You gotta see Gypsy!”. Wow, I thought; recommended by a New Yorker, it must be good.

It was, and so of course I immediately jumped at the opportunity to see Gypsy again, 10 years later, here in Manchester and at the Royal Exchange Theatre.

Mama Rose was played by West End veteran Ria Jones, whilst Broadway legend Patti Lupone played her when I last saw her. Jones famously understudied Glenn Close in the role of Norma Desmond in Sunset Boulevard in the West End, so it was inevitable she would be Mama Rose one day.

At once, the show pops like an uncorked bottle of bubbly, welcoming in a celebration. In this case, as we’re seated in-the-round, we’re enveloped in a celebration of the Broadway musical. Under the thrifty regime of Mama Rose, we see the young cast grow into the adult cast, during repeated and up-cycled versions of the musical number Let Me Entertain You. Exploding onto the stage from all angles, the ensemble-work is slick and the young cast, in particular, with their vim and versatility completely immerse us in a Broadway nostalgia trip.

Rose is a show business mama of two, June and Louise, three times divorcee who never wants to marry again and is tormented by a lifelong ambition to be a Broadway star. Instead, she lives vicariously through her children: ‘I would have been something’, she says ‘if only…’, if only she’d had a mother who pushed her.

Gypsy is a musical continually renewed under the light of contemporary reinterpretation; many of the issues dealt with are still relevant in the entertainment business today. When Rose meets Herbie, a retired agent, I cringed as they sang the number “Small World”, where Herbie uses his position of power to persuade Rose into marriage. “Small world, isn’t it?”, they sing. Rose wants to see her daughters’ names in lights, and Herbie has connections on the Broadway circuit. How convenient, but how can we not see this differently, post-Weinstein? Rose is not innocent either, collaring five boys into joining her entourage, saying “the experience will be their payment”.

June, the golden child, eventually buckles under her mother’s pressure and skips town. Until this moment, Rose’s vulnerability is veiled with Broadway pizzaz. It’s in the subtlety of Jones’ performance that we see she is still a child and that her dreams lay scattered at her feet.

This scene was a particular highlight. By the end of this scene, whether we like it or not, Louise, the prior-to “no-talent” black sheep of the family, has become the focus of her mother’s obsession. The set was an empty train station, Herbie and Louise sitting on their luggage. In this desolate space, I saw every ounce of horror on Herbie and Louise’s face, and every ounce of madness on Rose’s. These harrowing moments when we look behind the curtain are vital.

The second stand-out moment happens when the entourage end up at a burlesque house, since no-one will take their act. In their desperation to find work, Rose volunteers Louise to stand-in for a burlesque performer last minute. Alone in the dressing room, Rose prepares Louise to go out on stage. Piece by piece, she dresses her daughter, and with each addition, the satin white gloves for example, there’s a moment of regret in her eyes. There’s no music during this, just the tender, uncertainty of a mother selling-out. “Are you sure, Mama?” asks Louise, to which Rose indirectly replies: “You only need to drop a shoulder strap”. What thrift. Melissa James says few words in this scene, but her expressions say everything. Questions hang over the scene, but Rose never asks her daughter: ‘Do you want to do this?’

I was worried how Louise was ever going to become the glamorous Gypsy Rose Lee. It’s testament to Melissa’s performance that when she dons the satin, baby-pink and mink, there’s a polar transformation. With Melissa James, it’s easy to see how Gypsy became one of the highest grossing burlesque performers. Once she’d found her calling, the confidence followed.

The show is optimistic in its conclusion, which hit all the right notes for the liberating theme of this rendition. Louise no longer resembles her former self and has even been stripped of her name. Previous renditions played on this theme of exploitation, but this rendition has other ideas. Louise, now Gypsy Rose Lee, has ultimately found her passion and embraces the life that comes with it. This is about a woman getting out from under her mother. By the end, they have reconciled their differences and walk off stage, Rose wearing her daughter’s fur shawl. ‘It looks better on me’, she says.

If I saw that Brooklyn man again now, I would turn and say “Take it from me”, pushing the Royal Exchange bill into his chest: “See Ria Jones!”.