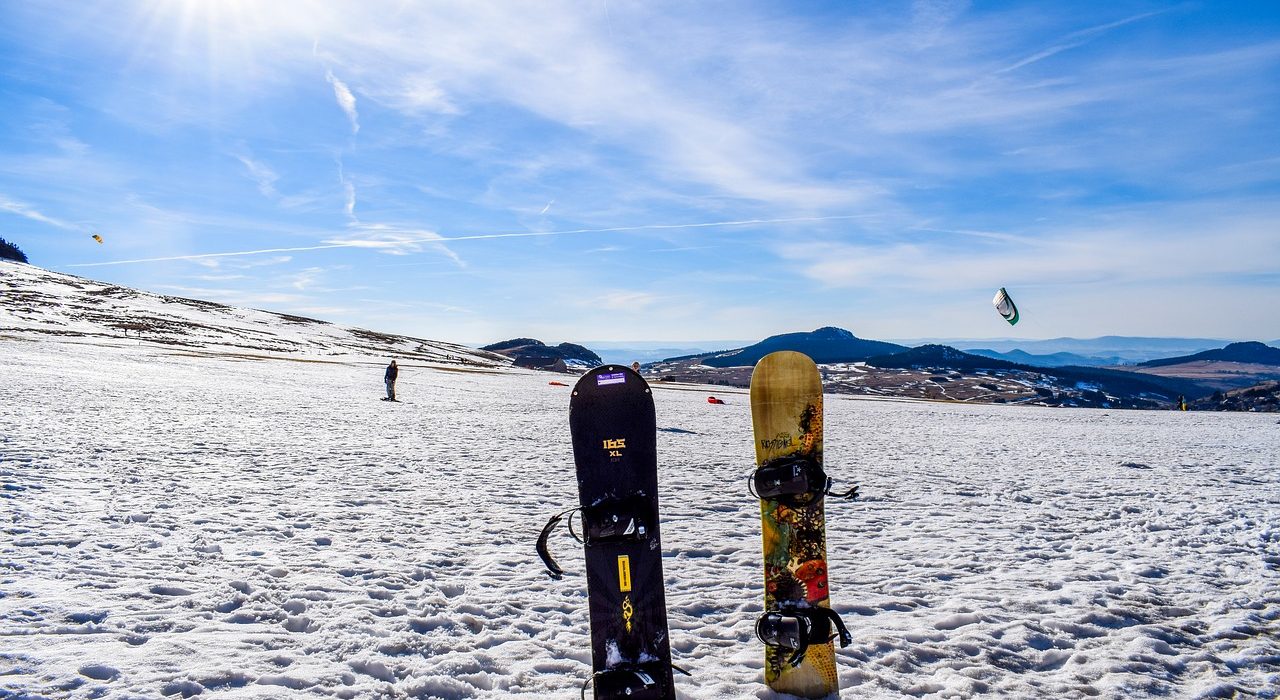 The University of Manchester Ski and Snowboard Club (SKUM) has admitted “unacceptable activity”and vowed to change after an investigation by The Mancunion exposed, among other things, that committee members had encouraged “preying on freshers” and discussed sexually assaulting a prominent British skier in a group chat.

In a statement released earlier this week, the club insisted it would continue to tackle “damaging attitudes and behaviours” and become more “socially responsible”. 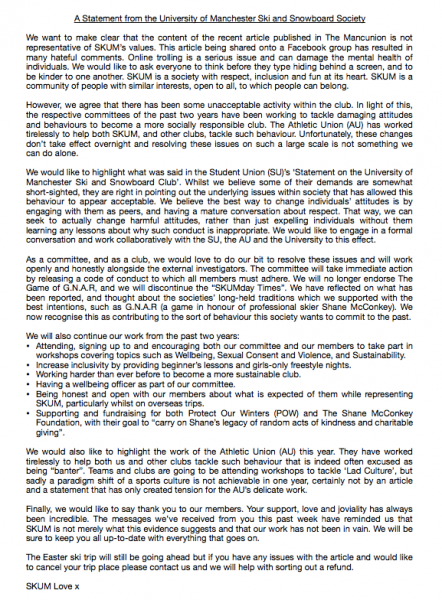 In a statement published Tuesday on its Facebook page, the club said they would also no longer endorse the controversial “game of GNAR” – a game played by some members of the club on bi-annual ski trips which consisted of a series of challenges completed in order to gain so-called ‘GNAR points’. Some challenges described in the rules included: “Complete line [a run] butt naked. If jailed, you lose your points” for 10,000 points and “On a line, black [run] or harder, stop mid-line and urinate. Must empty bladder,” for 200 points.

SKUM have also made the decision to discontinue production and distribution of the “SKUMday Times” – a newsletter sent out on trips, detailing self-styled “shenanigans and debauchery” of club members.

In the statement, the club committed to “encouraging both our committee and our members to take part in workshops covering topics such as wellbeing, sexual consent and violence, and sustainability.”

SKUM, one of the largest and most prominent clubs at the University, said The Mancunion’s article being shared on Facebook had resulted in “many hateful comments”. The club condemned online trolling as “a serious issue [which] can damage the mental health of individuals.”

“We want to make clear that the content of the recent article published in The Mancunion is not representative of SKUM’s values.

“We would like to ask everyone to think before they type hiding behind a screen, and to be kinder to one another. SKUM is a society with respect, inclusion, and fun at its heart. SKUM is a community of people with similar interests, open to all, to which people can belong.”

The University of Manchester said it would launch an investigation into the “troubling” and “totally unacceptable” revelations. It is understood that Director of Student Experience, Simon Merrywest, will be leading the University’s response.

Among other things, the SU called on the Athletics Union (AU) to suspend the current SKUM committee and asked that they ensure any new committee members receive “consent training”. 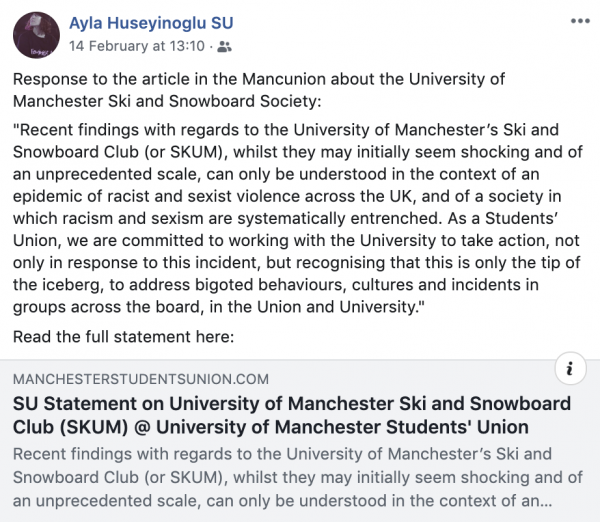 The Executive Team discussed the behaviour of the club within the context of a wider culture within society: “To know that we live in a racist and sexist world is one thing, to confront it is another. And we must confront it, each and every one of us, but we cannot do it alone. This story isn’t just about one University society, it is the reality of the world we live in.”

In response to the SU statement, SKUM said: “Whilst we believe some of [the Executive team’s] demands are somewhat short-sighted, they are right in pointing out the underlying issues within society that has allowed this behaviour to appear acceptable.

“We believe the best way to change individuals’ attitudes is by engaging with them as peers, and having a mature conversation about respect. That way, we can seek to actually change harmful attitudes, rather than just expelling individuals without them learning any lessons about why such conduct is inappropriate.

“We would like to engage in a formal conversation and work collaboratively with the SU, the AU and the University to this effect.”