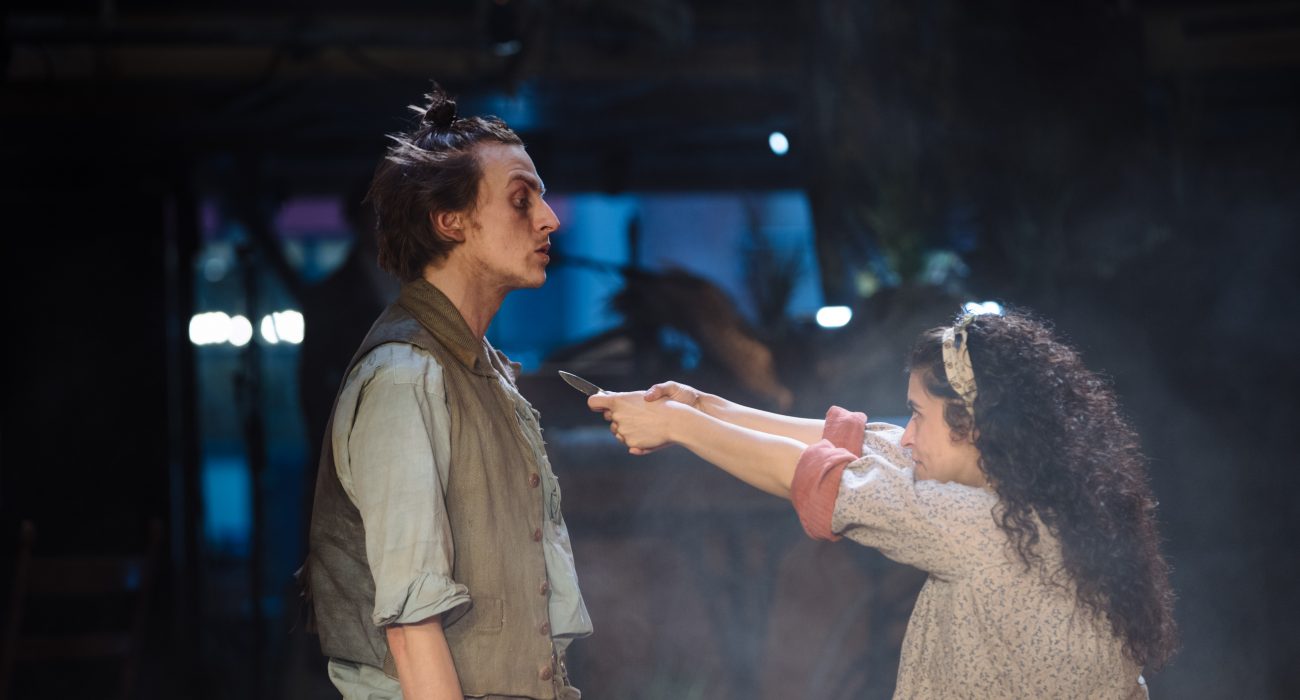 Emily Brontë’s novel Wuthering Heights is a masterpiece that has cemented its place in the English literary canon and has inspired numerous adaptations for both stage and screen. After studying it extensively at school and growing up watching the 1992 film starring Ralph Fiennes and Juliette Binoche, I was excited yet also unsure of what to expect when I bought my tickets for the Royal Exchange’s adaptation of it.

After reading it was a modern adaptation, there was a slight tinge of disappointment that I wouldn’t I didn’t expect to see any period costumes; which I love. I was therefore thrilled to see that costumes of the time were still being used and it was the dialogue that had been modernised.

Adapted by Andrew Sheridan and directed by Bryony Shanahan, this performance without a doubt exceeded all my expectations. Every aspect of the play had been clearly thought through and was executed with precision: from the lighting to the music, with terrific acting by a diverse cast throughout.

Wuthering Heights tells the story of the star-crossed love between the childhood playmates Cathy and Heathcliff. Their love for one another is pure and innocent as children, and their personalities are so suited they appear to be almost kindred spirits.

Entering adulthood, their idyllic relationship and love are threatened by the harsh realities of the real world: with maturity, Cathy decides she is in need of a man that can support her, and to the detriment of both her and Heathcliff, she chooses their rich but weak-minded neighbour, Edgar Linton. Their love never fades despite her marriage and torments them both to the point that she dies of heartbreak and exhaustion after giving birth to her only child.

The cast were fantastic; each actor clearly gave their all and offered their own personal touch to their character. Rakhee Sharma struck me from the beginning as being able to masterfully embody the complexity and multifaceted character of Cathy. The acting during her psychological breakdown had the entire audience in tears. Standing in the middle of the stage and shouting for Heathcliff, the utter anguish and desperation in her face made it impossible for anyone to not feel empathy for her pitiful situation.

Alex Austin was equally striking in the complex role of her star-crossed lover Heathcliff. When Heathcliff is first found by Mr Earnshaw, and is a lost and hungry orphan on the moors, he likens him to a wild animal by salivating to the point that it dripped down to the floor. This makes the contrast with his growth into a reputable young man even more stark, whilst also expressing Heathcliff’s cunning maliciousness in enacting his revenge against Hindley and the Lintons.

Former Coronation Street actor Dean Fagan gave an impressive performance as Edgar Linton. Rather than making him the typical antihero, he appears very human in how his love for Cathy makes him vulnerable. His portrayal of his awkward English politeness serves to highlight his weak-mindedness when on stage beside the headstrong Heathcliff. All three performances perfectly complemented each other in one of the most famous love triangles in literary history.

Lighting designer Zoe Spurr deserves a commendation for the excellent lighting. Long tube-shaped lightbulbs were suspended from the ceiling in the opening scene and were adjusted in height to complement the mood of the scene that was taking place, an effective tool in reflecting the mood of the characters on stage. Heathcliff, in the height of his anguish, is pressed to the floor by the lights, inducing a sense of claustrophobia.

The musicians Sophie Galpin and Becky Wilpie opened the play with eerie vocals and instrumentals (guitar, mixer and electronic percussion), building the atmosphere with sound between scenes in times when emotions ran high and all that was needed was music to speak the emotions that were playing out on stage.

I would highly recommend this play to any lovers of the book, the films or to anyone who knows nothing of the story at all but merely wishes to know more of it and to spend an emotional evening of entertainment at the circular theatre inside the beautiful building of the former Stock Exchange.

Wuthering Heights runs at the Royal Exchange Theatre until the 7th of March.