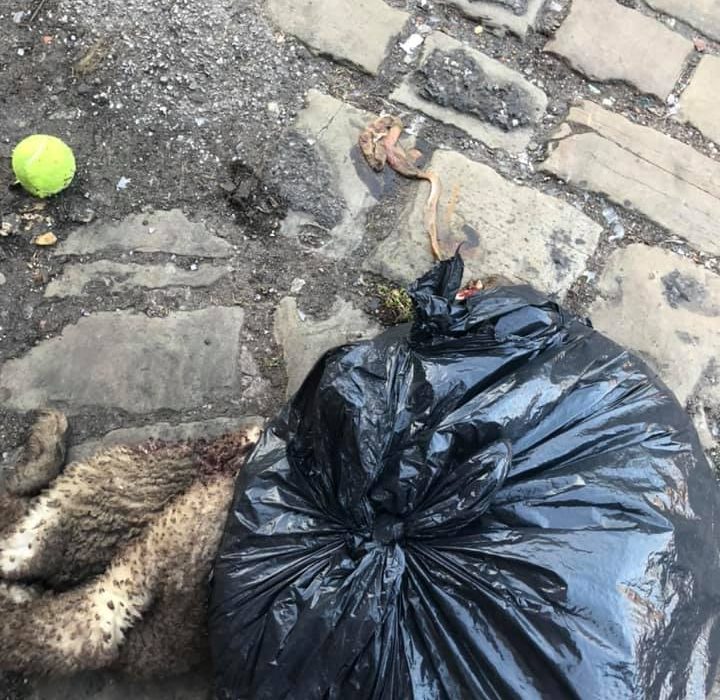 Photo taken from FSG post, used with permission of student

On the 16th of April, a student from Manchester alerted members of the Fallowfield Students Group to an unusually morbid crime.  The student, who wishes to remain anonymous, posted online that she had discovered five bin bags in Fallowfield which she believed to contain the bodies of dead animals.

Fallowfield is, sadly, notorious for crime.  Break-ins are reported almost daily on Facebook’s Fallowfield Student Group, and official figures from the Manchester Evening News (MEN) conclude a record high of 448 burglaries in Withington in 2018 alone.

But while students have become somewhat desensitised to the onslaught of burglary related warnings across their social media, this grisly mystery caught people’s attention.

In one picture, an ear can be seen poking out of one of the bin liners.  Another graphic image depicts what appears to be the woolly fur of a lamb. 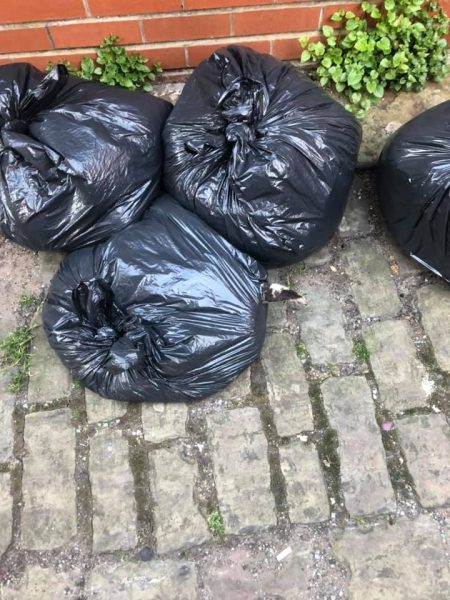 The grisly discovery was reported to the police and the council. Photo: Used with the permission of the original poster on FSG.

Naturally, students reacted with horror to the Easter discovery of – as confirmed by the student who made the post – five dead lambs dumped in bin bags at the heart of the student hub of Fallowfield.

The mystery of how the animals were killed and why their bodies were left in a residential street is as yet unanswered, but sadly, this case isn’t unique.

In 2014, the MEN reported on a morbid story of a council worker who discovered a bin bag containing the severed heads of cats just off Wilmslow Road, not far from Manchester’s famous ‘Curry Mile’. The newspaper revealed that cats are the most common animal to be dumped.

A spokesperson for the Manchester City Council told the MEN at the time addressed the incident: “At this stage we have no way of knowing how these animal parts came to be where they were discovered but we will be contacting the RSPCA as this is clearly an extreme example of animal cruelty.”

What’s more, in 2016 the MEN declared Greater Manchester ‘Britain’s animal dumping capital’, while 9,069 animals had been dumped and left to die in the UK during the previous year,  770 of those offences were in Greater Manchester. 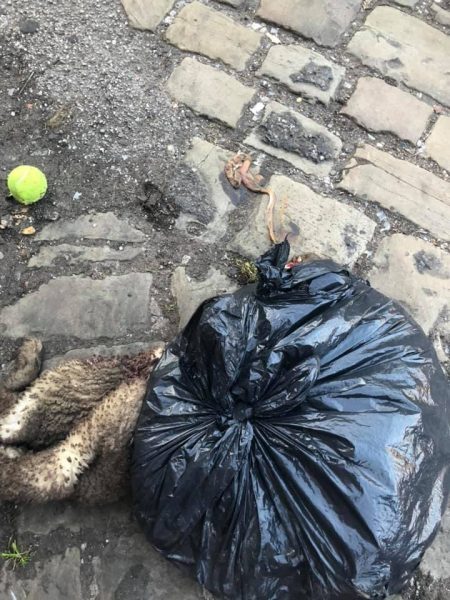 Photo: Taken from FSG post, used with permission of student

Although in this particular case the lambs were likely already dead before they were abandoned in Fallowfield, no one can be sure of exactly what happened to them in their last few moments.

After getting in touch the spokesperson for Manchester Animal Climate Action, formally Manchester Animal Action, they confirmed that the Fallowfield area is “notorious for animals being dumped in this way … namely cats.”  They suggested that “These lambs could have been stolen or they could be from someone illegally keeping the animals.”

It seems Fallowfield has a history of odd stories involving the remains of sheep. On this date one year ago another student of the University of Manchester posted online about her distress at finding a sheep’s heart which had been mysteriously posted through her letterbox on Lombard Grove.

Aoife Sherry, the student in question, posted the photo to her Instagram story with the caption: “Someone has posted an actual heart through our letterbox what the f*ck I hate Fallowfield.”

While initially fearing that the heart was a death threat, it soon emerged that the culprits were in fact friends of the student playing a sick prank. 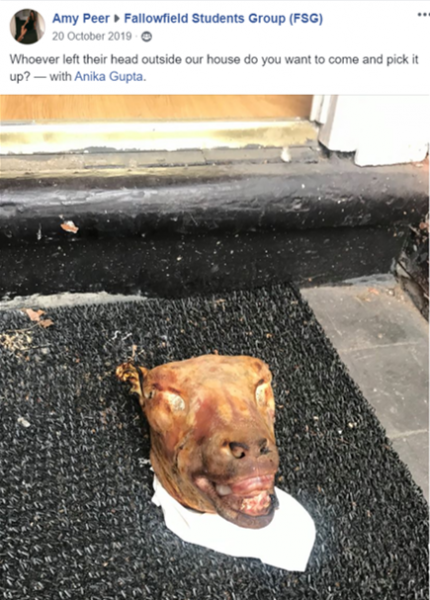 A sheep’s head, left as a prank on the doorstep of a student. Photo: The Mancunion

Similarly, in October 2019, a Manchester student uploaded of an unsettling photo of a sheep’s head which had been left on her doorstep in Fallowfield.

The student and her housemates were understandably shaken at first by the creepy gift, but soon realised that this too was a prank, played by some friends who had picked up the head somehow at a social.

Following this most recent discovery of the dead lambs in April, members of the FSG appealed to the student who had posted about it to report her findings to the police, the council and the RSPCA, with one student urging her to call the authorities as they believed the “dead lambs were likely used for bloodsports, [a] serious crime”

It appears animal body parts are a common find in the are, as another student joked about an animal’s liver which had been dumped near their house: “Throwback to the liver that chilled outside out house for ages.”

After getting in touch with the Manchester student who found the lambs, she told me she had reported the crime to both the police and the council, but regrettably had not reported it to the RSPCA as she saw little point in doing so since the animals were long dead.

The student expressed her anger and sadness at the scene she had stumbled across at the end of her street but regretted that she could not provide any more clues about its origins, as neither the police nor the council had got back in touch with her.

Despite the depressing nature of the discovery of these poor lambs, the response from students to this post was largely very positive, emanating compassion and a strong desire for justice.

If students continue to be vigilant around the Fallowfield area by reporting all crime and suspicious activities to the police, we can slowly begin to make the student area a safer, kinder and better place to live for everyone.