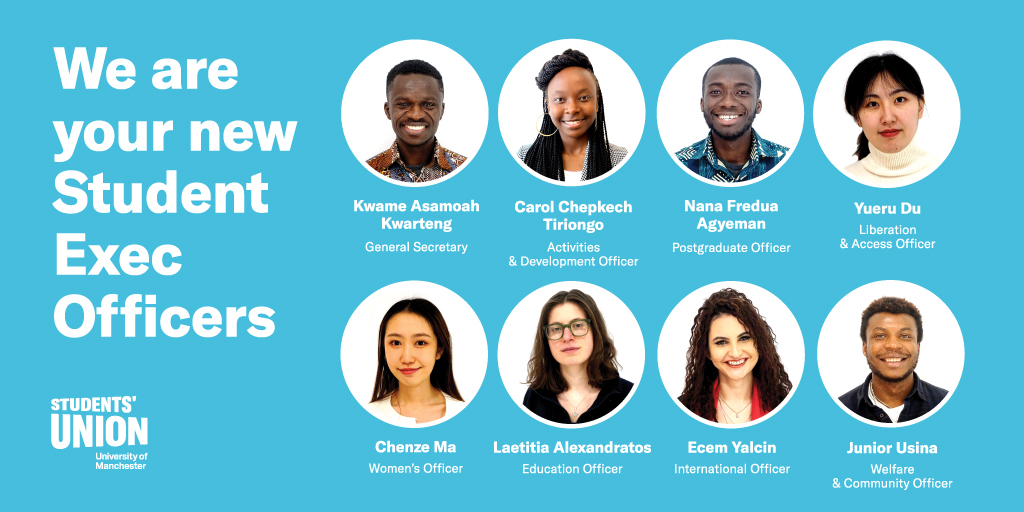 Manchester Students’ Union (SU) has welcomed one of the UK’s most diverse executive teams – with a group of student officers all stemming from “international roots”.

On Thursday, the SU waved goodbye to the 2019/20 team following a challenging academic year plagued by staff strikes and the coronavirus outbreak.

The 2020/21 team, which is made up of eight mostly new officers, will be tasked with ‘campaigning for the rights and interests’ of students on their return to campus in September.

All eight roles have been filled by either international or black and minority ethnic (BAME) candidates – including, for the first time, two Chinese students.

The team were elected at the SU’s annual elections in March. General Secretary Kwame Kwarteng was the only incumbent to retain his position.

Following the election in March, Kwarteng said: “It’s yet to sink in that for the first time in Manchester Students’ Union’s history we have eight international roots duly elected as executives for the 2020/21 academic year.

“We were voted for by students who believed in us not by the colour of our skin or English proficiency but by the impeccable manifesto each of us had.”

This Friday Kwarteng added: “In 2019, I got elected as the first international student to ever lead the University of Manchester Students’ Union as a 158th General Secretary.

“On the 1st of August 2020, I will begin my second term in office as the re-elected General Secretary of the University of Manchester Students Union. Special thanks to everyone who has supported me through it all.”

Manchester SU said: “The 2019/20 Executive Officers achieved so much this year – from divestment, to decolonising the curriculum, and even launching UoM Olympics, to name just a few. We wish them all the best of luck with the future.”

If the guidance allows, the University wants to get students into the classroom for tutorials in September with lectures delivered online.

But The Mancunion understands that SU staff will be following University guidance and working from home until at least the 1st of September with a phased return during Semester 1.

Students are likely to have to follow strict health and safety rules when vising the SU during this period.

This could include mandatory face coverings and maintaining a 2-metre distance from anybody outside of their support bubble.