Amid growing numbers of Covid cases on campuses, the NUS and UCU have come together to ask the government to keep students and staff safe
News
Photo: Wikimedia Commons

The University and College Union (UCU) has joined forces with the National Union of Students (NUS) to pressure the government and university bosses into taking steps to fight Covid-19.

In a joint statement released on October 1, the two main unions present on campuses up and down the country called for:

It comes amid growing frustration from students due to outbreaks of Covid-19 on University campuses, such as Manchester Metropolitan, Glasgow and Bournemouth.

The UCU has been putting pressure on the government to move as much teaching online as possible, as well as to take other measures to make campuses safe for students and staff.

Rank-and-file members of the UCU around the country have been meeting among each other and with students to discuss how best to pressure both University management and the Government into making campuses safer. 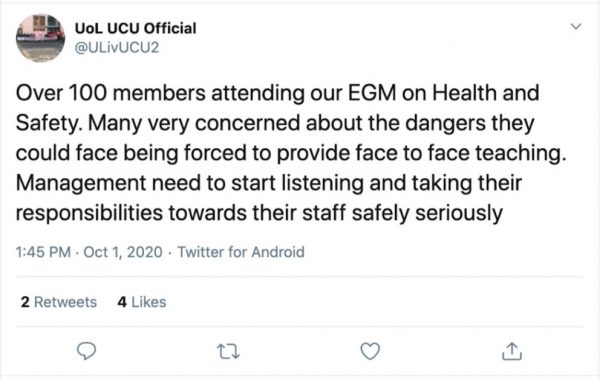 The University of Manchester branch of the UCU has also called for an end to face to face teaching, due to growing cases of Covid-19 in student halls – largely in the Fallowfield accommodation campus.

UMUCU has insisted that all teaching must be moved online unless face to face is absolutely necessary, has called for University-wide test-and-trace, and has demanded PPE for all staff to be provided by the university. 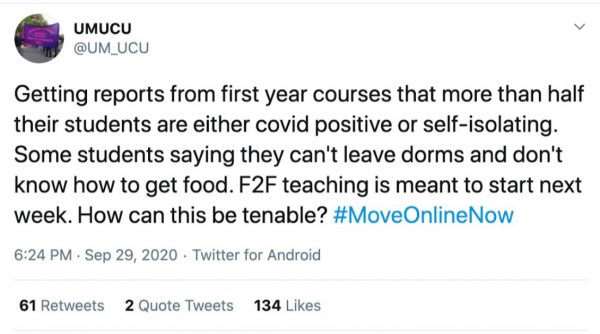 Students around the country have also been coming together to protest unfair living conditions under lockdown, including the blocking of fire escapes to keep students in halls.

Students have also been organising in Glasgow, where a large outbreak of the virus has forced thousands of students into lockdown. Organising as Glasgow University Solidarity Collective, students have released a list of demands for their university in response to actions since the beginning of the semester.

While the University of Manchester has not put any halls of residence into lockdown, there are reports of increasing cases in Fallowfield.

One student, living on the Fallowfield campus reported “madness” as out of 24 flats in Sheavyn House, 23 are in isolation after experiencing symptoms of Covid-19. This is not limited to halls either, as students are also testing positive in privately rented houses.

The University of Manchester has reported 221 cases of Covid on campus, although as The Mancunion reported yesterday, there are fears this number is much higher.

The University has insisted that everything possible is being done to keep students and staff safe on campus, with daily updates on the number of campus cases published.

In a statement given to the Mancunion, Dame Nancy Rothwell said: “We recognise that this is a difficult and worrying time for our community. Our top priority is the safety and well-being of students and staff, which is why we have put in place a comprehensive range of support measures.

“Our arrangements ensure that our campus remains as safe a place as possible to work and study, in line with Government guidance. We have planned for a blended mix of online and in-person teaching, but with face-to-face teaching delivered only where this is deemed by local leaders to be appropriate, required and safe to deliver. We are keeping these arrangements under constant review.”

Read the full statement by the Unions here.