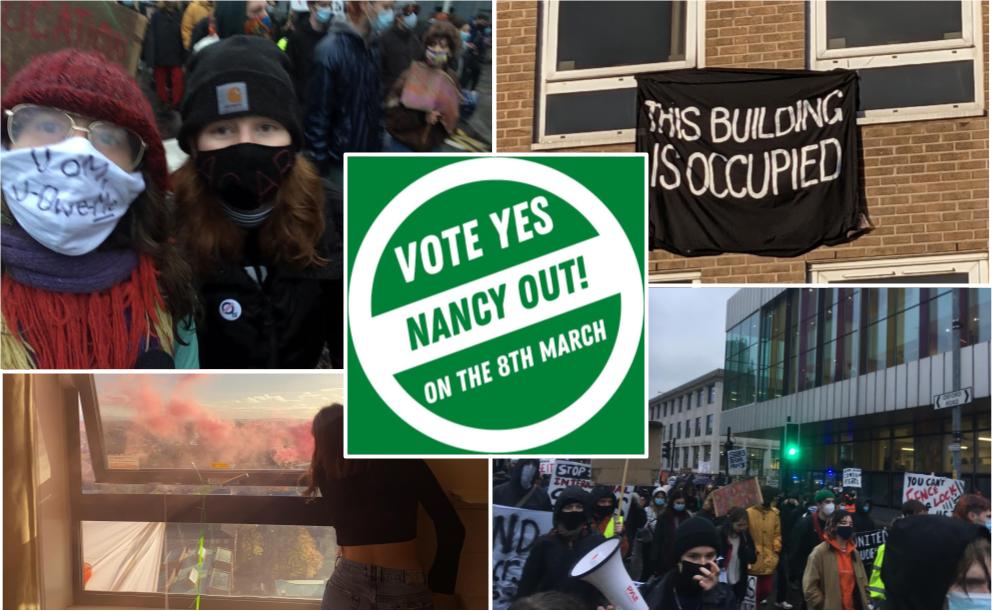 It will be a referendum on whether or not we should pass a vote of no confidence in the President and Vice Chancellor of the University, Nancy Rothwell, and the rest of her Senior Management Team.

This vote is truly unprecedented; we have never held anything similar in Manchester, and it is very rare that students in the UK attempt to vote out a Vice Chancellor.

But we are living in exceptional times. No one could have possibly predicted the succession of events we have seen at the University of Manchester since the beginning of Semester 1 in September.

In the unlikely case that you need reminding, we’ve seen thousands of students contract Coronavirus, fences costing £11k erected around the Fallowfield campus, a tragic suicide, an occupation that cost the University £12million and numerous instances of police and security violence on campus, particularly aimed at black students.

While students have a fantastic ability to make light of the most difficult circumstances, the current situation is desperately serious. People’s lives have been fundamentally damaged by the University’s actions since September.

The Covid outbreak in Fallowfield alone, in my view, put countless lives at risk, whether those of students or of the local community. The University totally failed to look after students during this initial outbreak, isolating students were left without food or instructed to go to Sainsburys with a mask on to collect provisions.

The mental wellbeing of students, particularly when self-isolating, has suffered immensely through the last few months. This mental health crisis was only exacerbated by the erection of fencing around the Fallowfield campus – a decision that was rushed through by the Senior Management Team, who didn’t even alert staff on campus that it was happening.

The treatment of black students and students of colour on campus has been a complete farce. We must not forget the instance of racism on campus back in November, when a Black student was racially assaulted by campus security just metres from his front door, on the basis that he “looked like a drug dealer“.

Nancy Rothwell then appeared on BBC Newsnight and “misspoke” about having apologised to the student in question.

More recently, the heavy police presence on campus (sanctioned by the University) has left students feeling unsafe in their own homes, and has put students of colour at a far greater risk of police violence. Black people are 40 times more likely to be stopped and searched by police than white people.

By deliberately bringing disproportionate numbers of police onto campus, the University management is putting many students at a higher risk of police violence and intimidation, as well as traumatic stop and searches.

As dire as the current situation is, we are not helpless. If the last few months have proven anything, it’s that when students fight back, we win.

We tore down fences, occupied Owen’s Park Tower and protested time and time again to force the University into listening to our demands. We have made national and international news and have inspired University students across the country to do the same.

We cannot go on any longer with a management that is as callous as this, and we don’t have to. If this vote of no confidence is a success, the Student Union will campaign for the resignations of Nancy Rothwell, Patrick Hackett, Simon Merrywest, April McMahon and Luke Georghiou.

These are the people collectively responsible for the unacceptable treatment of students and staff at the University of Manchester since September 2020, and arguably much longer.

If you vote Yes on the 8th of March, you will have your voice heard and help make the University of Manchester a better, safer place for all of its students.