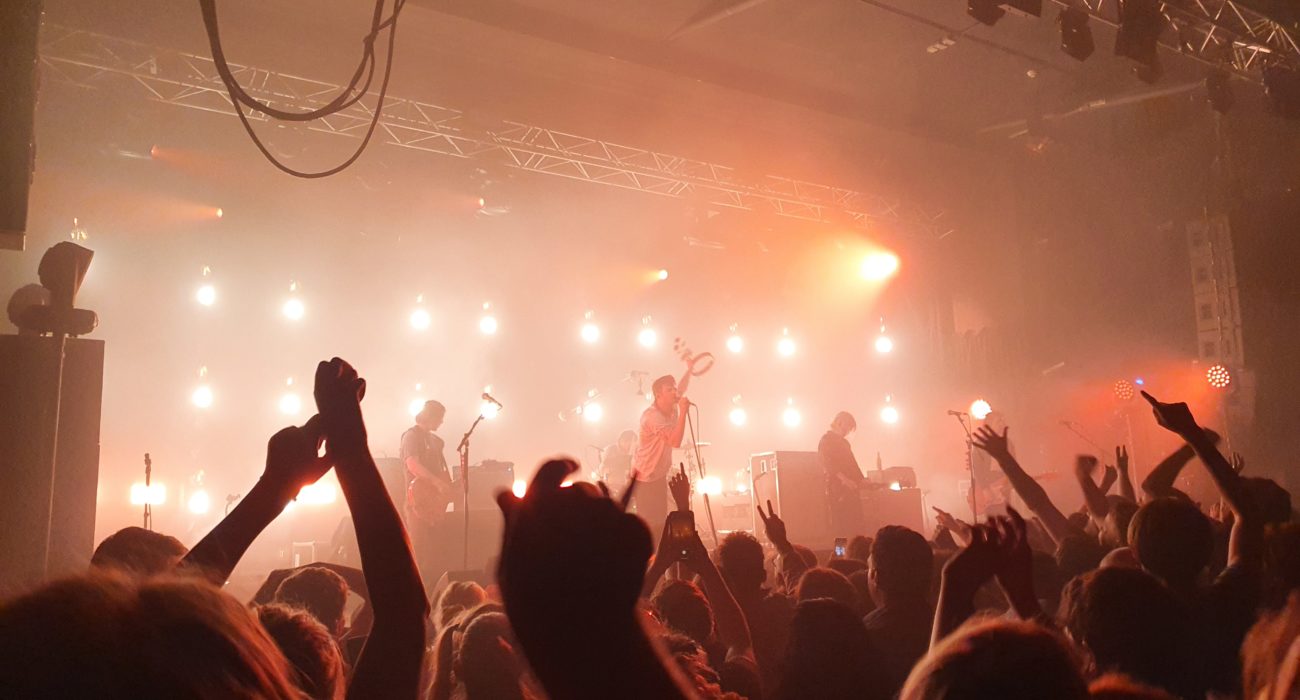 Ten minutes before post-punk titans Fontaines D.C. were due to be on stage, I was sitting on a bench, resigned to the fact that my name had apparently been missed off the guest list, and that I would have to console myself with a dazed meander home via the 142. Luckily, with the flash of an access-all-areas pass, the wonderful SU team had me in Academy 1 just in the nick of time. I was left with only a fleeting moment to revel in these James Bond-esque antics before a victorious Fontaines D.C. took to the stage, opening with sophomore title track, ‘A Hero’s Death.’

Between menacing guitar stabs and ‘ooo’s’ reminiscent of The Beach Boys, the whole room knew that they were witnessing a band at their highest peak yet. Despite their second and most recent album having been released over a year ago, towards the tail end of lockdown summer, the songs felt as exciting and gripping as you could hope.

It’s rare to witness a band of only two albums grow to this size and majesty, and the result is a crowd who will roar at every opening drum pattern and bass riff. Singer Grain Chatten’s frenetic, yet uptight delivery, and refusal to say anything at all between songs, were testament to a band who knew their music left nothing to prove.

There’s an intense energy to their songs, like witnessing a shark up close. It demands your full attention, triggering a fight or flight response, yet you can only gaze in awe with the knowledge of the glass barrier between you. But that glass could break.

Unhinged guitar squalls are reigned in just in time before a pounding wall of toms, cymbals and bass hits you. Each track feels like it could be shaken apart at any moment by the force of its own momentum, but they never do. The band are sounding even tighter than on their 2019 tour, giving Grian free-reign to deliver his hard-hitting sermons to an audience in rapture.

The key question is what next? Will they be, as my friend quipped, ‘the next U2’? After three sold out headlines at Manchester Academy in a row, they could certainly try their hand at an arena-sized venue. Though somehow I can’t quite picture them heading to Old Trafford. But even the Victoria Warehouse wouldn’t fit the near-7000 revellers who witnessed Fontaines D.C. in Manchester last week.

Anyway, I just don’t see them as an arena or stadium band. The incredible energy they bring to their live shows couldn’t translate one or two-hundred rows back – a huge part of their appeal comes from witnessing Grian up close.

I think the answer will lie with what musical direction they take next. More of the high-octane rave-rock of ‘Televised Mind’ (you can picture Keith Flint’s raging vocals over the top), and Fontaines D.C. could become one of the best festival headliners of the decade. More ballads a la ‘Dublin City Sky’ or ‘Roy’s Tune’, and they could have whole arenas singing along in perfect harmony. But I think, at their core, they will always be an underground post-punk juggernaut. And whatever the future holds for the quintet, I’m so glad to have witnessed them at Academy 1 on Friday night.