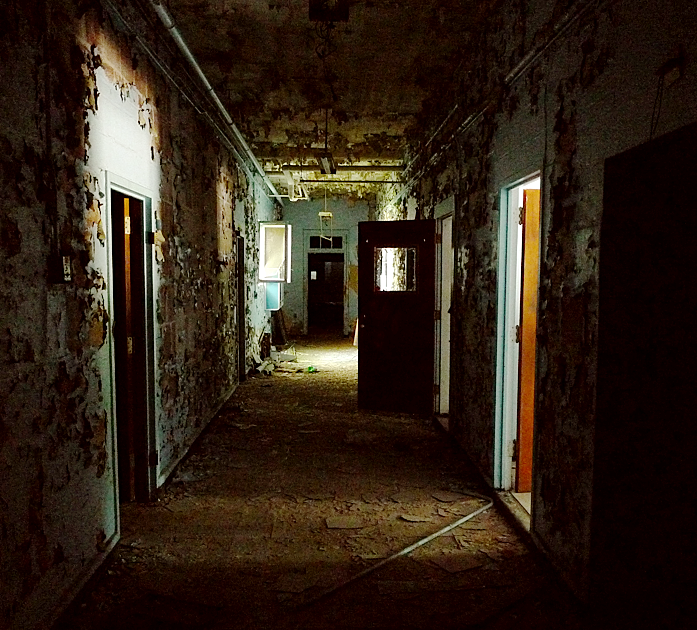 Set in a labyrinthine hospital run by sex-crazed maniacs, Forgiveness tells the story of three women who respectively wake up deaf, mute, and blind. The film unfolds in three parts and gives each protagonist a ‘chapter’ of story to themselves.

The cyclicality of these stories make the film both predictable and boring. They often consist of familiar scenes of panicked running and predictable jump-scares, only to be confronted and rendered helpless until the cycle repeats again. Although stylistically interesting, this choice, combined with the fact that the majority of the film has no dialogue, leaves the three leads feeling all very similar, and much like their disabilities, little more than thinly written plot devices.

Central to the film is a host of religious images and allusions. However, all too often these read as false and pretentious and appear incongruous to the torture-porn-esque story. With the majority of the runtime dedicated to indulging in sexual assault and preying on helpless women, the film is gratuitously unpleasant. The picture turns sour when audiences realise that the fetishised and objectifying gaze of the film is not just a thematic choice but stems from the directing and writing behind the camera.

Horror films have a long tradition of gore and nudity. Forgiveness seems to engage with this history without ever really understanding it. The austere tone and arthouse aesthetic of this film forgoes the opportunity to be playful and instead depicts torturous scenes of sexual violence for no tangible or thematic purpose.

Similarly, its depiction of of lesbian relationships in particular, seems very reductive as the film does little to explore these themes beyond their purpose as a gratifying spectacle for a male gaze. Writer and director Alex Kahuam has clearly bitten off far more than he can chew, or in this case and many others, even seem to basically understand.

Ultimately, Forgiveness gains nothing of its title and is a grimy and exploitative horror film. It dehumanises its protagonists in troubling ways and, even when taken outside of its questionable social contexts, it is a boring and repetitive watch. Familiar scares and one dimensional characters leave audiences questioning the need for such a film.