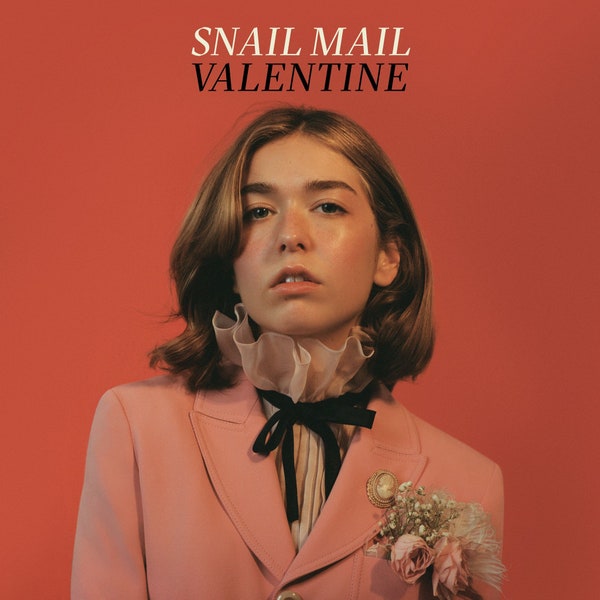 Written between 2019 and 2020, during a time of intense societal, as well as personal hardships, Lindsey Jordan (AKA Snail Mail)’s Valentine is more mature than its predecessor. It highlights her time away from music as a chance to develop her voice and style deeper. Jordan has always been noted for having a great degree of control in her voice, guitar playing and lyrics, as demonstrated in her 2018 debut album Lush. Valentine is ultimately a eulogy for love, a search for a lost identity, and has an expansive stretch of poignance and profundity, inherent within the song writing and throughout the entire album.

Between going through a breakup and spending 45 days in a rehabilitation centre in Arizona with no method of creating music other than a broken guitar and a notebook, Valentine is the product. It’s an emotional whirlpool which paints a brilliantly vivid picture of lamenting a past lover. Evidently, Jordan approaches such subject matters with gentleness and sensitivity. She can control when certain lines need more grit and emotion by using a deeper rasp and snarl than previously. As said in an interview with Pitchfork with Quinn Moreland, “It’s theatrical as hell.” Jordan has never been one to sugar-coat her emotions. This album is a further testament to her use of music as catharsis, and a documentation of the stages of breakup sorrow.

Song by song break down

The album opens with the title track ‘Valentine’ which is an ethereal start to the album. It is a quintessential love song to her “Darling Valentine.” It’s also a reflection on Jordan’s fame and the rise of her becoming a notable female indie icon. ‘Ben Franklin’, the second single from the album, is in my opinion slightly more memorable. It’s a darker and heavier 3-minutes than we usually know from Jordan, with dense garage-y synths and beats. The lyrics are profound and raw addressing her time in rehab and personal struggles in a totally punchy and transparent way.

The lighter, guitar driven and folky moments offset the heavy and more intense ones. This just demonstrates the vastness and multi-polarity of the album. ‘Headlock’, where Jordan sings “Man, I’m nothing without you”, is a wistful realisation of breaking completely from a lover. I think the soft piano trills and vocal harmonies provide the song with a hopefulness and lightness, making the album more intense. Jordan also speaks about her catharsis in darkness and death and exploring the “Nothing on the other side.”

The soft ‘Forever (Sailing)’, is a bittersweet tune which reiterates the emotional vulnerability she captures so exquisitely in her music. The intentional repetition of “You and I” and “So much destruction / Look at what we did” is totally captivating. It’s a definite personal highlight of the album.

In ‘c. et. al’, Jordan sings “Baby blue, I’m so behind / Can’t make sense of the faces in and out of my life / Whirling above our daily routines.” Addressing the depressive and dissociative state which follows a breakup. She sings with lethargy accompanied by stand-out guitar plucking. The folk-oriented instrumentation is reminiscent of Elliot Smith or Jeff Buckley, and has similar emotional grit and rawness.

There are also moments of a more typically upbeat sounding indie record. This is seen on ‘Glory’, which addresses her fame and how it contributed to her time in rehab. Despite moments like these not really catching my attention as much as other moments in the album, it shows her immense capability as a guitar player (both electric and acoustic). This furthers what was already established on Lush, on tracks such as ‘Let’s Find an Out.’

In the album closer ‘Mia’, Jordan sings about a “Lost love so strange” with a live string arrangement accompanying the soft pluck of a guitar. The lyrics are carefully crafted, yet devastatingly raw. It makes me think how lucky I am that I’m not going through a breakup right now. It paints an accurate depiction of a heartbreak and yearning for, yet painfully closing the door on, a past lover. Valentine demonstrates that Jordan is in full control of her growth and blossoming, and does this whilst painting a passionate portrait of pain and the hardships of recovery.

Snail Mail kicks off the UK leg of her tour in June in Manchester, at the Manchester Academy 2. (Postponed due to vocal cord injury). Buy tickets here