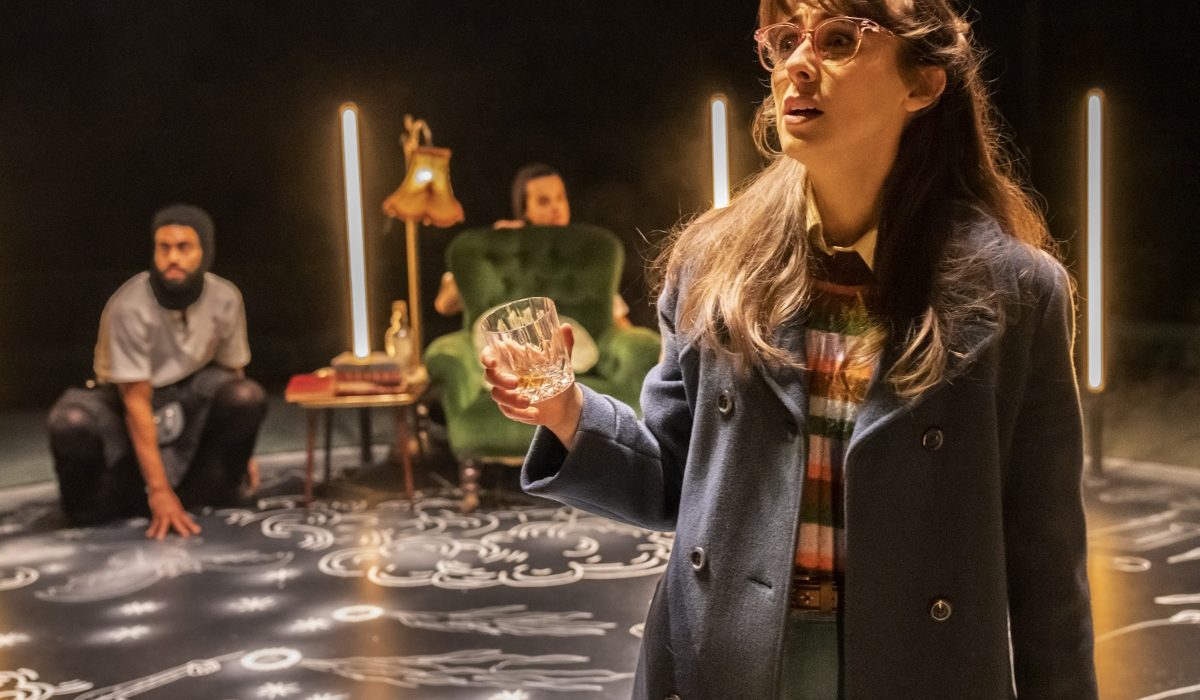 In all honestly, I wasn’t that excited for The Strange Undoing of Prudencia Hart, but I was excited for my first ever proper Royal Exchange Theatre press night. My first ever RX press night was Bloody Elle back in June, but Covid meant there was no press social, so it was lovely to have press drinks on the mezzanine for the first time – admiring the beauty of the old Exchange building.

When Prudencia Hart finished, I walked out of the auditorium and through the bar where I passed the Royal Exchange (RX) Theatre’s lovely press officer, Paula, and asked her how on earth I’m supposed to review that.

I was at a complete loss for words – and those who know me know that I always have something to say. I don’t always say it but it’s in my head, nonetheless. I’m creative and opinionated, and this review is going to be filled with creativity and opinions, but it took me a good few moments to collect my thoughts. I knew I loved the show; I just didn’t know what to think of it. So much happened, and the show kept reinventing itself, so I felt a little overwhelmed – in a good way.

The Royal Exchange Theatre traditionally puts on established musicals over the holiday season. Its last one was Gypsy in 2020; it has also produced adaptations of Guys and Dolls, Into the Woods, The Producers, and other well-known (though not necessarily “mainstream”) musicals. I’m always thrilled and excited by the RX’s musical announcement, for it’s always a musical I’ve been hoping to see – but this year’s musical is one I had never even heard of.

By adapting a new, little-known musical (well, musical play), the RX’s artistic directors are putting their mark on the theatre. They’re bold and ambitious – and probably want to give lesser-known plays and musicals a chance to shine. I’d never have heard of Prudencia Hart if it wasn’t for the RX.

Next year, they’re being even more ambitious – their annual musical is a brand-new one: Betty! A Sort Of Musical. Though with Maxine Peake in the lead role, they’re reducing the risk – she’s guaranteed to bring in the audiences. I’d see her in anything – and I did: you don’t go to see Happy Days to be entertained…

Perhaps my scepticism of Prudencia Hart was unfair – because I did not actually know what to expect. The initial information was deliberately ambiguous – but, to be honest, it would be virtually impossible to give audiences a good understand of what this musical play actually is.

The show began with a pre-show performance. The cast’s costumes gave me Midsommar vibes. I knew that this was a folk musical but the costumes had be wondering whether it was going to focus on a cult.

The cast played instruments and sang a couple of well-known songs – Lil Nas X’s ‘Montero (Call Me By Your Name)’ and Rick Astley’s ‘Never Gonna Give You Up’. The end of the first act made it clear why the former song was sang – and the song was repeated in the second act.

It took a little time to get into the show, and the story was interesting but hardly the most exciting. It slowly began to pick up, becoming more intriguing with each passing minute.

Although Joanne Thompson was fantastic in the title role, her character was way less interesting than the play’s minor characters – played by the ensemble. The male leads, Paul Tinto (Devil) and Oliver Wellington (Colin Syme), appeared very comfortable in their parts – and also seemed to be having lots of fun playing comical, colourful characters. The ensemble was completed by Lawrence Hodgson-Mullings (Corbie), Amelia Isaac Jones (Corbie) and Malin Lewis (Musical Director and Additional Arrangements).

In this regard, I was reminded of Good Omens – David Tennant and Michael Sheen are brilliant, but the ensemble steal the show. But whilst Tennant and Sheen’s characters are fascinating, Prudencia was kind of annoying – though I guess that was the point. Dry, dull Prudencia was supposed to be overshadowed by the big, bold characters around her.

In fact, the first act’s best scene was the one that didn’t even include Prudencia. It was nice to have a break from her constant whining and moaning, if I’m honest!

This scene was the morning after the hen party, in which the four women (played by three men and one woman) slowly remember exactly what happened the night before. Hodgson-Mullings absolutely stole this scene; he gave one of the funniest performances I’ve ever seen.

The final memory involved Prudencia but instead of the women recounting this one, there was a flashback – Prudencia came back – before the play flashed forward again.

It was this scene that made me realise the potential of this play, and although it did not stay at this level for the rest of the act, the play then took a mysterious turn. Act 1 ended with a huge twist, a shock revelation that reinvented the whole play – though it did not come out of nowhere; there had been a recurring theme that seemed a little out of place but now made a lot of sense.

Act 2 had a completely different setting, and it focused more on Prudencia. Finally, Thompson was allowed to showcase her talent, and Prudencia became likeable, interesting and, most shockingly of all, entertaining. She finally became a protagonist that we wanted to root for. This is testament to the play’s brilliant writing and directing; Act 2 was a complete reinvention – of both story and character.

Whilst Act 1 felt like a musical – albeit a modern, folk musical – the second act felt more like a play with music. If I remember correctly, there wasn’t any singing until later on in the act. This change was jarring and strange, but once again, it worked well to separate the two acts – which are truly worlds apart (key word: worlds) regarding tone and style.

I’ll say no more about the story, out of fear of saying too much…

I was a little disappointed by the show’s set, staging, and use of space. I was not expecting this to be a “big” production like the musicals that the RX has produced before, but the theatre is known for using its stage to great effect. In Prudencia Hart, however, the stage felt a little squandered at times. That said, there were some scenes where staging and set were used very well, especially later in the second act when Prudencia repeatedly tries to escape the place that I will not reveal in fear of giving away too much.

The music was fun and folksy; it helped transport us to this fictional world that looked a lot like ours but was a little more eccentric. I liked the inclusion of Malin Lewis – the show’s musical director – in the cast.

The costumes, too, were simple but effective, adding character to the characters. That said, some of the costumes looked a little cheap, or like they had been hastily chosen, but part of me thinks that that could be the point: this musical is sort-of anti-musical. This musical is folk.

The Strange Undoing of Prudencia Hart runs at the Royal Exchange Theatre until 15th January.