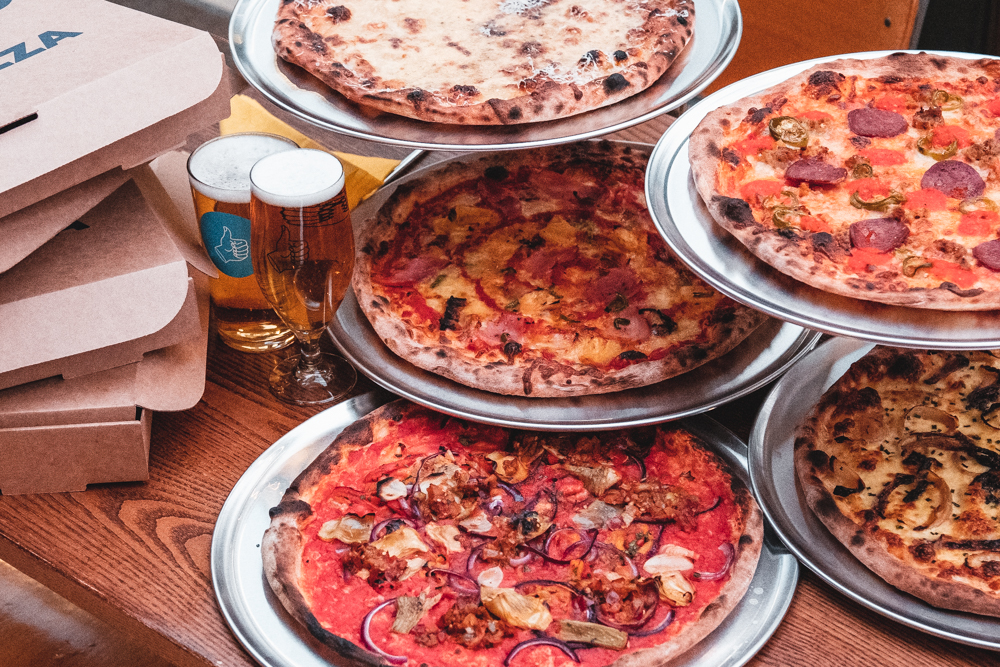 If you’re like me, you’ve just started Veganuary, trying the whole new year, new me mantra. So, whilst you’re enjoying it and having fun experimenting with cooking and exploring all the vegan substitutes you can find in supermarkets, you’re concerned about eating out with friends that aren’t embracing the plant-based plunge. Also, Christmas probably left you skint. Luckily for us, some of Manchester’s most loved eateries are offering incredible deals, up to 50% off their entire menus! I’ve put together some of my favourites, giving you a vegan option to try for every day of the week!

Monday: 50% off Sarnies, Salads and Small Plates at the Smithfield Social

The Smithfield Social is a great jewel in Thomas St’s crown. The bustling street in the Northern Quarter is home to some fantastic eats, including those served up at Smithfield. Hungover students are probably familiar with their brunch menu, containing many great vegan options year-round. However, if you eat in from 4 pm Monday to Friday, you can sample as many small plates, sandwiches and salads as you like for half price.

Half price on food from 4 pm, Monday to Friday

Tuesday: 50% off Vegan Pizza from Nell’s (at Common Bar)

The last time I tried this pizza I had been day drinking and needed something to soak up the alcohol. This pizza definitely did the trick. In honour of Veganuary, Nell’s have launched 3 new vegan pizzas: the Margherita (a classic, and my favourite), Aloha Vegans!, their vegan Hawaiian, if you’re that way inclined, and the Friarelli and Beyond, a spicy pie with Beyond Vegan sausage. To get these at half price, you do need to book at one of the bars: Common, The Beagle, or Kampus. Don’t worry if you’re not up for a pint, they offer some great low and no-alcohol drinks, with 50p from each going to charity. Bottoms up!

Enjoy a little piece of Latin America on Peter Street! 2-4-1 Tapas includes some gorgeous vegan plates for you to share with friends (or hoard for yourself, I won’t tell anyone) and you also get 2-4-1 on rum serves, to go along with it! This offer is valid from Sundays-Thursdays in January, but if you swing by on a Wednesday at 6.30 pm you can try your hand at Salsa dancing in their beginners class, completely free! Who needs a January gym membership?

Thursday: 50% off a Full Vegan Breakfast at Trof

Trof is usually my go-to at the weekends, their roasts are some of the best in the City. The restaurant, right on the end of Thomas St, is home to some of my favourite comfort foods, including their full vegan breakfast, which you can enjoy for half price on Wednesdays and Thursdays! If this isn’t your speed, or the exam season sleep schedule has gotten to you, you can visit until 10 pm to try some of their other vegan dishes, still at that lovely 50% off.

Half price food every Wednesday and Thursday in January

Friday: 50% off food at Cane and Grain

We’re back to Thomas Street again! This time Cane and Grain, the streets’ self-described ‘Bar and Rib Joint’ is offering 50% off their food in January. You might think that doesn’t sound too vegan, and there are definitely a lot of options for the meat-eaters out there this month, but they have some brilliant vegan burgers, as well as their usual fare. Many dishes can be made into a vegan version on request, including the Truffle Poutine, making their twist on the Northern night out classic of chips and gravy vegan friendly for all to enjoy. If you want something to wash all that down, take a trip upstairs to Science and Industry, a speakeasy serving up some classic and modern cocktails for those in the know.

The Northern Quarter isn’t the only place you can find a great Veganuary deal this month. Over in Ancoats, Elnecot is giving 30% off their menu, including their weekend bottomless brunch, which has some hearty vegan options for you to try. Along with unlimited drinks for 2 hours, including prosecco, martinis, bloody marys and lager, you can pick one of their several vegan brunch dishes to enjoy.

30% off food and drink excluding Sundays

Sunday: 50% off Vegan Roasts at Blackleaf.

If you’re a seasoned vegan, you’ve probably been to Blackleaf at Alvarium. It’s long been a vegan hotspot in the Northern Quarter. The all-female run eatery serves up inventive and popular plant-based meals every day of the week, and as if that wasn’t reason enough to visit, they’re offering 50% off their entire food menu to help Veganuary efforts! My pick is their Vegan Roast, usually £14.50, but at £7.25 this month it is an absolute steal. The perfect way to cure a hangover after a post-exam night out, covered in gravy but completely meat-free!

50% off the entire food menu during January