Who does access and inclusion well? Which artists are leading the way…

Spotlighting artists who make their gigs safe and accessible.
Music

Having explored the ways in which the music industry and gig environments can be inaccessible and what needs to change to make them more inclusive, here are the artists leading the way for accessibility and inclusion at gigs:

Crawlers did an Instagram Q&A on their story and were asked “Are you gonna have moshpits at ur shows”, to which they replied that they tell the crowds “to ask for CONSENT and be aware so everyone can have fun no matter how they enjoy music”. This small act (pre-warning and stating that moshing may occur) can make the gig far more accessible and safe for those who may be uncomfortable. This massively widens their audience’s diversity. 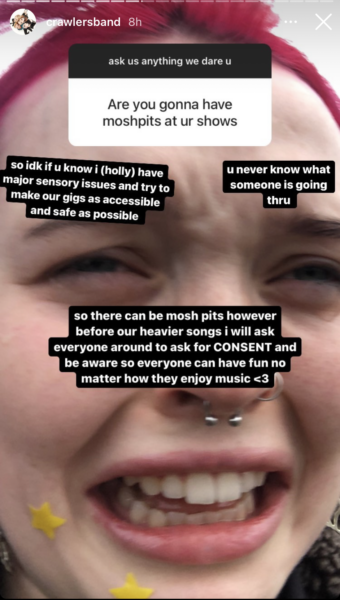 Frank Carter creates female identifying-only mosh pits and describes them as the happiest mosh pit you’ll ever see. This is a prime example of how women can feel safer in the ‘rock and roll’ environment.

Overpass has a story highlight on their Instagram titled “SAFE GIGS”. This contains typing from them on how it is unacceptable to touch other people without consent during a gig. They also encourage fans to not be a passive bystander and to call out all unacceptable behaviour.

Boston Manor said at the beginning of their gig that anyone in trouble should make a T-sign with their arms. This would result in an immediate halt of the gig, while bouncers help them. By reassuring their fans that they value safety, and have measures in place, fans feel more comfortable and safe to call out inappropriateness.

Fenne Lily did a ‘Lonlyfans’ where she matched up people who bought tickets individually, so that they would have a gig buddy.

Yard Act made an Instagram post on their female fans getting “treated inappropriately by drunk older men.” Their post contained a “stern warning” aimed at these people, whilst showing they care about the safety of their fans. Finishing with a note specifically aimed at men to behave better, Yard Act showed that they have zero tolerance for inappropriate behaviour and harassment at their shows. 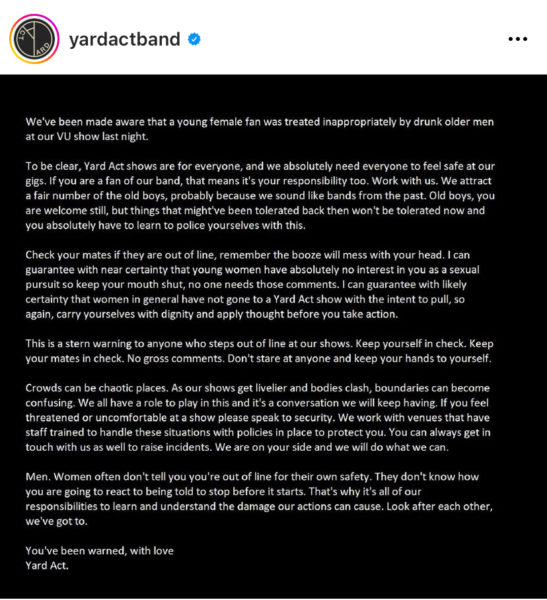 Parklife 2022 Review: A celebration of Manchester plagued by poor sound

Jessica Hamilton reviews Rebecca Black at Manchester’s Deaf Institute as she paves herself a brand new path to pop stardom.