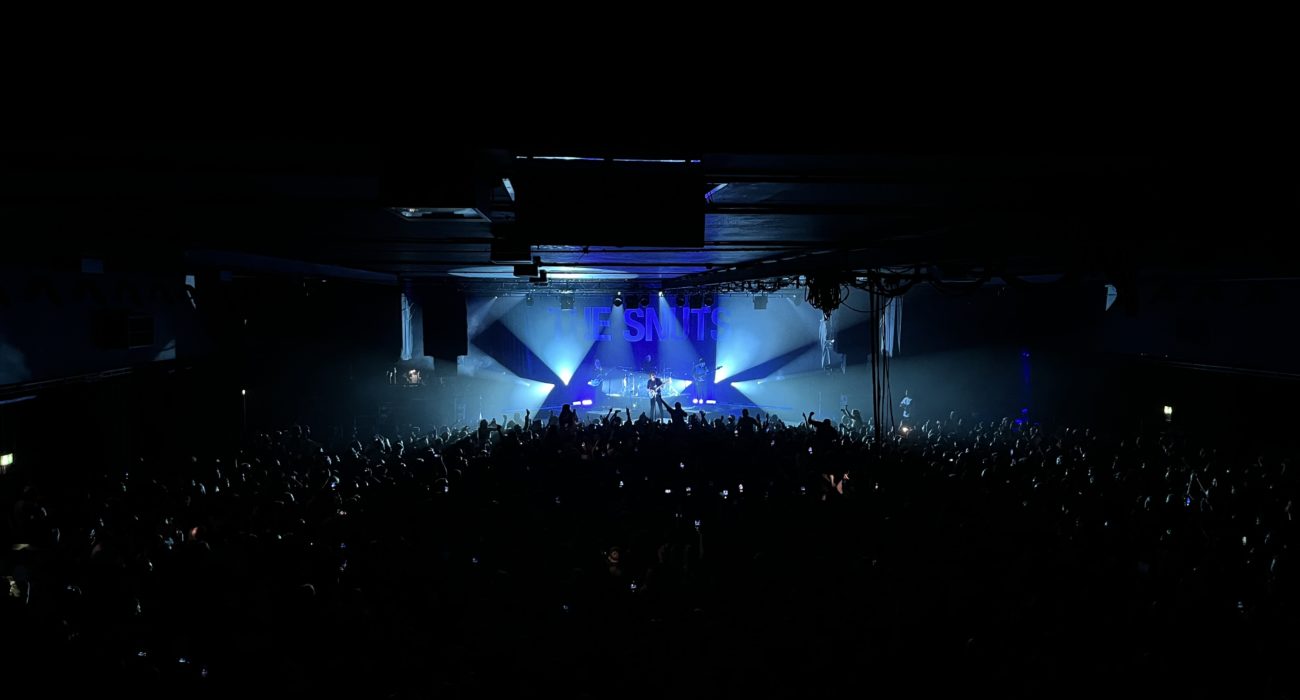 Opening night of The Snuts headline tour in sold-out Manchester Academy did not disappoint. It’s no secret that I love The Snuts, I love how their music is politically charged and they don’t shy away from controversial topics, and I love their appreciation for their fans. Having interviewed the band a few weeks ago and being told: “I can guarantee you’re going to be blown away; we’ve put a lot of production into the show, so I think it will be one to remember”, I obviously had high expectations. Not only were these expectations met, but they were exceeded.

Supports for the evening were Lauran Hibberd and The Royston Club, who also both delivered. Unfortunately, in the indie rock genre/scene it’s rare to see women performing, so I have to highlight how nice it was to finally see women on stage. This is reflected in a typically male-heavy audience – I hardly saw any women in the crowd. 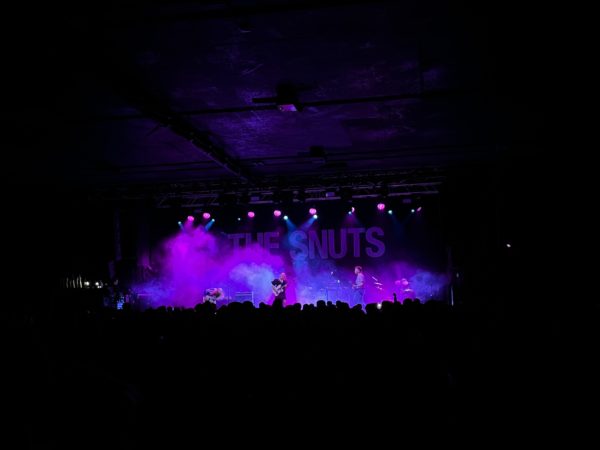 Lauran started with full force, and despite a limited reaction from the crowd she owned the stage. She didn’t receive huge engagement from the audience, but she was very aware of this and joked about it every now and again. I really liked how she didn’t take herself too seriously, with comments such as “girls sweat too”. I was in awe of how she still gave a stellar performance with limited reciprocated energy amongst the crowd. It can be hard to stay motivated to perform to the fullest when this happens, however this just shows how skilled Lauran is. In one of her final songs she got the crowd to scream with her, I think everybody there needed this release… Lauran warmed us up, and by the end of her set the Academy was filling up quickly. 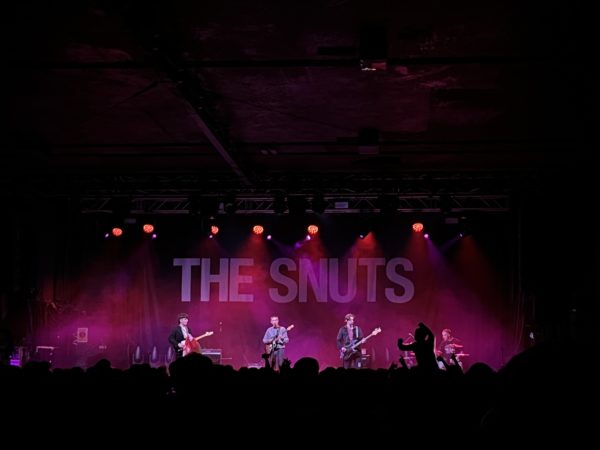 The second support was The Royston Club, who immediately received a cheer and crowds chanting “Wrexham” as soon as they walked on stage, fitting as the Welsh flag made an appearance too. Starting off with ‘Mrs Narcissistic’ and following on with ‘Believe It or Not’, it was clear The Royston Club have fans in Manchester who know every word. Treating us to two unreleased songs ‘The Deep End’ and ‘I’m a Liar’, the songs were well received and resulted in huge engagement and cheers.

This being the largest crowd these boys have played to; it was clear they were very appreciative for the support and fans, with comments including “make some noise for yourselves” and “it’s an absolute pleasure to be here with you”. They also fulfilled their role of a support successfully, continuously referring back to “who’s buzzing for The Snuts”. Again, this shows their appreciation to be one of the supports for the Snuts at such a huge venue. Slightly slowing the pace for the start of ‘Tangled Up’ they maintained the crowd’s attention, a risk but it worked.

Towards the end of their 30-minute set, the venue had almost completely filled – I would say they played to 2000 people. Leaving the stage, The Royston Club received a massive cheer and chants of “Wrexham” again. It’s clear to me since The Royston Club sound so great live, definitely as good as on the record (if not better), and have a huge stage presence, they soon will be headlining Manchester Academy themselves. 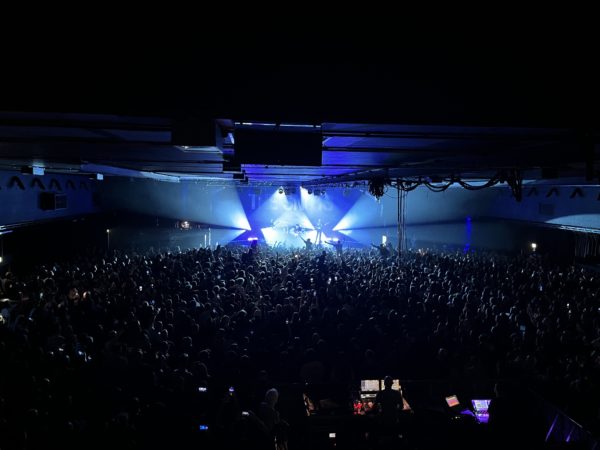 Time for the headliners, The Snuts. The Scots clearly know how to put on a show, with excellent supports, and from the get-go of their set, the production with lights, strobes and the sound effects. From the first steps on stage all eyes were on The Snuts.

Kicking off their set with ‘Burn the Empire’, The Snuts set the tone for the night and reaffirmed their political standing (“f*ck the tories”, “the tories won the last election, f*ck those c*nts”) – something I will forever applaud them for. With the crowd chanting back “Burn the Empire” like a cult, it is obvious The Snuts are leading the revolution.

Jack Cochrane knows how to command, conduct, and control an audience.

They 100% deserved to sell out the Academy with a capacity of 2,600. The lighting and strobes throughout the set matched perfectly and did nothing but heighten the crowd’s energy.

Not only was the production visually appealing but The Snuts sounded incredible live, and they played differently arranged versions of their own songs, keeping us engaged, expecting more and giving us all a night to never forget.

The performance of one of their hit songs ‘Always’, even hooked the curiosity of the Radio-4 dads at the back. ‘Somebody Loves You’ and ‘Coffee and Cigarettes’ maintained crowd focus and attention, all the way from the moshes at the front to the bars at the back. Chatting to the crowd, Jack said that Manchester is “our favourite city in the world”. Living in Manchester I obviously love this comment, however I’m not sure how well this will go down in Glasgow when the Glaswegians find out they’ve been betrayed…

Their performance continued to be dramatic and performing ‘Zuckerpunch’ for the first time since its release, the reception was insane. With Jack taking authority on stage and leading a clapping beat throughout the crowd, the performance was everything I expected and more.

The version of ‘Elephants’ was phenomenal, also bringing on a rap guest feature Big Bemz. With light-hearted banter from Jack like “you still with us?” it was clear The Snuts knew they were killing it on stage, and from the beginning to end the crowd never left their trance. They were still extremely genuine and appreciative of their fans saying, “I can’t tell you how much it means to us that you’re spending your money to see us”.

Before the show The Snuts tweeted “What songs you wanna hear on the setlist this week?” – they received 140 comments including song requests of ‘Blur Beat’ and ‘Fatboy Slim’. These songs were played excellently and (understandably) well received on twitter after the gig.

Manchester, Newcastle & London… What songs you wanna hear on the setlist this week?

Somehow the Snuts kept the crowd captivated even when they walked off stage before their encore. I have never seen anything like it. There was the classic cheering, chanting, and clapping before The Snuts returned to the stage and joked “Satisfied so far?”. Jack told an anecdote back to their first show in Manchester, which was to 10 people all of whom were their friends – quite the contrast! Showing even more appreciation to their fans Jack said, “Love you more than life”.  Finishing with ‘Glasgow’ to a massive reaction. The Snuts certainly left their mark in Manchester.

Without a doubt get yourself to a Snuts gig ASAP – these are performances not to be missed.

Serena is a national shortlisted Arts and Culture writer (SPA2022) with key interests in music, women's rights, accessibility and politic's influence in culture. With a passion to make social issues more accessible and digestible for the wider public, Serena's broadcast talk show (Sez Says) on Fuse FM discusses a variety of topics from political matters, to fashion, to interviews with musicians. Check it out on instagram: @sezsays_radio; You can contact Serena on twitter @serenajemmett or instagram @serenaj69