A passionate, provocative ballet based on the life of Giacomo Casanova
Theatre

Whilst I appreciate traditional ballet, it is not something I have much interest in seeing. Contemporary ballet, on the other hand, I love. I want to see every single Michael Ball production, and Rambert‘s Ghost Dances is, to this day, one of the best things I’ve ever seen – and since then, I’ve seen everything.

I don’t mind traditional ballet if it has a modern edge to it – or is just edgy, in one way or another. I’d definitely be up for seeing Akram Khan’s Giselle.

It’s for this reason that I wanted to see Northern Ballet’s Casanova. Whilst the dancing is traditional, it’s not your traditional traditional ballet. It’s raw, raunchy, and provocative. The poster immediately caught my attention, and after watching the trailers – for both the original and the current tour – I knew I had to see it.

Based on the Giacomo Casanova biography by Ian Kelly, this is a provocative tale of passion and destruction. Casanova lived every minute in a whirlwind of scandal and decadence. But behind the mask, there was more to the man. This sensational tale takes us inside the heart and mind of one of the most notorious figures in history.

The ballet drew us in right away, with pews (complete with kneeling nuns) spinning around the stage, creating a calm chaos – a wonderful whirlwind, of sorts, transporting us to the Italian Renaissance. 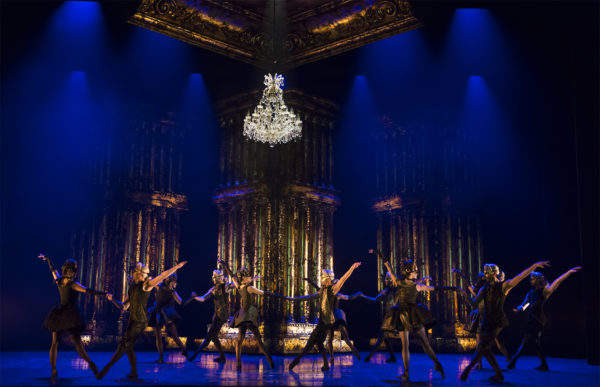 Whilst the cast changes for each production, our cast was led by the remarkable Joseph Taylor.Taylor has to be one of the most dazzling dancers I have ever seen; he’s completely captivating. Even when the tone of the ballet shifted in the second act, becoming serious and sombre – in stark contrast to the seductive and sensual first act – Taylor kept us entirely enthralled.

I did find the second act a little monotonous and repetitive. It began to drag a little. Now, it was not dull, but, rather, a sharp shift from the overwhelming charisma of the first act. It worked, though, in presenting the next chapter of Casanova’s life. The word motif comes to mind…

The last few scenes of the ballet, however, were beautifully disturbing. The curtain of solemnity lifted, revealing a storm of chaos that had been brewing underneath.

The ballet’s mesmerising final scene was a return to form – that is, its fabulous first act. I will not spoil it, but it was the most marvellous end to a beautiful ballet with a ferocious first act that was followed by a sombre second act.

The marvellous dancing, opulent sets, gorgeous costumes, and cinematic score (played live by Northern Ballet Sinfonia) created the most sensuous of experiences. The ballet flooded our senses and took our breath away.

Flawless, sumptuous, and sexy as f*ck – this is one of the easiest five stars I have ever given.

Northern Ballet’s Casanova plays at the Lowry (Lyric Theatre) until 21st May – the final stop of its UK tour.

Review: Oti Mabuse – I Am Here

The Lady Boys of Trafford

The Boys are coming to the Bridgewater Hall

There’s been a Double Murder at HOME

Hofesh Shechter Company (lead by Hofesh Shechter, OBE) returns to HOME with Double Murder – a double bill made up of Clowns and The Fix