In Conversation with Crawlers

Starting my weekend at Liverpool Sound City I finally caught up with Crawlers! After many reschedules (they are in high demand!), we hopped in their tour van and let the chat commence. Before we go onto the content of the conversations, I can safely say that Crawlers are very easy to chat to and the conversation flowed swimmingly. We discussed Neighbourhood festival, eyeliner, upcoming singles and tours, their latest single, social media and more…

Kicking off with the topic of the upcoming Neighbourhood festival (28/29 May), where Crawlers are playing on the Big Top Stage in the 28th, it wasn’t long before Amy had mentioned that she has attended the festival every year as its pretty much 10 minutes from her house in Warrington. Touching on this locality of the massive festival, the band said that it was “surreal” to be able to play at it and Holly added “it’s so cool – it always includes bands we look up to”. This sounded like a bucket list gig/festival for them, but of course they played there last year too! Hearing about last year’s antics leading up to playing at NBHD was amusing; from Amy bugging Holly to get a ticket and trying to persuade her to “come to Neighbourhood” and Holly being very relaxed saying “mehhhh I think I’ll be able to get in somehow”, to a band dropping out and Crawlers getting offered the spot – the band said this year they’ll try not to “freak the heck out”.

Holly went on to add that the line-up is incredible, with “so many great upcoming bands”. I asked which bands they are most excited to watch perform, to which they said: Daisy Brain, STONE, Eli Smart, Wet Leg, Gayle, to name a few.

Tickets for Neighbourhood Weekender can be purchased here!

We then moved onto the most serious topic of conversation – makeup recommendations. Due to the band being called, and calling themselves, the silly little eyeliner band, I (on a personal level) was just intrigued as to what brands they use that stay so flawless after performing on stage. A soon as I mentioned “silly little eyeliner band” the whole van was giggling, and Liv spilled the tea. The commitment was next level, whipping out her makeup bag, we got the accurate names of the products – maybe this should be in the fashion section as well as music…

Making jokes throughout including “this is *not* sponsored”, Liv revealed they use the Rimmel waterproof liquid eyeliner, and the NYX matte setting spray. Liv reaffirmed that she swears by this product and the waterproof eyeliner does not budge. Continuing to stay comical, she said “when you have the ‘El Depresso’ [depression], you need it. You cry and it does not budge a bit. I will have a full on melt down and it does not move; the b*tch doesn’t budge”. I will certainly be investing in this eyeliner. Ending this topic of conversation with Liv stating that she’ll come off stage and her “eyebrows are half way down my face, but my eyeliner has not moved”, I stated that it was forgivable as they are the silly little eyeliner band, not the eyebrow band.

Moving on to the topic of social media, Crawlers press release states that Holly knew a lot about social media beforehand. I find the influence of TikTok and social media incredibly interesting in how it influences the music industry, so I straight up asked how much of Crawlers success do they credit to social media. Holly replied “so I think a good 50%. I think 50% to be honest is our hard work, our work ethic – for example Amy is one of the hardest working people I’ve met ever, we all work so hard, and we don’t kinda slack”. This offers me an insight to the band dynamic and the immense respect they have for each other.

Holly went on to reveal when she was younger, she “was a little STAN-ey”, with fan pages and all, “so when the band happened, even before we had our first single, I plugged it that way”. Of course, as TikTok blew up in popularity over lockdown, Holly stated that “I just blew my eyes – I think I need glasses now because I looked at screens so much, just like gauging what you need to post on there all the time”. Whilst its clear social media has been incredibly beneficial in Crawlers success, I think it’s fair to say that their commitment to maintaining this online presence is impressive, and “lockdown did have a big role in allowing us to have the opportunity to build our online presence” (Liv).

confronted the label about the single today #fyp #originalmusic

♬ convince our label to release this – CRAWLERS

I asked if musicians are being forced to become content creators, this received a more ambiguous response of “depends”. Holly said, “The thing is for us it’s a fortunate thing, because we are very social media driven band. I grew up as chronically online to be honest. I’m very used to being online”. They, however, did show sympathy towards independent musicians because “you have to be your own PR person, your own social media creator, your own manager. You also have to be writing the songs and performing the songs, being enticing with your image…”; they added, “I don’t think people give independent artists enough credit”. They also said that “social media is key, it just depends on who runs it” – i.e., is it the artist, manager, independent label, or major label.

Showing off their understanding of the complex relationship of musicians and social media, Liv expanded that “you still have to be able to translate your online presence into the real world, or the industry, because you can have so many followers and fans online, but if you don’t have much of a presence in the industry then there’s a massive drop in engagement”. Holly added that when ‘Come Over (Again)’ went viral they “had engagement online as a social media presence rather than musicians”. This was bittersweet as they had people commenting “Love you guys!! Never listened to your music before… but love you guys!!”.

Expanding on this bittersweet feeling, Holly added that “it’s the best and worst thing for DIY artists; because it gives DIY artists a platform to compete with major label who are using the exact same facilities”. You’ll be pleased to hear that Crawlers do still use their own social media. Holly stated, “I’m still doing it, and they’ll [the label] be like ‘what about this?’, and I’m like ‘No. Trust me, I know that silly clock app quite well.’”. I can confirm that I will, from now on, be referring to TikTok as the “silly clock app”. 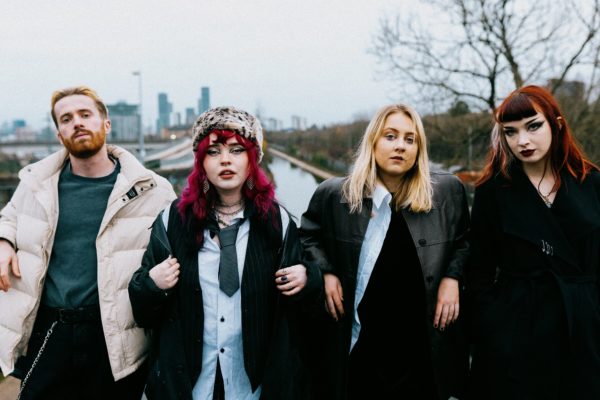 Crawlers latest single ‘I Can’t Drive’ is about the romanticising of mental health in society nowadays, however Amy states that “we marketed it in a way that was quite funny”. This was partially referring to the posters with a QR to the track, and a phone number. The band revealed that the phone number is real!! And they have the phone – they are planning to film live reactions to the voicemails they receive.

I asked the band what the role of social media is in the romanisation of mental illness, Holly replied “even in the Tumblr days, which I was a part of, it was absolutely brutal; like how was it so romantic, especially things like EDs [eating disorders] and other mental illness”. Amy summarised this perfectly: “really triggering things and they were just *romantic*”. Holly added that “its resurfaced again with TikTok” and “it’s a very hard topic. Being a band that has grown up in this media driven society, we’ve faced it a lot”. Holly continued that it wasn’t until her “complete mental breakdown in 2020” where they realised that they hadn’t been taking herself seriously.

Holly expanded about breakups and the romanticising of “What if he can fix me? What if I can fix him?”, Liv interjected “Nah, drop the b*tch”. Everyone needs a friend like Liv.

I asked if writing the song was cathartic, to which Holly replied “Oh my god, yeah! Most of our songs, especially the ones we’ve been writing quite recently, have been, not like my therapy, but they’ve been an outlet”. “Every time I’ve written them, I’ve felt like I’ve uncovered a new part of myself – which is very different to how we used to write. It’s become journaling and it’s very weird to have people relating to those things that feels so personal, but at the same time I guess we’re all going through it.” Liv added “We’ll literally have a mini breakdown over something that we’ve just written, and then we release it, and other people are also having that many breakdowns with us”. Asking if it’s nice and reassuring when people relate back, the whole band jumped in stating its “gorgeous”, “insane”, and “incredibly reassuring”.

One of Crawlers upcoming songs is called “F**k me”, a powerful title with a deep meaning. Holly stated that this song is the first song where its “kind of deeply traumatic because it basically covers two instances of sexual assault” and also “where you instantly think that sex is what love is.” We spoke about the idea of being kissed, just to be kissed, without intentions, and the “horrible realisation” of having never experienced this feeling; Holly added the song is “very deep, and it’s a hard song to sing sometimes”.

The song has clearly already been well received, with fans approaching the band after gigs saying thank you and that they feel heard. They also stated that they are going to be careful when planning this campaign because it’s such a triggering and sensitive topic, but also because they want to be able to help. This linked perfectly to asking about accessibility and inclusivity at their shows. Holly stated that at the beginning of a set they give a speech covering gig etiquette, from falling over to someone having a panic attack. The whole band stated that they “never want anyone to feel uncomfortable at our shows”.

Finally touching on their upcoming tours, Crawlers are touring North America in June, and a headline UK tour in October/November. In comparison to their last tour, they are doing “some new cities, some new ones, but a lot bigger venues” including Islington Academy in London and Academy in Liverpool. You can purchase tickets here!

Saint Etienne Live Review: Back with a splash

Izzy Langhamer reviews the latest ‘Saint Etienne’ gig, which saw them perform latest releases from ‘I’ve Been Trying To Tell You’, as well as fan favourites and 90s hits