Pottering around at HandleBar

Reminisce your crunchy childhood by filling your evenings with arts and crafts at Fallowfield’s latest bar: HandleBar. From Drink & Doodle, life drawing to pottery with Dave, you’ll become an artist in no time
Arts

If you’ve read our latest Fallowfield review, you know that HandleBar has a lot to offer. From cakes, pints, venue space, and bike workshops – the impressive new business also hosts a variety of craft events throughout the month. The latest? A very wholesome session of ‘Pottery with Dave‘.

I’ll set the scene for you: It’s the night of Halloween and three Toy Story aliens have stumbled into HandleBar. Was anyone else dressed up in dungarees and headbands? No, but that didn’t matter. The night was young, and there were ceramics to be made. The result of that evening’s crunchy festivities can only be described as breathtaking and boozy, with our homes since littered with handmade clay pumpkins. What more could you ask for on Halloween?

The night started by grabbing a few drinks at the bar and mingling with fellow wannabe potters. Steve, the owner of HandleBar, welcomed everyone enthusiastically, setting a cosy and friendly atmosphere for the night ahead. There was a host of people at the event – from students to couples, to Didsbury stragglers eager to drink wine and sculpt. It was a strong turnout considering Halloween in Fallowfield is a night typically spent getting drunk on cheap vodka from New Zealand Wines. At HandleBar, not only were we preing with banging tunes on comfy sofas, but the heating was on! I knew where I’d rather be. 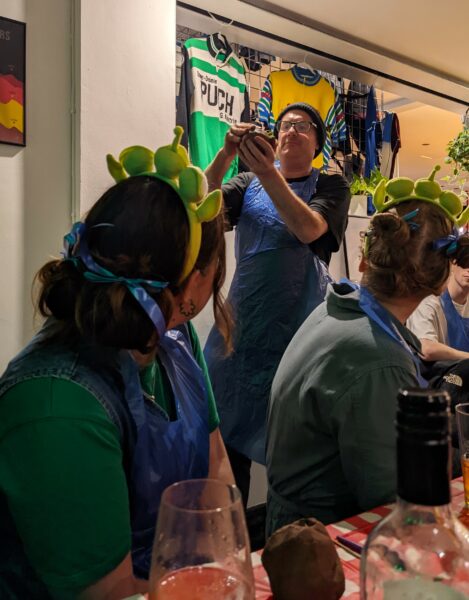 Drinks in hand, we were guided to the back of the bar where there were tables equipped with all the tools we’d need. Aprons, sieves, fine needles, boxwood modelling tools, paint brushes, and generous slabs of clay were set out for each table. The main aim? To make pumpkins. There was an endless array of creative paths to take – all of which were encouraged by Pottery Dave.

During a quick tutorial on how to make our pumpkins using the pinch pot method, Dave explained the natural science of the clay we were using. Turns out, clay is incredibly sustainable, with our clay needing only an air-dry in order to set. We could also shape it any way we wanted, with the support of Dave, who taught us how to use each tool and create texture with sieves. After just five minutes of clay education and comedy from Steve, we were ready to seize the night with our pottery skills!

In total, we had two hours to make whatever pumpkin our hearts desired, driven by the knowledge that we were, in fact, competing against one another. There would be three prizes, all judged by Steve and varying in value, which encouraged an unexpected eagerness to create something totally unique. This did mean some of us went a little rogue, with results differing in beauty.

Notably, Dave was a constant and welcoming presence throughout the event, chatting with guests and giving tips. Turns out, the man has an impressive history with Manchester’s architecture and has sculpted everything from huge chimneys to school murals. It’s fair to say HandleBar sourced a great teacher.

The sculpting itself was really fun, albeit reminiscent of primary school art classes with our messy hands and unlimited imagination. There seemed to be no finish line with our clay masterpieces – there was always something new to add. For instance, why stop at a stalk and eyes when you can make moustaches, eyebrows, hair, cheeks, or tongues?

Even better still, our pieces weren’t confined to mere mantle decor. By creating a lid at the base of the pumpkins, we could create tealights, transforming our creations into actual jack-o’-lanterns! This aspect added to the wholesomeness of the workshop.

The session never felt rushed or tiresome. Nor did it feel dependent on drinks like most nights out. Instead, it was therapeutic. There were no expectations or pressure to make something amazing. It was freeing to play with clay and just see where it went. Over the course of two hours, I made two ghosts (just because I could), a tiny pumpkin, and a pumpkin tealight. Even if my sculptures didn’t look as elaborate as other guests’, there was still a sense of pride in what I’d made.

As for the competition, alas my table did not win. Pottery Steve spent the night slyly judging from afar, before bounding back at the end of the session, slapping his own creation on the table. Turns out, he’s spent two hours crafting what can only be described as more of an aubergine than a pumpkin.

The next ten minutes were tense, as Steve scrutinised the works before him, and also tried to recall what the prizes even were. The outcome of the event was impressive, with creations ranging from hyper-realistic pumpkins to goofy ensembles. It was stiff competition. Either way, everyone was a winner that night, and all participants walked home with a new skill and home decor.

Overall, I’d definitely recommend HandleBar art workshops. It’s a chance to have a social evening without feeling like you’ve left the house. Plus, you can be back in bed by 10pm! It seems HandleBar is an undiscovered asset in Fallowfield waiting to take off, and I can see why. They have something for everyone, and I look forward to seeing what they host next.

West Art Collective is an artist-led organisation based in Antwerp Mansion, Rusholme. Known for their impressive art and music displays, the events hosted by the Collective at this iconic Manchester venue do not disappoint.   The Antwerp Mansion, tucked away right off the side of Curry Mile (in the turning next to Cake Box), comes alive […]

Nude painting isn’t for everyone, but it’s a good way to let go of study stress and let your hidden artistic expression flow… and grab a pint after

Alone, in public: Finding solace in the city

Found in details of paintings, landscapes of films, and pages of books, the loneliness of being in a big city is perhaps more widespread than we thought