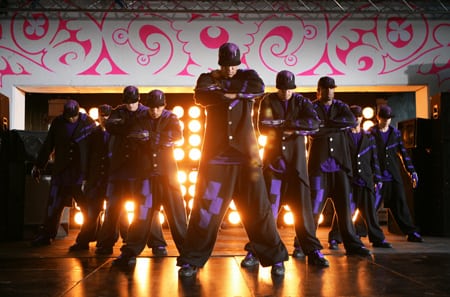 The street dance phenomenon hits the U.K. with the DVD release of Britain’s first 3D film, (yes it’s really taken us this long), StreetDance 3D.
Essentially just Step Up’s slightly chavvy younger sister, this film opens on an inner-city London dance crew, lead by ballsy northerner Carly, (Nichola Burley), fighting to find a place to rehearse for the upcoming National street dance finals.
After a spot of shopping centre busking and a few comical police chases, Helena, (Charlotte Rampling), takes pity on our surly bunch of misfits and offers them practise space in her Ballet school. The catch? They have to include five of the school’s premiere dancers in their routine. Naturally, dance-offs, sexual tension and snarky comments ensue.
Cheesier than cheddar, the old ballet-meets-hip hop story is given a new edge on the sparkling London backdrop. Granted, it’s not quite as glamorous as the Step-Up franchise, but a subtle British influence, (from Union Jack t-shirts to the music featured), adds a certain charm. Cameos by Britain’s Got Talent stars George Sampson, Diversity and Flawless, (appearing as rival gang ‘The Surge’), are sure to entertain fans of the show; and 3D is used sparingly, adding just enough pop to the choreography to be worth the extra £2.50 in the cinema. A feature that is, unfortunately, lost on the DVD edition.

Verdict: While it’s not the worst flick around, this film is no Dirty Dancing either. Aimed primarily at the ‘tween’ market, the predictable storyline is more than made up for with raw energy, light-hearted fun and decent dance sequences.