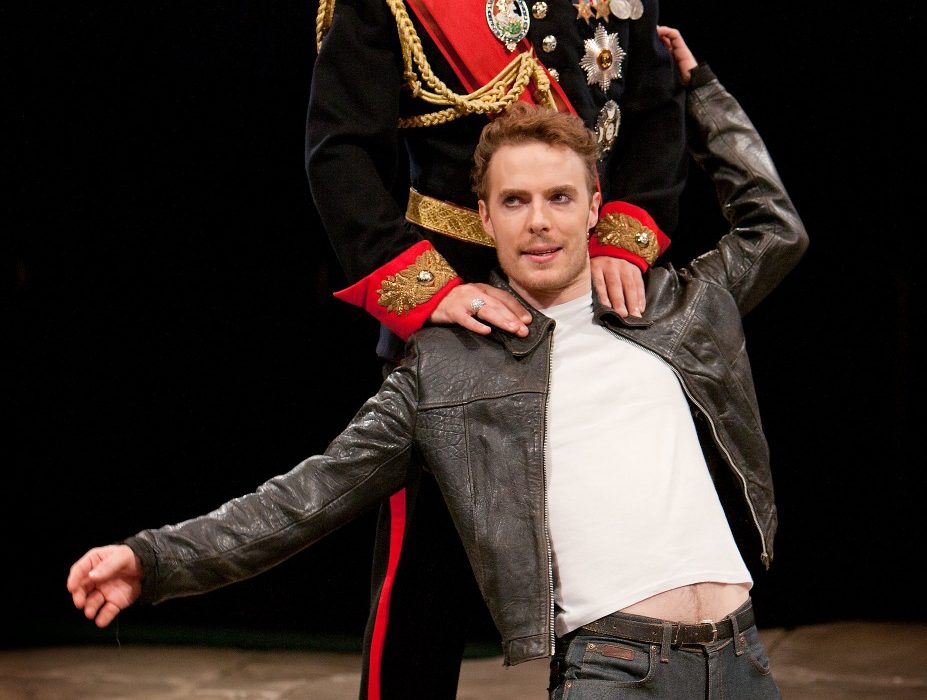 Edward II by Christopher Marlowe a the Royal exchange

Kiss not my hand

Three Stars out of Five

The Royal Exchange dedication to period detail for this production of Christopher Marlowe’s Edward II, updated to the 1950’s, cannot be doubted. For half an hour before the play is scheduled to begin a jazz band fills the building with music and actors are on stage smoking cigarettes, dancing and drinking coffee.

King Edward, played by Christopher New, has inherited the thrown from his father but instead of being reoccupied with leadership he is obsessed with his friend Piers Gaveston, played by Samuel Collings. The king’s infatuation with his friend enrages his noblemen, destroys his marriage and sets him on course for war with his former allies. The play explores the role of individual’s emotions and passions within political systems. King Edward is suffocated by his responsibility and unable to balance his personal desires with his political responsibilities.

Setting the play in the 1950’s allows the director to vividly demonstrate Edward’s homosexuality and contrast Edwards’s desires with the reality of his political life. The play opens with Gaveston, young, in tight jeans and a t-shirt, relaxing in a Parisian Jazz Bar; Edward invites him to come out of exile and back to England. Paris is quickly contrasted with the drab 1950’s England with its red-faced old men in suits. New and Collings are electric to watch as the unbalanced king and his lover. New plays Edward as every bit the ranting and raving madman, fixating on Gaveston to the expense of everything else in his life.

The lively staging does at times feel out of pace with what is occasionally turgid writing. The first three acts contain unnecessary comings and goings of characters that quickly become repetitive. The tension of the first half an hour is not sustained and the climax before the interval comes as a relief. The final two acts are more dynamic although characters are still shunted between countries and settings to little dramatic purpose.

There is a similar problem with 1950’s setting. The energy of the jazz interludes, the clever use of radio and films projectors and the fantastic evocation of Edward and Gaveston’s relationship cannot hide the fact that large parts of the play consist of bland and interchangeable noblemen spouting dull “Alas, Sir Mortimer” dialogue.

The idea of an establishment unsettled by the dawning of a new generation, represented by the progressive jazz bar, is undermined by the blandness of Edward’s opponents and the outrageousness of his own behaviour. The noblemen don’t provide an ounce of Machiavellian intrigue between them and you are left feeling that they don’t reaction to the situation entirely inappropriately.

The culmination of the play is undoubtedly powerful, Edward, stripped of his throne and imprisoned by his former allies is visited by Lightborn, also played by Collings, hired by the nobles to kill him. Lightborn brutally kills Edward, evoking constrains that political realities have put on his personal desires.

The sight of Edward in the final scenes, hooded in a jump suit being blasted with music is clearly suggestive of Guantanamo Bay. The comparison falls flat but, as anyone who saw the Royal Exchange’s ‘War on Terror’ production of Macbeth will know, the theatre does seem to have a weakness for these actually rather cheap points.

This production comes in the wake of the Royal Exchange and director Toby Frow’s successful staging of Marlowe’s Doctor Faustus last year. This attempt to repeat the trick with a modern setting for this 16th-century play is engaging and entertaining although it could have benefited being bolder in cutting parts of Marlowe’s work.

Tickets are available for five pounds to students and those under 26 on Mondays.