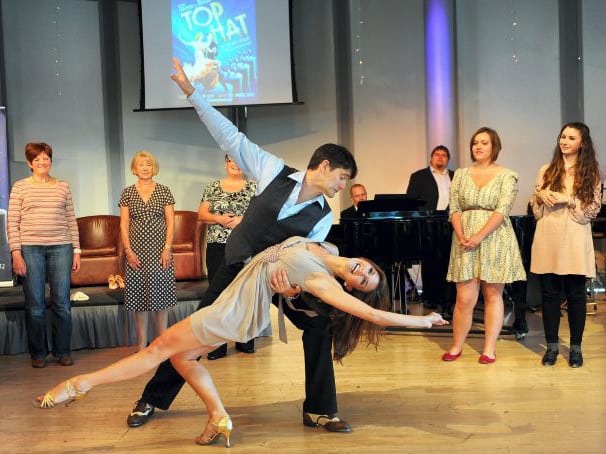 Stopping at The Lowry on a tour of the UK, Top Hat is a new musical based on the 1935 Fred Astaire and Ginger Rogers film of the same name.

Tom Chambers and Summer Strallen star as the glamorous Jerry Travers and Dale Tremont., who, by a series misunderstandings and mistaken identities, end up singing, dancing and exchange witticisms across Europe.

This production leaves you astonished that this is its first time on stage. In its favour, the production is slick and flows remarkably well. The story hasn’t been plastered arbitrarily around the songs. The original film only contains five Berlin songs and ten others from the songs-writer’s repertoire have been added but well-known tunes such as Lets Face the music and Dance and Gentlemen Prefer Blondes don’t feel out place. The farce is well constructed and entertaining if entirely conventional. The dancing is impressive and similarly the singing. There is nothing particularly modern about Top Hat, the characters; gold-digger wife, charismatic American, eccentric butler are rehashes of familiar characters but the cast play them with flair. The character Alberto Beddini, in the form he appears in the stage show, was apparently created through a workshop process. It is difficult to believe that this could have taken long; the character is a stock flustered Italian who mispronounces his English but clichés are obviously difficult to do well. The actor Ricardo Afonso plays the role without any detectable irony but is an invaluable addition as the farce reaches its climax. At 171 minutes, the running time possibly reflects a desire for audiences to feel that they are getting their money’s worth and more than any artistic considerations.

Nostalgia is clearly part of Top Hat’s appeal, the average age of audience members was unusually high, and maybe the appeal to younger audiences isn’t immediately obvious but this type of well-made escapism clearly isn’t going out of fashion. For a new musical to nearly pack out The Lowry’s Lyric Theatre on a Tuesday evening, with an, at times, over-zealous audience, is no mean feat. Expect Top Hat to be a very popular success.

Top Hat is on at The Lowry until Sat 8th October.

Tickets are available from £19 for students.