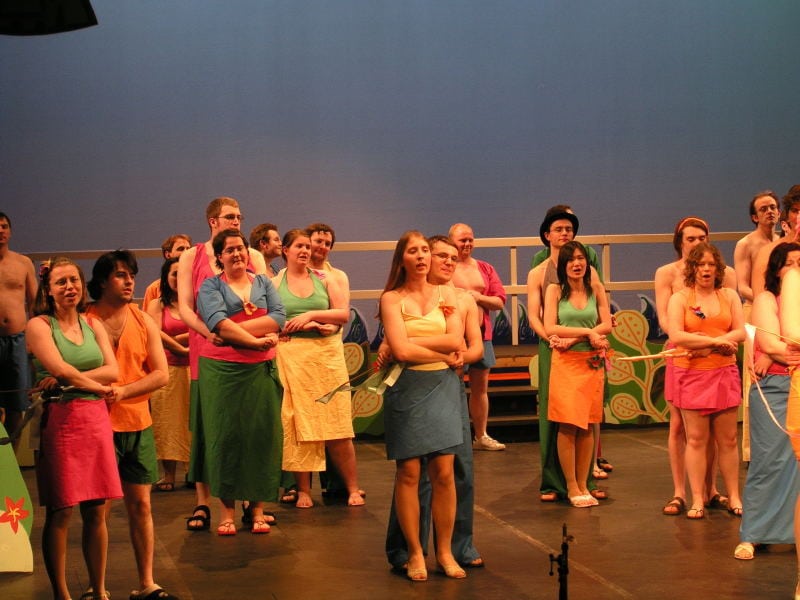 Two out of five stars

As Manchester Universities Gilbert and Sullivan Society has been running for 60 years now, it seems fitting that, as well as producing one or two Gilbert and Sullivan shows each year, they modernise the 140 year old musicals by mixing them up with modern pop songs. The catch? They only have 24 hours in which to cast, direct, rehearse and perform the entire thing.

It tells the story of four friends on a trip who, surprisingly, get a flat tire and end up in ‘The Village’, a cursed place where the number of people has to remain constant. Only two of the friends can stay, so, through a series of meetings, relationship switch-ups, disagreements and the like, (and a song or two along the way) two of the friends decide to stay.

The plot and script hardly lent themselves to good drama, but it had its moments. Scott Sharp put his absolute all into it as Brian and Kate Lamb was effortless and natural as Alice. The audience seemed to love the cheesy one-liner jokes, however they did seem a little too ‘in’ on everything to simply be just a neutral audience. I felt perhaps their enjoyment was from seeing familiar faces on stage, rather than watching a successful piece of theatre.

As for the songs, they were (just about) relevant enough to the action and identifiable by the audience. A personal highlight was the MUGGS doing what they do best: the one and only Gilbert and Sullivan number, ‘A Policeman’s Lot’ lead by a well-characterised Sergeant, played by Dan Magnone, complete with humorous bobs from the policemen behind. Another enjoyable tune was La Roux’s ‘Bulletproof’, beautifully arranged and even moving at times. They certainly knew how to please a crowd, with an opening rendition of ‘Don’t Stop Believing’ and ‘Hot ‘N Cold’. Top notes weren’t reached, lyrics were forgotten but generally the songs were a welcome addition to the action.

Although the show had its awkward, fluffed and often irrelevant moments, a certain quality did shine through: the chemistry and bond between the cast as a chorus. Smiles and positivity never faltered and the energy and commitment was impressive. The main thing I took away from the experience however was ‘Why a 24 hour show?’ It seems an insufficient amount of time to really produce anything worthwhile and production-worthy. Yes it was, good fun and that is perhaps that is the true essence of Gilbert and Sullivan; to be enjoyed and to throw yourself in, rough edges and all.

MUGGS’ ‘HMS Pinafore’ is due to be performed in February 2012 and its not too late to be involved. See www.mugss.org for details.