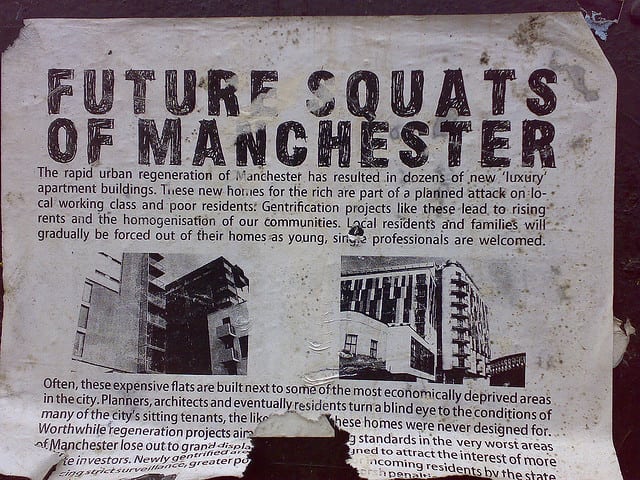 Future Squats of Manchester: this poster, pasted onto the corner of the abandoned Cine City in Withington, reads: "The rapid urban regeneration of Manchester has resulted in dozens of new 'luxury' apartment buildings. These new homes for the rich are part of a planned attack on the local working class and poor residents".

Despite the great controversy that inevitably surrounds them, squatters are not who you may think they are. Squatters are generally the most vulnerable people in society; the people who cannot keep up with the rat race and who fall through the cracks instead. No, not the ‘middle class dropouts’ like tuition fees protestor Charlie Gilmour. I’m referring to the homeless, the physically disabled and the mentally ill. The vast majority of those who squat do so out of necessity. What’s more, the decimation of housing benefits and public services – a result of the Coalition’s savage programme of cuts – is bound to leave increasing numbers of people with nowhere to go.

The criminalisation of squatting therefore fails to consider, let alone address, the underlying problems which the poorest people in our society are facing. There are a number of common misconceptions about squatting, most of which are fuelled by a callous and unforgiving press. Despite much media distortion, tough laws against squatting already exist and are frequently utilised. The home invasion horror stories espoused in the tabloids are simply untrue – squatting should not be mistaken for home invasion, which was made illegal in 1977 in a law established to protect ‘displaced residential occupiers’. Nevertheless, the media coverage of this vital issue continues to be shrouded by a lack of facts, as onlookers refuse to accept the complexity of the issue.

With 737,000 empty and abandoned properties across the UK, why should it be deemed acceptable for the homeless to sleep rough? Squatting is far from an ideal solution to homelessness – but it is an imperfect solution to an imperfect problem. Rather than criminalising the most vulnerable in society, we should instead confront the gross inequality engendered by the thoroughly exploitative housing crisis which is crippling Britain. Numerous charities, such as Shelter and The Big Issue, warn that the criminalisation of squatting will drag the country’s most vulnerable people through the criminal justice system. Where are these homeless people expected to go? It seems deeply immoral to criminalise people for having nowhere to live.

Furthermore, we must remember that the financial crisis was partially caused by a housing crisis – it was, after all, the reckless banks who lent extortionate amounts of money to poor families so they could fulfil the fictitious dream of house-ownership. This unsustainable, unaffordable dream quickly collapsed. Now, properties are being widely repossessed all over the country. Britain’s housing conditions are among the worst in western Europe, with five million Britons currently sitting on council housing waiting lists. The current situation is a travesty, and it is simply horrendous to think that property speculators, unscrupulous landlords and buy-to-let parasites should allow their ubiquitous properties to lie empty, whilst others have nowhere to go.

Contrary to popular belief, squatters invariably improve the conditions of the houses they inhabit. According to the charity Crisis, the vast majority of squats have been empty for ten years or longer and are in terrible condition, with broken windows, lacking water, heating and electricity and crawling with vermin. Time and time again, squatters dramatically regenerate these properties, transforming them into liveable spaces. Can transforming these desolate, long-forgotten buildings into communal hubs, which host workshops and film-screenings, really be considered a crime?

This proposed legislation also poses a serious threat to popular protest tactics, which could conceivably make occupations a thing of the past. Criminalising squatting would have a fundamental impact on students, as rather than occupations being a civil matter, dealt with by the university and the courts, occupations would be dealt with by police who would hold the power to interrupt such a protest by arresting each and every occupant. Last year, occupations were held on campuses across the country in response to the rise in tuition fees – including our very own occupation here at the University of Manchester’s Roscoe Building. The National Union of Students has joined the campaign against the criminalisation of squatting, promising that it will “mount a campaign which will make it politically impossible for the government to introduce such a law”. Whether or not the NUS succeeds remains to be seen.

There is clearly a more sinister logic behind this legislation, as the government hopes to put a stop to struggles for social justice in our cities. Today we are living in increasingly divided, unequal and unjust urban settings; the squat is one of the few remaining places where people can live communally and creatively. The criminalisation of squatting will solve nothing. Instead, it will further burden the criminal justice system, the police and charities – not to mention the squatters themselves, who will be criminalised for their own vulnerability. If the government wants to find a genuine solution, they must see squatting as a welfare and a housing problem rather than a criminal issue.