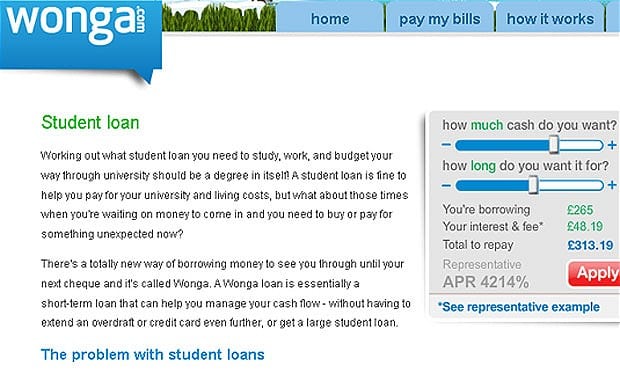 Wonga removes “predatory” offer from its website, after protests

Payday loan company Wonga has removed pages from its website after it was branded “incredibly irresponsible” for targeting its services at students.

The National Union of Students (NUS) attacked the firm for its “predatory” attempts to attract students to its lending service.

The company, which offers small loans designed to be taken out over short periods of time, had suggested its loans may have advantages over official student loans.

For example, the site used to read, “When your mates tell you about finding a deal on plane tickets to the Canary Islands, you’ve got some options. Maybe you don’t have the money to pay for the whole thing now, but you will when you get your wages at the end of the week. Enter, Wonga!”

However, the page in question failed to mention that it charges an annual interest rate of 4,214%, while the current student loan rate is just 1.5%.

NUS vice-president, Pete Mercer, said, “It is highly irresponsible of any company to suggest to students that high-cost short-term loans be a part of their everyday financial planning.

“Students should think long and hard before choosing payday loans over any other form of borrowing, including government-backed student loans.

”If students are struggling to make ends meet there is often other support available, and anyone worried about their finances should talk to their students’ union or financial advisers at their university.”

The Wonga website now features an apology in place of the offer, which states that, “We took [the page] down because we do not actively target students as potential customers and we wanted to clear up any confusion about that.”

The company states that, “The main purpose of the content was search engine optimisation, or ‘SEO,’ which is a common practice for any internet business that wants to appear in searches for relevant subjects.”

Despite the negative publicity surrounding payday loan firms, the Office of Fair Trading has said that they should not have their interest charges restricted.

In a recent review of high-cost credit, they concluded that they provide a useful service for some people who would not otherwise be able to borrow legitimately and who might thus be forced to borrow from illegal loan sharks.
Wonga says that its loans are still available to students who have a source of regular income.