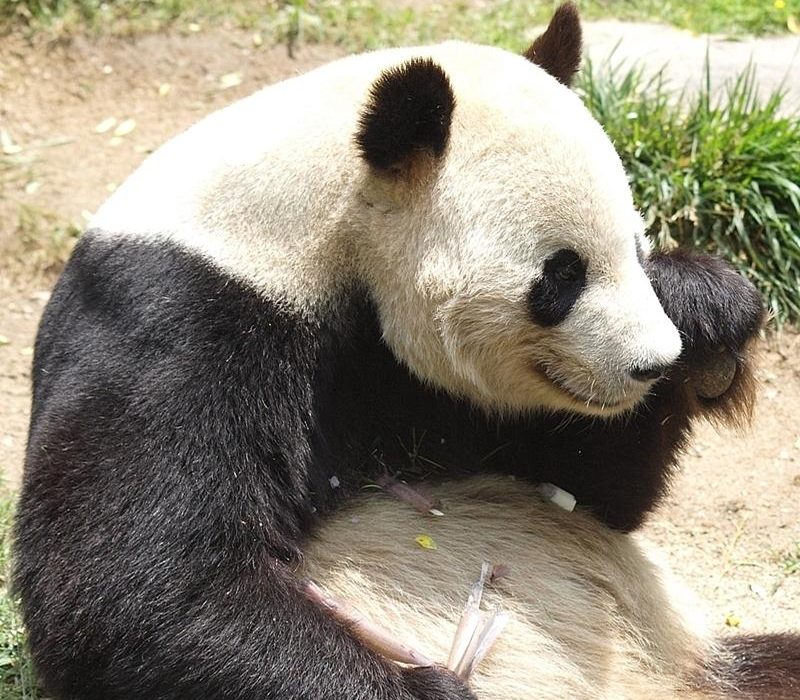 A panda eats, shoots and leaves to extinction?

Teary-eyed naturalists may soon be making space on Darwin’s sentimental shelf of evolutionary dysfunction for the giant panda, ironically the immortal symbol of world conservation.

The epitome of dire survival ineptitude, the panda is built like a carnivore but sustains itself solely on low energy bamboo, and with such a pathetically comical appetite for lust, many leading conservationists believe this bear of the orient will never be able to survive in the wild successfully. Sympathetic athropomorphists may fear that the world has simply become fed-up with the giant panda’s forlorn efforts to survive in the wild.

Conservationists are now deliberating whether to accept the inevitable demise of such an endangered species, nervously discussing this paradigm shift of triage to focus efforts and funding on more hopeful endangered prospects. This may be the most pragmatic approach to take as some species, such as the giant panda and tiger, may simply be too expensive to save.

A survey of 583 scientists, conducted by Dr Rudd of the University of York, found an unsettling, albeit unsurprising, unanimity in the conservation community’s expectation of a major loss in biodiversity, as well as the crushing present reality reluctantly squeezing concepts such as triage out of their taboos. The study revealed that 99.5 percent of the community surveyed viewed that a serious loss of biological diversity is either ‘likely’, ‘very likely’ or ‘virtually certain’; with the tropical bounty of diversity that is the coral ecosystem expected as the unfortunate vulnerable habitat to be most seriously affected.

A remarkable 60 percent of respondents were proponents of decision criteria for the unashamed pragmatism of conservation triage to be established, in which resources are prioritised to not intervene to save some highly threatened species and focus on more buoyant conservation prospects.

Rudd identified the critical need for such a study: “As with climate change, the large level of investment needed if loss of biodiversity is to be stopped will result in an increase of public and political scrutiny of conservation science…That makes it important to show how much scientific consensus there is for both the problems and possible solutions.

“The survey posed the key questions facing conservation science: why people care, how priorities should be set, where our efforts should be concentrated and what action we can take,” commented Rudd. “Scientists were also asked about a range of potentially controversial statements about conservation strategies to gauge shifting opinions.”

Away from the public discord of the climate change community, naturalists were much more harmonious in their views of toxic human influence. In this survey, 79.1 percent of respondents stated that the acceleration of the loss of biological diversity due to human activities is virtually certain. In contrast, the survey of the bedlam over in the climate change camp inconclusively concluded that 61.9 percent thought climate change was underway, whereas only 55.1 percent  believed it to be accelerated by humans.

“Understanding the degree of consensus within the scientific community will help policy makers to interpret scientific advice, improving the likelihood of successful conservation initiatives,” concluded Rudd. “The extremely high level of consensus demonstrated by these results underlines the urgency of preventing further damage to the natural world.”

The debate is controversial, with wildlife experts and organisations disagreeing over the best course of action to take.

Paul Goldstein, a wildlife guide, acknowledged the controversy intrinsic within triage but maintained such action was necessary. He was unequivocally vocal in his assessment of certain endangered species which “cost too much to keep up and have little chance of ever living a natural life”, such as the giant panda. Goldstein was adamant that emotional provocations should be dispelled and the panda allowed to slide off the existential bamboo stalk into the abyss.

Diane Walkington, Head of Species at WWF-UK (World Wide Fund for Nature), argued against the application of triage, identifying the uncomfortably potent question of “Who will be charged with deciding which species should be saved above another?”

Proponents of triage have accused certain preservation efforts, such as for tigers and the giant panda, of not being pragmatic but merely buoyed by public adoration. However, Walkington identified that current conservation toiling largely equates to working to preserve a species’ habitat, and thus all the endangered species which share their habitat too. So she concluded that “wildlife, the environment and human activity are interlinked and it is clear that any effort to safeguard the natural world must be a package deal”.

Conservation scientists are not so arrogant or set upon a utopian ideal to believe the whole world will wait upon the findings of their collective conscience. It is fully understood that economic incentive has proven to be the only unfailing method to save species. The rewards for locals provided through conservation activities must be greater than the rewards for poaching or using the land for building and agriculture. With such an impending collapse of biodiversity on the horizon, clarifying academic opinion is a vital precondition to successful political lobbying, even if such discorded opinion over whether to bolster or desert the panda’s cause illustrates that the employment of triage is not black and white.