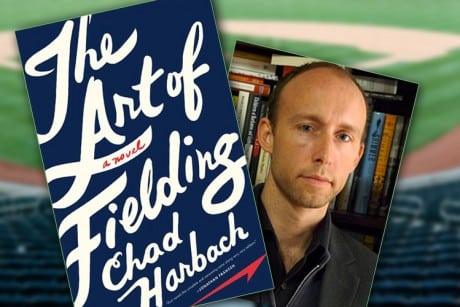 Review: The Art of Fielding by Chad Harbach

What I read about The Art of Fielding (TAOF) in online reviews: Henry Skrimshander is a young baseball genius who might just be good enough to lead perennial no-hopers Westish College all the way to the championship. But – uh-oh! – one bad throw causes him to lose his nerve! There are also 4 other characters. There’s a statue of Herman Melville in the university quad and he appears a lot in the pages. Don DeLillo is between the lines. Jonathan Franzen is on the cover. It’s not really about baseball.

What I found when I actually read all of the words in TAOF: While it’s initially hard to forgive the book’s desperate desire to be The Next Great American Novel –that Melville statue is particularly face-palmy– it becomes a lot easier once you realise that it is, in fact, The Next Great American Novel. This is a huge, charmingly flawed, big-hearted feast of a book, ferociously modern and mind-meltingly compelling – an achievement befitting the ramshackle country that birthed it.

OK, look, Franzen on the cover isn’t a coincidence: this is the book that proves American literature has finally shaken off the Updikes, Roths and Pynchons; finally written enough new stories that it’s no longer engaged in a boring conversation with itself about facts like, say, that The National Pastime has been used as synecdoche for the entire nation before. TAOF is a fulfilment of this new tradition, and testimony to its forward momentum. It’s also so confident of its place in this contemporary order, and so complete in its allusions and aspirations that the only thing that’s not totally convincing about TAOF, despite all its silliness, is that it’s Harbach’s debut.

One last thought: anyone ruminating about becoming an author, while wondering how they’re going to get paid in these financial crisis-afflicted times can draw solace from that fact that TAOF was bought for a record $650,000 advance. Home of the BRAVE.