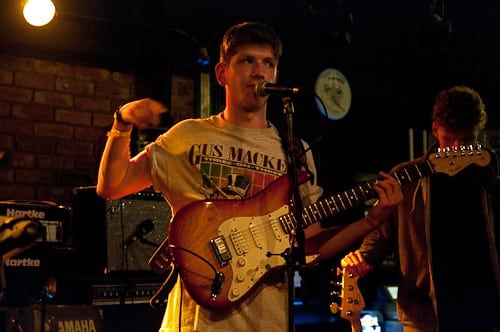 If I had a teenage daughter, by way of some Marty Mcfly style tampering with the fabric of time and impregnating your mum in the past (what can I say, she was hot), the members of Dog Is Dead are exactly the type of wholesome looking lads I’d be happy to have round for dinner and light conversation. Their youthfulness spills over into the performance, visibly enjoying themselves with smiles all round as they launch into opener ‘River Jordan’.

They may look like your average indie boys but as the set darts, ducks and weaves through unexpected twists and turns, it soon becomes clear that these guys are gifted songwriters. Instruments are swapped and the songs show high levels of craft from a band that have been on the road for almost two years now, honing their skills whilst supporting the likes of Bombay Bicycle Club.

Vocal harmonies abound, most notably on ‘Young’ with the line “Hold your breath and count to ten, we’re losing touch, we’re losing friends”, capturing the audience by the throat as the words resonate strikingly into the revered quiet of the room. New single ‘Two Devils’ throws up snapshots of ideas like photos taken from the window of a speeding car and there was even a Pink Floyd-style saxophone lead jam later before throwing the audience sharply back into the main tune.

After a bagful of catchy choruses, Dog Is Dead wind up their set to an appreciative reception from the 120 or so fans that made the trip to the Deaf Institute – a great turnout for a band who are yet to release their debut album. With material that is meaningful without forgetting how to be fun, they produce a feel good vibe that will hold the band in good stead for the coming festival season.