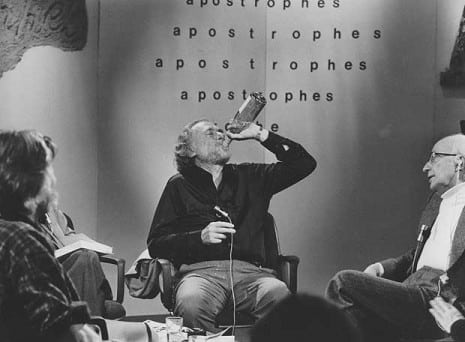 Jake Barnes – Despite a very unfortunate war wound – still manages to live it up, leading a merry band of ex-pats from Paris to Pamplona in order to attend a fiesta. Hemingway’s conduit for the Lost Generation’s itinerant angst became an instant classic as wine flowed, bulls fought, hearts broke, and then wine flowed some more. Also, wine.

2. Tender is the Night by F. Scott Fitzgerald

While some of Fitzgerald’s creations were content to stay in West Egg, NY during the prohibition years and try their luck with the bootleggers (spoiler: they manage OK), socialites Dick and Nicole Diver make it across the pond to the French Riviera, where things are a little more, err, liberal. Famously brilliant but flawed- Fitzgerald was hitting the sauce pretty hard as he wrote it; his life falling apart in a fashion every bit as dramatic as the novel’s wasted protagonist.

Wherein Bukowski’s fictional stand-in Henry Chinaksi narrates the real-life mess that was the liquor-soaked struggle to get Barfly produced- the film based on his book of the same name. Which was also about getting whitewashed. Chinaski acquaints himself, after forty years of working menial jobs, with the concept of an open bar. Everyone is drunk, all the time.

Sebastian Flyte, who we first encounter at Oxford clutching a huge teddy bear named Aloysius, is, by the mid section, instead gripping a glass of whatever he can afford. By the book’s denouement, he’s after anything he can lay his hands on. Being both fabulously wealthy and devastatingly charming however, this turns out to be quite a bit.

5. The Liars’ Club by Mary Karr

In Karr’s childhood memoir set in the ‘suckhole’ that is Leechfield, East Texas, she is perhaps the only member of her gloriously fucked-up family that isn’t permanently smashed. Except when she is.

Honourable mention: The Odyssey by Homer

In literature, the tradition of a strong stomach and a weak liver started early. Homer’s epic poem tells the tale of Odysseus’s twenty-year journey home from Troy to rescue his wife, son, and estate from a gaggle of tipsy suitors. Along the way, our hero doesn’t exactly shy away from pouring many, many libations of wine himself.