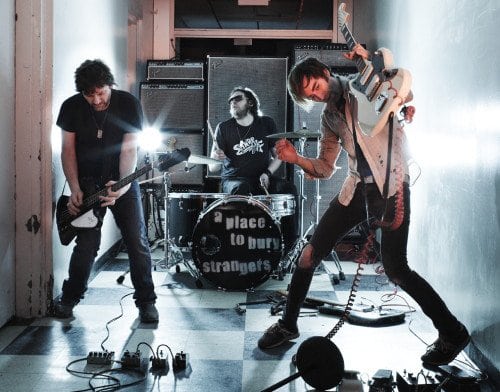 A Place To Bury Strangers

Live: A Place to Bury Strangers

It’s not unusual for the name of a record to reflect its sound; The Beatles’ Revolver sowed the seeds of the psychedelic rock revolution, Nirvana’s Bleach is as sonically caustic as the substance it describes, and The Vaccines’ debut What Did You Expect from a Bunch of Privately-Educated Careerists Other Than An Insipid Collection of Piss-Weak Rip-offs? pretty much speaks for itself. On the same tack, the last full-length effort from A Place to Bury Strangers, Exploding Head, is a startlingly accurate summation of the live experience they offer.

A three-piece from Brooklyn, New York, the band’s live shows are often spoken of in the same breath as other such decibel-mongerers as My Bloody Valentine and Mogwai – the Washington Post called them “the most ear-shatteringly loud garage/shoegaze band you’ll ever hear”. Tonight’s their first Manchester date in nearly 2 years and with only the EP Onwards to the Wall released since, on which the band opted to smooth over some of the rougher edges and generally played it disappointingly safe, the set looks likely to be dominated by older material.

There’s certainly plenty of it – Exploding Head‘s ‘It Is Nothing’ is a particularly blistering highlight – but in addition to tracks from Wall, the band incorporate a generous preview of forthcoming LP Worship. Unfortunately, the fact that the EP material sounds much more abrasive played live means it’s difficult to know whether Worship really will turn out sounding as epic as it does tonight, with extended instrumental sections, but it certainly inspires hope for long-term followers.

What isn’t in doubt is that the band remain on rare live form – tonight they play in Sound Control’s surprisingly intimate ground floor bar, and there’s no skimping on the volume, dry ice or stage antics, particularly from bassist Dion Lunadon, who moves from playing atop a speaker stack to closing out the set amidst the crowd. Musically, they rarely deviate from their own tried-and-true formula, but when the live performances are this exhilarating, it’s difficult to care.

A Place To Bury Strangers – So Far Away