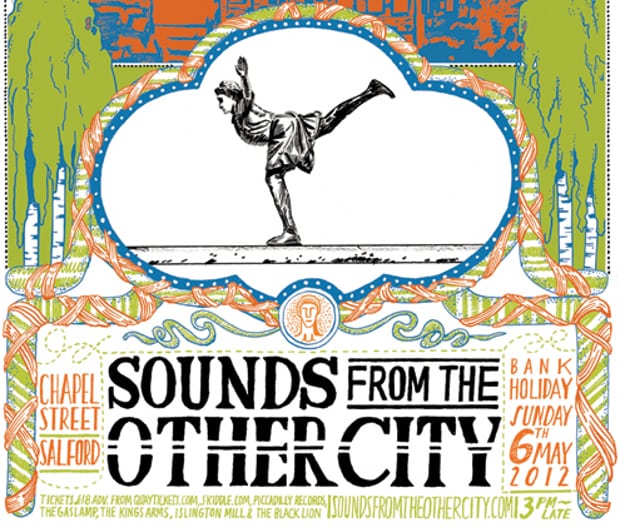 Live: Sounds From The Other City

Sounds From the Other City
Chapel Street
6th May
4 Stars

Returning for the seventh year in a row, Salford’s Bank holiday bash has improved immeasurably from its humble beginnings while still retaining the quirkiness that made it such an intriguing prospect in the first place. The day began at Islington Mill, where early birds were presented with the bewildering sight of a dance troupe in costumes that Noel Fielding would probably like to borrow, while on stage a mustachioed woman played recorder over Casio beats. It was all getting a bit Nathan Barley, so we made a a quick sortie to the Old Pint Pot for a few tinnies by the (surprisingly clean) canal before returning to see Fear of Men. Despite being dogged by sound issues, the group valiantly performed a charming blend of Doo-wop vocals and Dinosaur jr. style riffage to a sympathetic audience.

The day then seemed to disappear as we rushed between Chapel Street’s pubs and churches, taking in the visceral, bluesy thrills of Stalking Horse, Lazer Dream Eyes’ mid 60s garage racket and a very trippy soundtrack set from experimental rockers Islet. However the real highlights came later on, with a mesmerizing hour of downbeat, jazzy electronica from Greek duo Keep Shelly in Athens, who expanded their line up with Drums, Double Bass and Guitar to great effect.

Back at the Old Pint Pot, Brooklyn glitch-hop producer Shigeto impressed his audience of beat-freaks with a set that mixed dextrous MPC manipulations with some mind-boggling live drumming, culminating with a bowel-quaking Hudson Mohawke remix that rattled the foundations of this usually quiet local boozer. We rounded off the evening in the Mill, where a room was converted into a Hacienda-style disco playing the greatest in early 90s house and rave tunes to a delighted crowd who weren’t quite ready to go home yet.